The reasons boys are falling behind run deeper than culture or politics. For evidence, just take a look at a map. Girls are leaving boys in their educational dust almost everywhere, from the Nordic countries where students are lauded for being top performers, to Middle Eastern countries, where feminism can't take credit. A pedagogical smorgasbord of approaches has been tested, small movements are afoot, and, in some cases, the gap between girls and boys is not even seen as such a bad thing.

Finland earns plaudits on the international stage for how its students rank in reading, math and science tests. But a look behind the big numbers shows that there are problems brewing.

Girls are consistently doing better than their male counterparts in reading and science, and they're not that far behind in math, according to a 2006 survey of 15-year-olds conducted by Paris-based Organization for Economic Co-operation and Development.

The problem of boys lagging in school is widely recognized. It's just a matter of addressing it, said Pasi Sahlberg, a former senior education specialist at the World Bank who now runs the National Centre for International Mobility in Finland. The movement may not be as strong as the one in North America, or even some other developed countries for that matter, but steps are being taken to curtail the widening achievement gap.

Textbooks have been modified so they don't enforce traditional gender stereotypes. Quite the opposite in fact, with many authors presenting alternative role models for boys and girls: men using vacuum-cleaners and girls changing light bulbs. And adjustments are being made to the selection of reading materials. "Now pupils can choose from the menu of different books and readers, like Harry Potter, to get into the reading flow. Girls have always been more comfortable and attentive to reading what teachers have suggested. Now, there is much more choice," Mr. Sahlberg said.

Finland's students who are lagging behind or have particular learning difficulties can also be subject to a personalized study plan, where they get special attention from an instructor. Mr. Sahlberg said the threshold to be included in special education is very low, and boys who are struggling normally find themselves in the program.

He said it helps the student when rolled out properly, but since there's no centralized control of how the program is running, it's difficult to pinpoint its success rate.

"We are very well aware of ... the fact that boys and girls are achieving differently in the classrooms and in similar instruction," he said. "The issue is really we are not fully utilizing the instrument that we have available and we have to work harder for that."

"Boys are having problems at school. They are experiencing learning difficulties and behavioural problems, and the literacy gap between boys and girls is increasing."

Those words, on a government news release dated June 19, 2000, set into motion one of the most ambitious inquiries into boys education and resulted in millions of dollars being poured into schools to close the achievement gap.

The Australian government initiated the Boys Education Lighthouse Schools project, and followed up with the Success for Boys initiative, targeting at-risk and disadvantaged boys with activity-based learning, mentoring programs and guidelines for schools. Grants were provided to schools to document successful practices. This came despite arguments from some that boys shouldn't be treated as a homogeneous group.

"Finally government admitted we had a problem," said Peter West, an educational consultant based in Sydney.

But the success of those programs has largely been muted, and they appear to have faded into the background with successive governments and a focus now on the economy.

"We need much better data. I think governments are scared to produce it. Every time I go into a school, I ask what problems do you have with boys, and I get a forest of hands," Mr. West said. Those problems, he added, are mostly disciplinary, but also reveal that many boys don't have any interest in reading or writing. Standardized test scores show that girls in Australia and elsewhere consistently score higher than boys in reading.

Mr. West said that elite schools tend to focus more on closing the achievement gap than working class schools. Parents, he said, haven't been shy to hammer on school doors and ask principals how they're addressing the issue. "Boys underachievement continues to be a problem," he said.

In Middle Eastern countries, where so much of the success is focused on boys and the feminist movement is virtually non-existent, girls are surprisingly making some headway. The latest reading literacy study shows that fourth-grade girls in Kuwait and Qatar are not only beating their male counterparts, but they stand at the top of international rankings.

The 2006 Progress in International Reading Literacy Study showed that girls in Kuwait have, on average, a 67-point advantage in reading over boys, well ahead of Canada or the United States. In Qatar, they are 37 points ahead of boys.

The fact that young boys are falling behind would be a cause for concern elsewhere. Not so much in the Middle East, said Alexander Wiseman, an associate professor and director of comparative and international education at Lehigh University in Bethlehem, Pa.

That stems from the fact that boys have fewer worries about finding work after they leave school, regardless of their grades. Social mobility, especially in Gulf countries, is not necessarily tied to school achievement.

"The boys don't have to worry about doing as well in their academics in order to find opportunities outside of school," Prof. Wiseman said. "Whereas girls, if they're going to have any chance, they have to do well."

In fact, places like Saudi Arabia would use the strides made by girls on the standardized tests to argue that they are championing equality, and it's not a case of boys failing.

Prof. Wiseman sees it differently. He said that even though girls may have similar textbooks and lesson plans, it doesn't mean they are regarded equally to boys, especially when they step out of the classroom. "Despite girls outperforming boys on these standardized tests, the real issue I believe is girls having equal opportunities," Prof. Wiseman said. 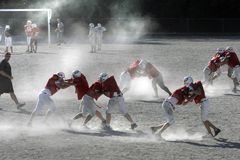