Bolstered by summer success on the battlefield and gambling their military force could have peaked, Taliban leaders have come to the bargaining table in Kabul confident of trading up toward their ultimate goal: Political power.

"The Taliban are obsessed by the state. But they are not revolutionary in the international sense. They don't want to take control of the whole world, just Kabul," said Gilles Dorronsoro, a visiting scholar at the Carnegie Endowment for International Peace and renowned expert on Afghanistan.

Now, for the first time since they were ousted from power by U.S.-led forces in 2001, the Taliban seem to believe that Kabul is once again within their grasp.

Face-to-face talks, apparently taking place inside the capital between members of Afghan President Hamid Karzai's inner circle and senior Taliban leaders, are the latest evidence of a profound shift of attitude toward the movement, from being vilified as the architects of a violent insurgency to being treated as a legitimate political force.

For the Taliban's part, the talks could presage the achievement of their ultimate goal of returning to power, even though it would be limited.

Taliban leaders believe they failed to effectively rule Afghanistan in the nineties because the international community refused to recognize them, isolating them politically and staving off economic aid.

This latest olive branch extended by Mr. Karzai, whose efforts are increasingly backed by the West, represents a golden opportunity for the Taliban to seize some degree of power with legitimacy, analysts say.

"They need negotiations at some point. Why not now?" Mr. Dorronsoro said.

"They may see themselves at a point in time where they have an advantage but maybe won't in six months. They are seeing an opportunity now that they may not have again," he said.

The talks, reported this week by The New York Times, are said to include four senior insurgent leaders - three from the powerful Quetta Shura and one from the hard-line Haqqani network. Mullah Omar, the spiritual leader of the Taliban, is not taking part in the discussions, nor are any American officials.

The insurgents apparently travelled from their various sanctuaries in Pakistan to Kabul with the help of NATO military forces which provided air transport for one leader and secured roads to ensure the safe passage of others. It's the first time coalition forces have supported talks with the Taliban in such an overt way.

The discussions are also presumably supported by Pakistan, whose security services have a complex and often fractious relationship with the Taliban. Pakistan reportedly released Mullah Abdul Ghani Barader, a key figure who served as the Taliban's military chief before he was arrested by Pakistani security forces last February.

Mullah Barader is seen as being open to talks that may have excluded Taliban hardliners before he was rounded up. His release is being interpreted by some as the result of a deal struck with the Taliban that would allow Pakistan to reassert its influence in current discussions.

The discussions themselves are primarily a trust-building exercise, ostensibly to lay the groundwork for real negotiations down the road.

They are, however, taking place against a complicated backdrop of shifting warfare in Afghanistan, political manoeuvrings across the region and growing uncertainty in Washington.

The Pentagon has long argued that talks with the Taliban should begin only after NATO holds a clear advantage on the battlefield. The perception in Afghanistan, and in Washington, however, is that the Taliban insurgency is gaining momentum.

"At this point, things are not going well for us," said Leslie Gelb, president emeritus of the Council on Foreign Relations in Washington.

Still, General David Petraeus, commander of NATO forces in Afghanistan, has said that in the past three months some 300 Taliban commanders have been killed or captured.

Analysts, however, are wary of Pakistan for playing a double game, publicly supporting an end to the conflict in Afghanistan but ultimately undermining any kind of peace that interferes with the self-interest of some of its leaders.

The Pakistani military has in particular been criticized for failing to take decisive action against insurgents operating along the border provinces of Baluchistan and North Waziristan. Its intelligence service, meanwhile, has been accused of protecting the very insurgents it vows to capture.

Some observers say the current talks in Kabul are being supported by Pakistan because it sees an opportunity to influence the outcome so as to increase its own regional power.

"The Pakistanis don't want to go back to the situation in the nineties where the Taliban were part of a rogue state and their influence was not recognized, because Afghanistan was not considered a real state. It was a major headache for them," Mr. Dorronsoro of the Carnegie endowment said.

If the Taliban are ultimately successful, however, in assuming even limited political power in Kabul, the strategy could backfire on the Pakistanis, he warned.

"How will they keep their influence on the Taliban if there is no more fight and if the Taliban leadership returns to Afghanistan?" he asked.

Mr. Gelb of the Council on Foreign Relations believes the current talks are non-starters for all sides.

"Their positions are totally at variance. Karzai, if he made a deal with the Taliban to share power, would be out of power. And the Taliban are not about to change their demand that NATO troops leave. On the basic issues, the two sides at this point have nothing to talk about," he said.

Instead of supporting Mr. Karzai's conversations in Kabul, he says it's time for Washington and the rest of the West to take a much tougher line with Pakistan.

"The Taliban strategy is still to try to wait us out because they think we can't be in there in a serious way for the long haul. … At the moment, they are right," he said. 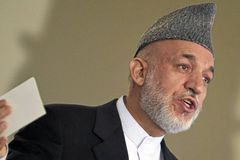