A train carrying crude oil and liquefied petroleum gas is believed to have derailed near a northwestern New Brunswick village after its emergency brakes activated and caused a sudden stop, according to the Transportation Safety Board.

The derailment of the CN train Tuesday night sparked fireballs and a huge plume of black smoke that forced at least 150 people from their homes near the village of Plaster Rock. Fire crews, police and CN officials were at the scene all night. No one was injured but the fire was still burning Wednesday.

TSB spokesman Dan Holbrook told The Globe and Mail that there was also a problem with the axle on the 13th car from the front of the train.

There were 122 cars on the CN train, including five cars containing crude oil from western Canada and four cars containing liquefied petroleum gas. It was on its way to the Irving Refinery in Saint John.

The safety of Canada's railways has been under scrutiny since last July, when a train carrying crude oil derailed and exploded in Lac-Mégantic, Que., killing 47 people.

The crude involved in the Lac-Mégantic crash had been drawn from the Bakken formation, which straddles North Dakota, Saskatchewan and Manitoba. Crude from that region is believed to be more flammable than other types of crude oil.

Jim Feeny, a CN spokesman, said the train was carrying crude oil from Western Canada, but he could not say where, specifically, it was drawn from.

Samantha Robinson, a spokeswoman for Irving Oil, confirmed that some the crude oil on the train was destined for the company's refinery in Saint John.

Although the official cause of the accident is yet to be determined, Mr. Holbrook characterized the incident as provoked by an "undesired emergency brake application."

He said it appears as though the air brake line on the train was interrupted and that caused the emergency brakes to be applied automatically.

The 13th car, which had the axle problem, derailed as did another 16 cars located about three-quarters of the way back on the train. The cars that derailed closer to the back of the train were the 73rd to 66th cars and were carrying propane, crude oil and other dry goods.

Mr. Holbrook said there are marshalling rules governing which types of dangerous goods can be close to each other on a train and whether buffer cars are required between certain commodities. He said he could not comment immediately on whether the rules were followed in this case. "That's certainly something the investigation team will be looking at," Mr. Holbrook said.

Federal Transportation Minister Lisa Raitt was also being briefed Wednesday about the incident.

"What I will be asking officials is whether CN is following the emergency response action plan," she told The Globe. "While this situation continues first responders manage the situation in real time and the appropriate agency will eventually investigate what caused the derailment."

Ms. Raitt issued a directive last fall requiring railways to pro-actively inform municipalities about what kinds of dangerous goods they were carting through their communities. Mr. Feeny said it was too soon for those regulations to have come into effect, but he added that CN had already been giving communities information about dangerous goods when local officials asked for it. He said he was not aware if Plaster Rock had requested the information in the past.

Volunteer firefighters in the village, not far from the Quebec boundary, were faced with a huge fireball and an ominous plume of dark black smoke as they responded to a train derailment Tuesday night.

Darren Bourgoyne, a volunteer firefighter, was one of the first on the scene. He told The Globe Wednesday that there was no explosion but a massive fire and the cloud of smoke.

He and his colleagues did not know what they were dealing with when they first got the call of a possible derailment just around 7 p.m.

"What the scary part for me was the huge plume of black smoke that was blowing right towards, it looked like towards the village but it was more or less bypassing us … and of course our fear was we didn't know if it was toxic or not," he said.

There were also concerns about an explosion so they immediately evacuated the nearby residents and stopped traffic.

"Our next action was finding out what was burning … was it toxic?" he said. It was determined it was not but there was danger of propane being too close to the fire and exploding

They created a two kilometre radius around the train - "I guess the only thing we could do then was to stand back in the safety zone until it burned down," he said.

At a press conference Wednesday morning, the head of CN Claude Mongeau apologized to the residents, who have been evacuated. They are still not back in their homes and they were warned by health officials not to drink the water.

Environment officials said that they did not believe there would be any ill effects from the fire and smoke.

The site of the derailment is now full of heavy equipment, including excavators, bulldozers and trucks, to help with cleanup efforts. A helicopter is surveying the scene, and measuring the heat of the cars as there are still concerns about explosions.

But Mr. Burgoyne said the cars have cooled off. "The danger looks like it has passed," he said.

He said the response from officials was quick, with CN and other emergency crews coming from nearby Edmunston and Montreal.

Mr. Burgoyne also noted that members of the community came together to help. At 2 a.m., he said, residents were bringing coffee, doughnuts and sandwiches to the RCMP, ambulance and fire crews. 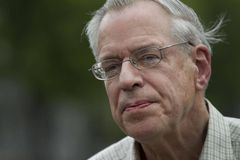 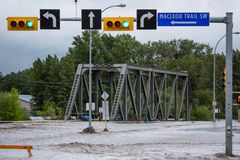 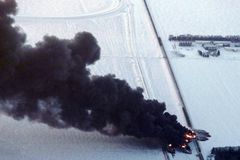 Follow Jane Taber and Kim Mackrael on Twitter @janetaber1 @kimmackrael
Report an error Editorial code of conduct
Due to technical reasons, we have temporarily removed commenting from our articles. We hope to have this fixed soon. Thank you for your patience. If you are looking to give feedback on our new site, please send it along to feedback@globeandmail.com. If you want to write a letter to the editor, please forward to letters@globeandmail.com.
Comments