As Nicole Williamson walked away from the fiery rubble of the plane that crashed into an Arctic hillside, she heard someone crying.

The woman found seven-year-old Gabrielle Pelky sitting on a rock with a broken leg.

"She scooped her up in her arms and got to a better place … moved her to a place where she felt she was safer," said RCMP Sgt. Paul Solomon.

"It's amazing they survived such a thing."

Another man also survived the crash that killed 12 people near Resolute Bay on Saturday, but Sgt. Solomon couldn't say where rescuers found him.

The heroic story emerged Monday as investigators combed through wreckage of the First Air 737 that went down while landing at the Resolute airport.

It was a chartered flight, number 6560, travelling from Yellowknife, part of a regular trip every three weeks for a local hotel to bring up food and passengers.

No cause for the crash has been determined, but witnesses have said there was fog and a low cloud ceiling at the time. It lifted about 10 minutes later.

Soldiers from nearby military exercises rushed to the scene in a desperate effort to find survivors. Witnesses described how airplane parts were strewn across the hill near the airport runway.

Eight Transportation Safety Board employees were already in Resolute, scheduled to participate in the military exercise. One of the scenarios planned next week was a mock plane crash.

All four of the plane's crew, including pilot Blair Rutherford of Leduc, Alta., and co-pilot David Hare of Yellowknife, are among the dead.

Mr. Hare's sister, Julie Garner, said he leaves behind a wife and three daughters – the youngest just one month old. "Flying was his passion and he took it very, very seriously," she said.

Morgan Cox said he feels both lucky to be alive and heartbroken to have lost loved ones on the ill-fated flight.

The mechanic for a hotel in Resolute was supposed to be on the jet. But he was on holiday visiting his family in Fortune, N.L., and decided at the last minute to take a later flight so he could be at his son's 12th birthday party.

He choked back tears on the phone as he talked about never again seeing his best friend Mike Rideout, an electrician at the South Camp Inn who cracked him up with jokes, and six-year-old Cheyenne Eckalook, a granddaughter of the hotel's owner who affectionately called him Bubbles and sat on his lap to eat off his lunch plate.

"I just got to put it behind me and go to work," Mr. Cox said, adding in a few weeks he'll have to muster up the nerve to board another plane.

He has no choice. He needs the paycheque, he said. Besides, he's done it before.

Mr. Cox, Mr. Rideout and another worker who died in the weekend crash, Chesley Tibbo, were all on board another Arctic flight that crash-landed in 2008 in the Cambridge Bay. All on board survived, but Cox had to take pills to calm his nerves on subsequent flights.

Safety board officials have recovered black boxes from the wreckage and taken them to their Ottawa lab for processing. The boxes contain conversations from the cockpit and technical flight data.

"We won't know what they will tell us and they won't tell us until we get access to them," said Mark Clitsome, director of investigations (air) for the Transportation Safety Board.

But it will be several days before they'll be able to analyze the information and the final report on the crash could take more than a year.

Investigators said they'll also be speaking to the three people who survived the crash when they get clearance from their doctors.

In addition to the recorders, investigators will review the plane's maintenance records, weather conditions and interviews with witnesses to the crash and airport staff.

Representatives from Boeing and Pratt Whitney, which manufactured the plane and its engine, are also involved.

RCMP have released the plane's passenger list, but forensic officers and Nunavut's chief coroner are still trying to officially identify the dead.

Remains are to be sent to a temporary morgue in Resolute Bay before they're flown to Ottawa for autopsies.

RCMP Supt. Howard Eaton said only then would the crash site be handed over to safety investigators.

"When people are involved in a crash of this magnitude you have to remember they are hitting the ground at 120, 140, miles per hour. So they may not be readily identifiable," he said from Iqaluit.

Supt. Eaton said RCMP were getting plenty of information from people who were in the area around the time of the crash.

He said initial reports on the weather conditions in the area Saturday were of intermittent fog.

"What I heard was the weather was actually up and down. What a pilot called spotty," Supt. Eaton said.

"One of our pilots was in there later on in the day. Which is kind of typical in the Arctic – you get fog patches rolling in and out."

Transportation Safety board documents released Monday revealed that another First Air jet had to make an emergency landing in the North about two hours after the Resolute Bay crash.

The documents show a First Air 737-200 – the same model that crashed – landed safely in Rankin Inlet, Nunavut, on Saturday, after one engine had to be shutdown after takeoff.

Resolute is on Cornwallis Island and is one of Canada's most northern communities. Rankin Inlet is on Hudson Bay west of Southampton Island.

First Air officials could not be reached for comment Monday. 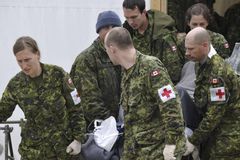 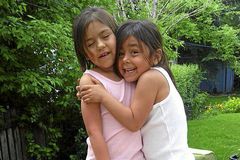 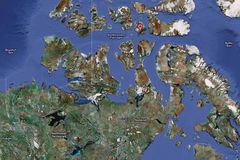 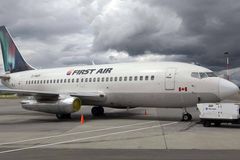 PM brings soft power and firepower to bear in the North
August 21, 2011 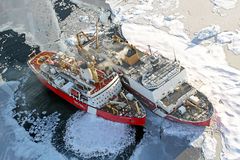