The National War Memorial has been rededicated to honour veterans of the War in Afghanistan at a sombre ceremony held in front of dignitaries and thousands of onlookers nearly three weeks after a soldier was slain at the cenotaph.

The grim fate of Corporal Nathan Cirillo was top of mind for some during Remembrance Day proceedings in Ottawa on Tuesday, a rededication of the 75-year-old War Memorial that drew Princess Anne, Governor-General David Johnston, Prime Minister Stephen Harper and others.

"This sacred space where we gather has been violated, and yet it remains a sacred space – perhaps even more so," Rabbi Reuven Bulka, one of the speakers, said during the ceremony.

"We are shaken to the core, but shaken toward firm resolve. If anything, we are shaken from apathy toward actively promoting our sacred values," he added.

Onlookers packed the streets around the War Memorial for the ceremony – the Legion estimated 50,000 people came, roughly double the usual crowd. "I'm quite impressed," George Squance, a 94-year-old veteran, said while scanning the crowd. "You look across here, and you see a forest of people's heads."

Tuesday's ceremony added the dates of the Afghanistan conflict and Boer War on the memorial, as well as a new message, "In Service to Canada." This year also marked the end of the Afghan mission and the centennial of the start of the First World War.

Helen Mills, a 92-year-old veteran who served with the Royal Canadian Air Force service police in the Second World War, applauded the decision to add the Afghan and Boer war years to the memorial. "I think that's a very good idea. You should be acknowledged. When you go to war, you're a soldier," she said.

The ceremony hit a snag when the sound system cut out – leaving the master of ceremonies, for instance, without a microphone as he announced the arrival of Princess Anne. It was later repaired.

Princess Anne's grandfather, King George VI, attended the memorial's official opening in 1939. She spoke briefly and laid a wreath at the cenotaph.

"We have had sombre occasion in past weeks to ponder our identity as the very symbols of our peace and freedom were violated," he said. "And now here we stand, and here we shall remain, unshaken in resolve, grateful in remembrance of those who have sacrificed, rededicated, like this memorial, to our eternal duty – peace and freedom, the very soul of our nation."

Retired Colonel Mike Whitty, who served in the armed forces for 35 years, said the recent deaths hit home for many Canadians. "These events have made us able to put a face, in a way, to the unknown soldier. The unknown soldier is now known, with Corporal Cirillo and Warrant Officer Vincent," he said.

The number of police officers on hand was "almost double" the amount normally on duty for the ceremony, Ottawa Police Staff Sergeant Lynne Turnbull estimated. Security officials were seen on nearby rooftops and the public was kept across the street from the memorial itself, with police lining the street in between.

Among the crowd was Chuck Smith, 55, who wore an Ottawa Senators hockey jersey with "Cirillo" on the back atop the number 24, the soldier's age when he was killed. "It's just my little way of showing respect," said Mr. Smith, who arrived two hours before the ceremony to secure a spot along the fence.

"I just kind of hope it helps people to remember," he said.

With reports from Kim Mackrael and Kathryn Blaze Carlson

Opinion
With age, I now appreciate war’s awful waste of our young
November 11, 2014 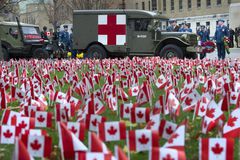 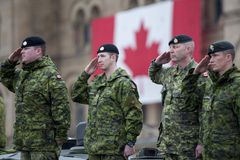 Remembrance Day: A century of loss to remember
November 10, 2014 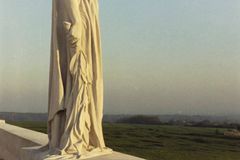 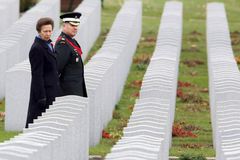 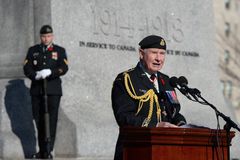