Canada turns 145 tomorrow with its sights firmly fixed on the future, but what would Sir John A. Macdonald make of the nation he helped to create? With biographer Richard Gwyn channelling the Grand Old Man, Toronto writer Johnny Lucas finds out:

This year, Canada Day follows on the heels of the first anniversary of majority rule for our 22nd Prime Minister – a year in which Stephen Harper has reduced federal spending while expanding his horizons, in pursuit of freer trade with other parts of the world. Meanwhile, his omnibus approach to introducing legislation suggests that substantial change may be in the air. So it seems a good time to seek some political perspective – and who better to comment on Canada led by a Conservative of conviction than the nation's first such standard-bearer?

Bear in mind, however, that Mr. Harper and his western-rooted brand of free-trading fiscal conservatism are a far cry from Sir John A. Macdonald and his penchant for having government play a role in the nation's economy, not to mention his National Policy declaration that unfettered international trade would be the death of that economy.

According to historical record, Sir John A. died 14 years before Mr. Harper's Alberta even became a province, but that doesn't mean he stopped paying attention to the country he helped to bring into being. Here, biographer Richard Gwyn channels the Grand Old Man.

How do you feel about the Canada you see today?

I was bound and determined, as you know, that it wouldn't happen and luckily a lot of Canadians felt the same way.

You were a consistent opponent of free trade. Is free trade still a danger to Canada? Is there a risk of cultural assimilation?

But I came to realize that, if you're going to create a community, you have to give people a reason to talk to each other.

One of my purposes with the National Policy was to create a community in which people interacted with each other. And you know who was doing this at exactly the same time? Otto von Bismarck in Germany. He raised tariffs, went protectionist and caused Germans, who weren't all Germans historically – they all had their own little statelets and so on. That was the reason for the National Policy, to create a community behind a wall.

We were in a unique position in the world of being next door to this incredibly efficient, expansionist economy. The United States really began to move as an economy in the 1860s after the Civil War. By the end of the century, they were the world's leading manufacturer, but we were too small, we were too fragile.

I fought free trade with almost literally my dying breath. If we were to have free trade, then we would have disappeared; it's almost a certainty. Canadians would have been better off, but they'd no longer be Canadians.

If you were to celebrate Canada this year with us, how would you do it?

I, of course, wouldn't celebrate Canada Day. I would celebrate Dominion Day.

We've got things to brag about, so we shouldn't be ashamed of pointing out things when doing them very well. And I think that's how we could use Dominion Day to do that.

Canada at the moment is already on its way or already is the most multicultured society in the world. And while there are some stresses and strains, it's going pretty well. You look at similar countries in Europe, I don't want to point fingers at a particular country, but there are some that are having real problems.

And the story of how we became a multicultural country has not been told. It's assumed that miraculously we all became liberal and high-minded and progressive – it's not so. The seeds had to have been in the Canadian character way, way, way back.

I'll give you an example. We've talked about aboriginal affairs being our great failure, which it obviously is. I'm really saddened that it hasn't done very well, to put it gently. But in my century, the 19th century, you see something rather remarkable about Canadian policy. Two things:

My sense is that no Canadians know this – they're never told it.

Are there areas in which you're disappointed with some courses Canada has taken or what we've become?

One great failure, of course, has been the treatment of aboriginal Canadians, but I also notice the enormous number of Canadians, old Canadians, living alone in apartments or nursing homes, or whatever it is.

In my day, all old Canadians lived with their children. We didn't break up the family. We didn't warehouse our the old.

On a more personal note, tell me about your drinking.

I drank a lot. My father drank a lot. In fact, most Canadians drank. In those days, either you got drunk, or you were Temperance. There was no in-between.

Today, as far as I can observe, most Canadians are social drinkers. They go home and have a couple. That wasn't the case with us. We got drunk. That's why you drank. To escape.

Not many Canadians know this: I stopped for roughly the last 15 years of my life, didn't drink. Well, I learned how to drink socially. I'd have the occasional glass of wine.

In 1885, you were proposing votes for women. Were you serious?

I understand that people think I was doing it for politics, but I meant what I said. I looked ahead and I could see no commonsensical reason why a woman and a man should both not have the right to vote.

Even my own Conservatives wouldn't vote for it. And Quebec members were totally opposed. Also, by the way, a whole lot of women felt that way too, including my wife. She thought it would coarsen women, and that's what many people thought. And you know, polling places were not nice places like they are today. There was a lot of drinking, a lot of fighting, a lot of swearing. So they had a point.

I would have lost a lot of votes. So people who say I proposed the vote for women for politics – that's simply untrue. I do know politics, and I know what would have happened.

I was the first prime minister in the world to introduce legislation to extend the vote to women. One of the ablest political observers at the time, John Willison, editor of The Globe (I think it's now called The Globe and Mail), wrote that women adored Sir John A. Macdonald – they liked me. Women's judgment can be much better than that of men, about personality.

I treated people with great respect and they knew it. People were not afraid of me. They thought of me as one of them.

I think in that sense the politician after me who was most like me was Jean Chrétien. It was said of Chrétien that he could go to any backyard barbecue in the country, unannounced, and people would be completely at ease with him. I did the same thing. We didn't have barbecues then; we had a lot of picnics.

You must be happy that Canada has survived.

Of course, I am, but I don't go around saying how clever I was. I just think that things went the way they should have gone.

Johnny Lucas is a Toronto writer and Richard Gwyn is an award-winning journalist and author of the two-volume biography Sir John A. – The Man Who Made Us and Nation Maker. 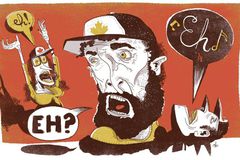 You said it: Your Canadian moments
June 19, 2017
What kind of Canadian are you? Take our (unscientific) Canada Day quiz
June 19, 2017
Follow us on Twitter @globeandmail Opens in a new window
Report an error Editorial code of conduct
Due to technical reasons, we have temporarily removed commenting from our articles. We hope to have this fixed soon. Thank you for your patience. If you are looking to give feedback on our new site, please send it along to feedback@globeandmail.com. If you want to write a letter to the editor, please forward to letters@globeandmail.com.
Comments