An anonymous online threat against Wilfrid Laurier University in Waterloo, Ont., triggered a campus-wide lockdown that lasted most of Friday morning, raising questions about how universities can respond to vague security risks without causing panic.

The threat was first spotted by the U.S. Federal Bureau of Investigation and then passed on to the university.

Waterloo Regional Police said the language used in the threat, which was posted on the social-media site 4chan.org, echoed a similar threat made against an Oregon college before it became the scene of a mass shooting earlier this month that left 10 people dead, including the shooter.

The campus-wide lockdown went into effect at 6 a.m. ET and was lifted at 11:30 a.m. once police and university officials concluded there was no threat. Few students were on campus because the school was on reading week.

The sudden shutdown of an entire university campus puts the spotlight on how Canadian postsecondary institutions can best respond to anonymous online threats. Last month, the University of Toronto kept the campus open after receiving an anonymous threat on a local lifestyle website.

At a news conference, Laurier president Dr. Max Blouw defended his university's decision to order a lockdown, saying the safety of staff and students was paramount.

Waterloo Regional Police backed up the choice. "The university had to make a decision early in the morning and we did not have enough information to make them comfortable to open the campus," Superintendent Pat Dietrich said

Universities across North America have been targeted by posters to 4chan.org this month, causing widespread concern on their campuses. The type of post that was made about Laurier has been repeated frequently on the site, with different possible targets. On Tuesday, a similar post appeared about Monash University in Melbourne.

The 4chan.org site is a niche part of the Internet, compared with the broader demographic on social-media sites, such as Facebook, according to Aimée Morrison, who researches online communities and is an associate professor in English at the University of Waterloo.

"It's ugly and not user friendly. It's the Internet from 1995 resurrected and it's meant to appeal to a core set of users – technically sophisticated pranksters," Prof. Morrison said.

"I'm sure if you find whoever it is that posted this today he – and I guarantee you it's a dude – is going to be extremely pleased with himself for causing this cultural chaos," she added.

But Jenna Jacobson, a social-media researcher and PhD candidate at University of Toronto, questions the idea that social media is the culprit in bad online behaviour.

"Historically, people have used letter or phone calls to make threats. So social media is just the tool that people are using to communicate these threats. The major difference is that threats made on social media are very public – everyone can see it …," she said.

Anatoliy Gruzd, director of the Social Media Lab at Ryerson University, believes that Internet freedom should be protected and he warns against trying to police or block sites such as 4chan.org. Anonymous profiles can be valuable in societies where there is virtually no freedom of speech offline by providing a way for people to express themselves freely online, he said.

He also believes niche social-media sites can be self-regulating. "In many cases the community itself will resolve and police itself," said Dr. Gruzd.

Waterloo's police, however, said they are now working closely with the RCMP in a complex investigation tracking IP addresses. Early information indicated the poster lives outside of Canada, they added.

Laurier had been planning for a lockdown for the past several years, according to staff.

"We have had strong emergency response plans including police swat team training drills on campus during summer over past years," said Peter Baxter, the university's athletic director.

"One would hope this helps and is pro-active but, as in sport, there is always a risk. You can plan, prepare, but stuff happens. The good part is we stuck to plan and did not ignore the threat. Better careful than sorry," he added.

With reports from Allan Maki and Bertrand Marotte 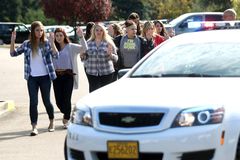 Fredericton school lockdowns prompted by man with umbrella
October 16, 2015
Follow Affan Chowdhry and Simona Chiose on Twitter @affanchowdhry @srchiose
Report an error Editorial code of conduct
Due to technical reasons, we have temporarily removed commenting from our articles. We hope to have this fixed soon. Thank you for your patience. If you are looking to give feedback on our new site, please send it along to feedback@globeandmail.com. If you want to write a letter to the editor, please forward to letters@globeandmail.com.
Comments