Glenn Thibeault wanted an uncontested nomination and campaign jobs for two of his constituency staff if he was to step down as a New Democratic MP and run for the Ontario Liberals in a 2015 provincial by-election in Sudbury, a court has heard.

Two former Liberal organizers for Premier Kathleen Wynne are accused of bribery under Ontario's Election Act in connection with the by-election, which Mr. Thibeault won. The trial started on Thursday in Sudbury before Justice Howard Borenstein of the Ontario Court of Justice and is scheduled to continue until the end of October.

The Liberals face a general election next June and the trial raises ethical questions about the long-governing party, which is already trailing in most polls, and Ms. Wynne, whose popularity level has fallen to nearly historic lows. An unrelated second trial is set to start in Toronto next week on charges that stem from the cancellation of gas plants under Ms. Wynne's Liberal predecessor.

In the Sudbury trial, Ms. Wynne's former campaign director, Patricia Sorbara, faces two charges, while Gerry Lougheed Jr., a power broker for the Liberals in the city, faces one. Both denied any wrongdoing in court on Thursday morning.

The two are accused of offering former Liberal candidate Andrew Olivier an appointment or job with the provincial Liberals to drop out of the nomination race and open the way for Mr. Thibeault. Crown attorney David McKercher said the former NDP MP was Ms. Wynne's preferred candidate.

After calls from Ms. Sorbara, Mr. Lougheed and Ms. Wynne had failed to persuade Mr. Olivier, the Liberal Leader appointed Mr. Thibeault as the party's candidate. He is now Energy Minister.

In his opening statement on Thursday, Mr. McKercher said Mr. Thibeault wanted a well-supported campaign, money from the party to replace his lost federal income and paid positions on the by-election campaign for two of his constituency office staff.

"The Premier was determined to win this seat back in the by-election," Mr. McKercher said. "She wanted a winning candidate and didn't think Andrew Olivier offered the best chance of winning."

According to Mr. McKercher, her choice was Mr. Thibeault. The sitting MP wanted the Liberal Party's financial backing before risking the exit from his federal position because of his concern that voters would punish him for switching parties. Mr. Thibeault is expected to testify later in September.

Only a dozen members of the public were in the audience on Thursday as the highly anticipated political trail started. Seated in front of the judge in the small courtroom were nine people: six lawyers, a police detective and the two accused. While the case is in provincial court, the prosecutors were recruited from the federal prosecution service to avoid any appearance of bias.

The prosecution's plan to call 17 witnesses, including Ms. Wynne, who is expected to testify on the morning of Sept. 13, will put the Ontario Liberal Party in the spotlight for the next two months. Other witnesses include top party officials, local strategists and former Liberal MPPs.

Mr. Olivier, who ran for the Liberals in the 2014 general election and finished second, testified from the witness box on Thursday, and often sat silently listening to recordings he made of conversations with Ms. Sorbara and Mr. Lougheed in late 2014. Mr. Olivier is paraplegic and makes recordings because he cannot take notes. According to the Crown, the recordings contained offers of inducement not to seek the party's nomination in the by-election. He also spoke with Ms. Wynne, although that phone call was not recorded.

On Thursday morning, Mr. Lougheed's lawyer, Michael Lacy, revealed that a third recording, between Mr. Olivier and Ms. Sorbara, has been discovered and presented it to the court. He explained that part of that conversation forms one of the main points of the defence's strategy, which is to argue that Mr. Olivier was not a candidate as defined by the Election Act, but rather a person seeking a nomination to be a candidate and, therefore, the act is not applicable to his case.

"You're the past candidate, not the current candidate, yet," Ms. Sorbara, who was then the party's campaign director, said in the Nov. 23, 2014, phone call. "I'm in your hands, Pat," he answered.

During a cross-examination on Thursday afternoon, Mr. Lacy asked Mr. Olivier when he became the party's candidate for the 2015 by-election. When he hesitated in his reply, the defence lawyer cut him off. "Never. You were never the Liberal candidate," Mr. Lacy told him.

Ms. Wynne has said she had already decided Mr. Olivier would not be the party's candidate by the time he spoke with senior party officials. She described the conversations as not an intention to promise Mr. Olivier a job, but to keep him in the party.

When the Election Act charges were laid last November after an investigation by the Ontario Provincial Police, Ms. Sorbara had recently taken a leave of absence as the Premier's deputy chief of staff to become the Ontario Liberal Party chief executive and 2018 campaign director. She stepped down from all three positions after being charged.

A conviction under the Election Act carries a penalty of up to $5,000 for bribery. The penalty can increase to a fine of $25,000 and up to two years less a day in jail if a judge finds the act was done knowingly. 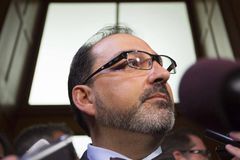 Liberals paid Thibeault to run in Sudbury by-election, document shows
November 3, 2016
Follow Justin Giovannetti on Twitter @justincgio
Report an error Editorial code of conduct
Due to technical reasons, we have temporarily removed commenting from our articles. We hope to have this fixed soon. Thank you for your patience. If you are looking to give feedback on our new site, please send it along to feedback@globeandmail.com. If you want to write a letter to the editor, please forward to letters@globeandmail.com.
Comments