Ontario's Liberal government is trying to stay as far away as possible from the chaos enveloping Toronto Mayor Rob Ford, but the province has not closed the door entirely on intervening at some point.

While current laws do not allow the province or city council to force Mr. Ford, who admitted on Tuesday to smoking crack cocaine, to step aside or resign, the legislature could amend the City of Toronto Act to allow sanctions against the mayor.

Premier Kathleen Wynne has been briefed on the relevant laws, one government source said. Another suggested the province would take its cues from city council.

Councillors have floated several ideas, including stripping Mr. Ford of specific powers or his office budget. It is not yet clear if they will ask the province to give them more authority to deal with the mayor.

For now, the plan is not to get involved.

Liberal insiders cited several reasons for this approach. Mr. Ford's popularity has remained strong after previous revelations, and the government is wary of upsetting his base by punishing him.

And having Mr. Ford in office does, in some ways, benefit the Liberals: one MPP acknowledged that the party appreciates the awkward position in which the scandal-prone mayor places the opposition Progressive Conservatives, the party with whom he is most closely identified and aligned.

"I think the sense of our caucus is that Rob Ford is the gift that keeps on giving to us," said the MPP, who spoke on condition of anonymity. "The strategy is just to stay out of this."

The Premier did, however, express concern shortly after Mr. Ford's admission.

"What's happening at city hall makes it very difficult for the business of city hall to carry on in a normal way and that's my biggest concern as a citizen of this city and as the Premier," she said. "We want municipalities to be able to function and there is a huge amount of turmoil at city hall right now, and that's what's of concern."

At a caucus meeting on Tuesday afternoon, the Liberals did not discuss possible changes to the City of Toronto Act, or how they would respond to requests from council for them. Instead, sources said, Ms. Wynne delivered a message similar to the one she has offered publicly: expressing concern about the well-being of the mayor and the impact of his troubles on the city.

An official for Municipal Affairs Minister Linda Jeffrey said that changing the City of Toronto Act is not an option the government has yet considered. The official noted such a move would require time both to write the legislation and to try to get it passed. And the minority government would require help from at least one other party to do so.

He did, however, suggest that the mayor's brother, Councillor Doug Ford, would still be welcome to run for the Tories in the next election.

"We'll see when the election happens and what Doug's intentions are," Mr. Hudak said as he left Question Period. "I've got nothing to say about the goings-on at city hall."

New Democrat Leader Andrea Horwath said the province should not get involved in the situation. 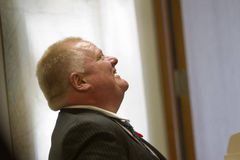 Late-night talk shows poke fun at the Rob Ford scandal
November 5, 2013
Follow Adrian Morrow and Adam Radwanski on Twitter @adrianmorrow @aradwanski
Report an error Editorial code of conduct
Due to technical reasons, we have temporarily removed commenting from our articles. We hope to have this fixed soon. Thank you for your patience. If you are looking to give feedback on our new site, please send it along to feedback@globeandmail.com. If you want to write a letter to the editor, please forward to letters@globeandmail.com.
Comments are closed