The monster, an eight-foot-tall assemblage of exhumed body parts, lies motionless on an operating table. Swathed and scary, it is raised to the roof of the dank laboratory, amidst a raging thunderstorm, and when it is again lowered to the floor, its hand begins to stir.

The scientist looks less delighted later in the 1931 movie, when the monster has turned murderous and his creator has joined the torch-wielding mobs and baying hounds in furious pursuit. This cannot end well.

And now you know what it feels like to be the Republican Party in the age of Donald Trump. For the electoral monster of the moment, rampaging across the American political landscape, is a creature of the Grand Old Party's own making. And it would be hilarious, if it weren't so sad and serious, watching petrified Republican poobahs scramble to stop the marauding Donald – the mobs-and-hounds phase.

Mr. Trump is "unhinged" (candidate Jeb Bush), he "has taken xenophobia and religious bigotry to a new level" (former candidate Lindsey Graham) – this after Trump called for a complete ban on Muslims entering the United States. The proposal, opined Republican House Speaker Paul Ryan, "is not what this party stands for, and more importantly it's not what this country stands for."

Sorry, boys, but you own this one.

Yes, as many dispassionate analysts have noted, Mr. Trump's rants against Mexicans ("criminals," "rapists," build a wall) and especially Muslims (cards, databases, the travel ban) mirror the far-right firebrands of Europe, with their single-issue assault on racial and religious minorities. But is Mr. Trump merely the American incarnation of this toxic trend?

Not merely, no. Hell no. Republicans don't need to imitate foreigners; they can whip up a whirlwind of fear and divisiveness all by themselves – well, with a little help now from Fox News and right-wing radio. It's race-based politics, made in the U.S.A.

Go back to the 1960s. The civil-rights marches and sit-ins to end racial segregation in the South culminated in legislation passed under a Democratic president, producing an inevitable backlash. Sure, Lyndon Johnson thumped Barry Goldwater in the 1964 election, but the Republican candidate, championing "states' rights," captured five Southern states that traditionally went Democratic. Republicans saw the light.

Four years later, Richard Nixon doubled down on what came to be called the Southern Strategy, combining states' rights with "law and order," which not only ennobled Southern resistance to black unrest and advances, but had the added benefit of demonizing the long-haired kids protesting the Vietnam War.

And more recently there were the "birthers," a motley crew of conspiracy theorists claiming that Barack Obama was born not in Hawaii but in Kenya, which would disqualify him from being president of the United States. Mr. Obama released his birth certificate, but never mind – racial politics, it seems, is more about feelings than facts. Among the most prominent birthers: Donald Trump.

So why are Republican bigwigs so rattled by Mr. Trump now?

Because he's given away the game. He's tossed aside the dog whistle and struck up a band, trumpeting xenophobia as if it were the American Way. He's not playing by the rules, and besides he's not one of them – not a Jeb Bush or even a Marco Rubio, who've paid their political dues and are at least housebroken. He's a mega-rich developer who became a reality-TV star and is now spinning celebrity, bigotry and blunt certitude into a third act – Oval Office, here we come.

What brought this political creature to life? No single bolt of lightning, more a season of opportunity: the conservative base pouring scorn on Republican leaders for perceived sellouts over everything from immigration to Obamacare. But Trump as front-runner? Really? It's as if the presidency itself has been devalued, and neither party escapes blame there.

Democrat Bill Clinton, after all, didn't exactly raise the dignity of the office by getting serviced at work. And the Republicans served up George W. Bush, a smirking lightweight who too often ceded his presidency to the VP behind the curtain, grim Dick Cheney. Then John McCain, a supposedly serious candidate, gave the heartbeat-away place to one Sarah Palin – a confirmed know-nothing who has since moved on to right-wing commentary and reality TV. The Alaskan was a pioneer of the insubstantial. She lowered the bar, paved the way for Mr. Trump.

So here we are in early January, with the threat of terror in the air and "Islamic State" so pervasive it might as well be playing in a football bowl game. The American primaries are approaching and Republican honchos are quaking – not because of terror but because of Mr. Trump. He's alive, he's moving and he's not going away, crashing through barriers of decorum and racial delicacy and imperiling the Republican brand.

In the movie, the mob eventually surrounds an old windmill, the hounds in a frenzy, the monster and his maker inside. There's a scuffle and Henry Frankenstein falls out. "Burn the mill," someone shouts. They do, the monster trapped and screaming.

Relax, it's just a metaphor. The Donald will go on – even if not to the White House, blustering all the way. The GOP? Good luck putting the fire out.

Bob Levin is a features editor at The Globe and Mail. 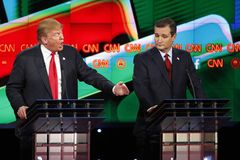