Ethics Commissioner Mary Dawson has decided to question Prime Minister Justin Trudeau formally to determine whether he breached the Conflict of Interest Act when he attended Liberal Party cash-for-access fundraisers with corporate executives wanting favours from the federal government.

Ms. Dawson, who has for weeks ruled out taking action, will also quiz Liberal MP Bill Blair – who is in charge of legalizing recreational marijuana – about a fundraiser he headlined that was attended by a lobby group pushing for laws that would allow small businesses to sell pot legally to recreational users.

Once Ms. Dawson has completed the interviews, she will decide whether a full-scale investigation is required into Liberal Party fundraisers, at which people pay up to $1,500 for exclusive access to Mr. Trudeau or cabinet ministers in the homes of wealthy Canadians.

This is the first time in a decade Parliament's independent ethical watchdog has asked a sitting prime minister to defend his integrity. In 2006, ethics commissioner Bernard Shapiro interviewed prime minister Stephen Harper about possible inducements to get Liberal MP David Emerson to cross the floor to sit in the Conservative cabinet.

"While the information provided in support of the allegations is not sufficient to cause me to initiate an examination under the [Conflict of Interest] Act, your letter and media articles leave me with concerns in relation to Mr. Trudeau's interactions with individuals involved with the canola export agreement, Wealth One Bank, and Anbang Insurance Group," Ms. Dawson wrote. "Consequently, I will follow up with Mr. Trudeau regarding his involvement with the fundraising events and with the three above-noted matters."

In a separate letter to New Democrat MP Alexandre Boulerice, who also wrote a letter of complaint, Ms. Dawson said she will question the Prime Minister about his discussions with B.C. multimillionaire Miaofei Pan, who hosted Mr. Trudeau and 80 guests at a $1,500-a-ticket event at his West Vancouver home.

In an interview with The Globe and Mail, Mr. Pan said he urged the Prime Minister to allow Chinese investment in seniors' care and real estate development, and to ease rules for immigrant investors. This took place as the Trudeau government is reviewing a $1-billion bid by China's Anbang Insurance Group to buy one of British Columbia's biggest retirement home-nursing care chains.

"I will follow up with Mr. Trudeau in connection with his fundraising activity of November 7, 2016 and about any communication with Anbang Insurance Group or Mr. Pan following this event," she wrote to Mr. Boulerice.

Ms. Dawson said she will also focus on what Mr. Trudeau discussed at a $1,500-a-ticket fundraiser at the Toronto home of Chinese Business Chamber of Canada chair Benson Wong on May 19. One of the donors was insurance tycoon Shenglin Xian, the principal investor in Wealth One Bank, which was awaiting final federal approval at the time.

Another donor was Thomas Liu, whose canola oil export business might have been harmed from China's decision to restrict the country's imports of Canadian canola seed. On a trip to China in September, Mr. Trudeau persuaded China's leaders to lift the restrictions.

Ms. Dawson rejected opposition demands to look into a large donation Chinese billionaire Zhang Bin made to the Pierre Elliott Trudeau Foundation. Weeks after he attended the May 19 fundraiser, Mr. Zhang and a business partner gave $200,000 to the Trudeau Foundation and $50,000 to build a statue of the former prime minister.

She said she could find no evidence Mr. Zhang, who is a Communist Party official at a state-supervised organization that works to project China's power abroad, "has dealings or is seeking funding from the Government of Canada."

The opposition parties have called the donation a "backchannel" payment to gain influence with Mr. Trudeau's government, but Ms. Dawson says she accepts the Prime Minister's word that his involvement with his late father's foundation ended when he became Liberal Party Leader in 2013.

The Liberal Party recently returned donations to representatives of the Cannabis Friendly Business Association after The Globe reported its representatives lobbied Mr. Blair, a former Toronto police chief, at a party fundraiser.

"I also have concerns in relation to Mr. Blair's interactions with individuals involved with the Cannabis Friendly Business Association and will follow up regarding his involvement with the fundraising event held on April 28," she wrote to Ms. Ambrose.

Ms. Dawson has called the cash-for-access system "not very savoury," but her office had repeatedly told The Globe it had no basis to investigate. The Lobbying Commissioner announced last month that she has launched an investigation into the practice after Globe and Mail articles revealed that business executives who have lobbied the government were buying tickets to cozy up to senior ministers.

Of particular focus for Ms. Shepherd was a $500-a-ticket fundraiser in Toronto on Nov. 7 featuring Finance Minister Bill Morneau that Barry Sherman, the chairman of Apotex pharmaceutical giant, was helping organize. Mr. Sherman withdrew from involvement with the event at the home of philanthropist Nancy Pencer after The Globe reported it.

Ms. Dawson cautioned in her letters that the Conflict of Interest Act might preclude an investigation. The act requires evidence that politicians personally showed preferential treatment. She would also need evidence they "personally solicited funds," which is not how the Liberal fundraising system works. Liberals outside of government solicit donations.

"To establish reasonable grounds that Mr. Trudeau or Mr. Blair may have contravened section 16 of the Act, I would need some information indicating that they personally solicited funds and that this would have placed them in a conflict of interest," she wrote.

Ms. Dawson has called on Parliament to adopt tougher fundraising laws that would address selling access for party donations. She said Mr. Trudeau's Open and Accountable Government rules are tougher than the conflict of interest laws and should be transferred to her to enforce.

Mr. Trudeau's own rules say cabinet ministers and parliamentary secretaries must "observe the highest ethical standards in everything you do" and state "there should be no preferential access to government, or appearance of preferential access, accorded to individuals or organizations because they have made financial contributions to politicians and political parties."

But he argued that he uses the fundraisers to tell the well-to-do donors his government's mandate is to tax the rich to reduce taxes for the middle class.

"No matter where I am or who I am talking to," he said on Tuesday, "I always talk about the same thing: The fact that our priorities are to create economic growth for the middle class by increasing taxes for the 1 per cent of the wealthiest so we are able to reduce them for the middle class. We point out that we stopped sending out child benefits to wealthy families so we can do more" for families that need it.

In the Commons on Wednesday, opposition parties heaped ridicule on the new line of defence. "Let us compare the middle class to the Prime Minister's cash-for-access donors," Ms. Ambrose said. "Middle-class folks are concerned with getting their mortgage approved. Billionaires at his cash-for-access events are lobbying to get their bank approved. Middle-class families are anxious about how to pay for their grandma's health care. Billionaires at these cash-for-access events are trying to buy seniors' homes."

NDP chief Thomas Mulcair asked whether the Liberals "really think that exclusive fundraisers with canapés and cocktails are a Christmas gift to the middle class?" 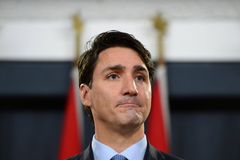