The Harper government has redrawn the list of independent monitors who will oversee a hunt for alternatives to the F-35 Lightning fighter after retired general Charles Bouchard bowed out.

The Conservatives are announcing panelists Wednesday to vet the federal government's new search for a warplane in the face of ballooning cost estimates for the jet Ottawa picked in 2010.

The monitors' task will be to ensure Canada is conducting a rigorous rethink of this procurement and these appointees will be putting their reputations and credibility on the line as a result.

The list was supposed to include retired Lieutenant-General Bouchard, who led the NATO mission in Libya.

But sources on Wednesday said Mr. Bouchard informed the government that he was too busy to take on the task.

The Harper government is going shopping for alternatives to the controversial F-35 in the most significant demonstration yet that it is prepared to walk away from its first choice for a new warplane.

It's releasing new independent cost estimates Wednesday that show the full lifetime cost of the jets will exceed $45-billion.

In an attempt to head off public skepticism that Ottawa's "options analysis" is something less than a rigorous rethink of which jet is best, the government is enlisting four independent monitors to vet the process.

The Conservatives, who have been heavily criticized for selecting the F-35 without due regard for price and availability, are launching this effort to repair their credibility as stewards of public money.

The Conservatives announced in July, 2010, they had decided to buy the F-35 without any competition, and for more than a year and a half, described the jet purchase as a $9-billion acquisition. But in April, 2012, Auditor-General John Ferguson revealed it would cost $25-billion for the first 20 years alone.

The ballooning lifetime cost of the F-35 fighter and Ottawa's decision to shop around for alternatives are creating panic among Canadian companies betting on supply contracts for the Lockheed Martin plane, sources have said.

The government will start this process Wednesday by releasing National Defence's updated cost estimates for buying 65 F-35 fighters, and an independent review by KPMG of the forecast price for keeping the jets flying for their full lifespan. The planes are expected to last 36 years, and they should be 'costed' as such, the Auditor-General suggested in his April report.

Sources say the full price of ownership for the F-35 would add up to more than $45-billion when all costs, including fuel and upgrades, are included – or more than $1-billion a year over the F-35s' lifespan.

This price, however, will not include the cost of extra planes to be bought for spare parts. The Auditor-General suggested in April that Canada would need 14 extra F-35s over 36 years, but sources say Ottawa believes it will more likely require only seven to 10 extra planes.

The government aims to complete this reappraisal of what the fighter aircraft market can offer Canada as expeditiously as possible in 2013. The government is requesting answers to questions, including: what kind of plane does Canada need? How long can Ottawa keep its aging CF-18s keep flying? Which jet makers can meet Canada's budget and requirements in a timely fashion? Do other jets need to be purchased as a stop-gap? Is the best plane still the F-35?

The terms of reference for this options analysis, which will also be released next week, say Ottawa will "review and assess fighter aircraft currently in production and scheduled for production." This will include the F-35.

Government sources say Ottawa has not decided whether to call for competitive bids to supply a plane and will await the results of the options analysis.

Canada has signed no contract to buy F-35s, and while it has signalled to Lockheed Martin, the manufacturer, that it wants 65, it has no obligation to buy them. It did sign a memorandum of understanding in 2006 that set the terms by which a country would buy the aircraft and also enabled domestic companies to compete for supply contracts for the plane.

MacKay under fire over ballooning costs of F-35 program
December 7, 2012 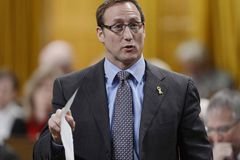