An Algerian man is set to sue the federal government for the abuses he says he suffered at the hands of American security forces after he left Canada 15 years ago.

The unproven allegations by Djamel Ameziane, who was never charged or prosecuted, raise further questions about Canada's complicity in the abuse of detainees at Guantanamo Bay — a topic his lawyer said demands a full-scale public inquiry.

"My current situation is really bad, I am struggling to survive," Ameziane, 50, said from near Algiers. "I was repatriated from Guantanamo and left like almost homeless. I couldn't find a job because of the Guantanamo stigma and my age, so a settlement would be very helpful to me to get my life back together."

In a draft statement of claim obtained by The Canadian Press, Ameziane seeks damages of $50 million on the grounds that Canada's security services co-operated with their U.S. counterparts even though they knew the Americans were abusing him.

"The Crown's conduct constituted acquiescence and tacit consent to the torture inflicted upon the plaintiff," the lawsuit alleges.

Canadian intelligence, the suit alleges, began sharing information with the Americans after failing to pick up on the 1999 "Millennium plot" in which Ahmed Ressam, another Algerian who had been living in Montreal, aimed to blow up the Los Angeles airport. After 9/11, Canadian agents interrogated Ameziane at the infamous American prison in Cuba, as they did Canada's Omar Khadr, according to the claim.

Ameziane's Edmonton-based lawyer, Nate Whitling, said the government's recent out-of-court settlement — worth a reported $10.5 million — with Khadr over violation of his rights has prevented scrutiny of Canada's alleged complicity in abuses at Guantanamo Bay. A judicial inquiry is needed, Whitling said.

"Only then can the Canadian public come to understand the extent to which Canada is responsible for the torture of innocent detainees in the aftermath of 9/11," Whitling said.

The lawyer, who said he planned to file the lawsuit in Court of Queen's Bench in Edmonton on Monday, said Ameziane would be prepared to put the claim on hold in exchange for an inquiry. Whitling also said two other people planned similar suits that name the federal government, RCMP and Canadian Security and Intelligence Service.

Public Safety Minister Ralph Goodale had no comment given the pending legal proceedings.

The U.S. detained Ameziane at Guantanamo Bay for more than 11 years until his release in December 2013.

"For many years, I had the idea of suing the Canadian government but didn't know how and honestly didn't know it was possible until I read the news about the settlement of Omar Khadr, who was my fellow inmate in Guantanamo Bay," Ameziane said. "The action I am taking may also make (Canadian officials) think twice before acting against the interests of Canada and Canada's human values."

According to his claim, Ameziane left Algeria in the 1990s to escape rising violence there. After working as a chef in Austria, he came to Canada in December 1995 and asked for refugee status. He lived in Montreal for five years, attending mosques where the Americans said members of al-Qaida prayed.

When Canada rejected his request for asylum, Ameziane opted to go to Afghanistan rather than Algeria, where he feared abuse. He left Afghanistan for Pakistan in October 2001 when fighting erupted, but was captured and turned over to American forces in exchange for a bounty, his claim states.

The Americans first took him to a detention facility in Kandahar, where he alleges guards brutalized him, then sent him to Guantanamo Bay based partly on information provided by Canadian intelligence, according to his claim.

Ameziane, who denies any terrorism links, says Canadian agents interviewed him in Guantanamo in February and May 2003 and turned over recordings of the interrogations to the Americans. They did so, he claims, despite widespread allegations that U.S. forces were abusing detainees and even though they knew he faced no charges and had no access to a lawyer or the courts.

Ameziane alleged American officials interrogated him hundreds of times and abused him when they decided he wasn't co-operating. The abuse, he alleges, included sleep-deprivation, intrusive genital searches, pepper-spraying, waterboarding, being left in freezing conditions, and having his head slammed against walls and the floor, dislocating his jaw.

"Canadian officials came to interview me on two occasions (and) they not only shared information about me with my American torturers but even tried to get information out of me that had nothing to do with Canada in order to help my American torturers," Ameziane said. "I refused to answer questions, after that I was subjected to a worse treatment by the Americans." 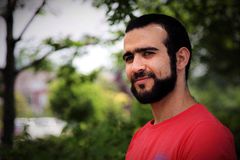 ‘This is a human life’: Ranger medic recalls treating Omar Khadr
July 24, 2017
Report an error
Due to technical reasons, we have temporarily removed commenting from our articles. We hope to have this fixed soon. Thank you for your patience. If you are looking to give feedback on our new site, please send it along to feedback@globeandmail.com. If you want to write a letter to the editor, please forward to letters@globeandmail.com.
Comments are closed