The federal government can expect to pay nearly a billion dollars a year in disaster relief for extreme weather events – far more than the $100-million it has been budgeting – as the increasing frequency and intensity of hurricanes, winter storms and especially floods take a greater toll, the Parliamentary Budget Officer says in a report.

But, as climate change inevitably alters traditional weather patterns, politicians and environmental experts say the most important investments are those that will help Canadians to know in advance where the worst storm damage is likely to occur and to take steps to offset it.

The destruction caused by extreme weather is a "problem that can be, with the right kind of planning, not eliminated but reduced by mitigation policies and programs," Public Safety Minister Ralph Goodale, whose department is in charge of federal disaster assistance, told The Globe and Mail on Thursday.

The Disaster Financial Assistance Arrangements (DFFA) program was created in 1970 and is used by Public Safety Canada to reimburse provinces and individuals for the damage that results from disasters, such as the Toronto area ice storm and the massive flood in southern Alberta and eastern British Columbia that occurred in 2013.

The cost of such an event is shared with the provinces, with the federal contribution increasing until the price tag reaches $15 multiplied by the province's population, after which Ottawa pays 90 per cent.

But the Parliamentary Budget Officer report says that even those numbers are too low.

Using data from the DFFA, the Insurance Bureau of Canada, Swiss Re and Risk Management Solutions Inc., the PBO estimates that the DFAA will have to pay an average of $229-million a year for hurricanes, convective storms and winter storms and an additional $673-million annually for floods. Those two numbers add up to an estimated bill of $902-million annually.

The PBO report says the largest damage from floods is expected to occur in the prairie provinces because so much infrastructure in Manitoba, Saskatchewan and Alberta has been built on floodplains and, unlike in Ontario and Quebec, the management of those floodplains has been left to municipalities, which do not have good data or planning to deal with major natural disasters.

The Insurance Bureau of Canada issued a statement after the release of the PBO report saying it affirmed the bureau's research, "which shows that climate change is a real and present danger costing government, and Canadians, hundreds of millions of dollars every year."

Mr. Goodale said it's clear that significant weather events are big problems that are only going to get bigger, which is why the Liberal government has promised to create a green infrastructure fund of $20-billion over the next 10 years to make communities more resilient. The initial investments from that fund could be announced in the budget that is expected late next month.

Blair Feltmate, head of the Intact Centre on Climate Adaptation at the University of Waterloo, said that from 1983 to 2008, Canadians insurers paid $200-million to $500-million annually for losses resulting from natural catastrophes. But, since 2009, there has never been a year when those claims dipped below $1-billion, and in 2013 the payout was $3.4-billion, he said.

Recognizing that climate change can be slowed by the reduction of greenhouse-gas emissions but not entirely stopped, Dr. Feltmate said: "We have to adapt to the extreme weather that is in the system now and that will be realized even more so going forward."

That must include the production of up-to-date floodplain maps that will indicate where the water from major weather events is going to go, he said. And those maps must look forward "to make sure that we are out of harm's way from the big storms that will occur 25 to 50 years from now," he said.

Deadly storms in U.S., blackouts in Canada: What the winter weather’s like today​
February 25, 2016 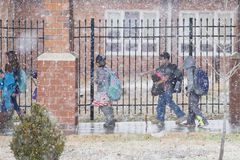 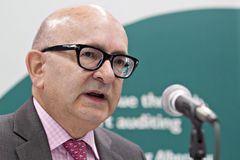