It's not just the leaves that are turning red and orange here along the north shore of Lake Nipissing.

It is also the lawns along the streets of the several communities that make up the Nipissing First Nation – though far more Liberal red than NDP orange. The blue lawn signs of the incumbent member of Parliament, Conservative Jay Aspin, are less common than nuisance bears.

Where one could find lots of Tory blue this week in the Northern Ontario riding of Nipissing-Timiskaming was in the mailboxes: a curious brochure with a smiling Mr. Aspin on one side and a long-frocked Justin Trudeau on the flip side.

Opposite the photograph of the Liberal Leader was a bucolic shot of a father and young son walking in the autumn woods, shotguns by their sides, a couple of ruffed grouse in hand.

Mr. Trudeau, who was elected to Parliament 15 years and four elections after Bill C-68 brought in the long-gun registry, is quoted saying he would vote again to keep it. In capital letters opposite, over the Conservative Party logo, is a capital-letters reminder that the Tories were the ones who "SCRAPPED THE LONG-GUN REGISTRY."

They have long memories in these parts, and Oct. 19 will determine just how fondly, if at all, they remember Anthony Rota, who held this riding for the Liberals through three federal elections, only to lose to Mr. Aspin in 2011 by 14 votes – a razor-thin win for the Conservatives that was stretched to 18 votes in a judicial recount.

Those 18 votes will be easily covered, and far more, by a surprising surge in voting interest found among the indigenous voters of the riding, a riding that has been adjusted, coincidentally, to take in more of the sprawling Nipissing 10 Reserve to the north while dropping a couple of townships that traditionally voted Conservative.

No one, given the recent track record of polls, not to mention the daily fluctuations of this unfocused election campaign, would dare suggest that Mr. Rota, Mr. Aspin or NDP challenger Kathleen Jodouin has a lock on Nipissing-Timiskaming. All three parties believe they have a legitimate chance.

But what is certain is that another player – the First Nations voter – is going to be more deeply involved than ever before.

Several weeks back, Perry Bellegarde, Grand Chief of the Assembly of First Nations, announced that he would not be voting – thereby allowing him to remain impartial – but quickly changed his mind when there was an outcry. Now Mr. Bellegarde is working to mobilize the indigenous vote, convinced that "we can influence 51 ridings."

Perhaps none so much as Nipissing-Timiskaming.

"On average," Mr. McLeod says, "First Nations have not been very active."

In Manitoba, for example, only 37.6 per cent of those eligible on indigenous reserves voted last time out, compared with nearly 60 per cent for the country as a whole.

This time, there is an "Indigenous Rock the Vote" movement. And the latest indigenous celebrity, Alberta's Ashley Callingbull, celebrated her win in the Mrs. Universe contest by calling on her people to vote the current government out of office.

Mr. McLeod believes that Nipissing 10 is more active than most and will be even more active come Oct. 19. Native Canadians may make up only about 7 per cent of the riding's population, but he believes that in a close election they might carry the day. He also wants the same result as Mrs. Callingbull.

"There is a feeling across First Nations," he says, "against the attitude of the Conservative government. We're not happy – and we want change."

What he and others want, he says, is a new "treaty partner," a government they can work with rather than one that they feel has been adversarial. He says he realizes the risks inherent in coming out against the party that might well win the riding in which he lives, but it is a risk he is willing to take.

"At the grassroots level is where it does the most damage," he says. "But we don't care any more. It's scary for First Nations, because we're going out on a limb and we're not being as non-partisan as perhaps our national chief might want. But we're getting to a point where we're fed up.

"Harper boasts of all his cutbacks, but a lot of them are on the backs of First Nations programs – and then he boasts about balancing the budget. It's not right.

"We can't be silent. We have to get out there and vote him out."

This thinking, he says, has turned his First Nation from voting, when they have voted, for an individual candidate to voting strategically – and Mr. McLeod, for one, has settled on the Liberal candidate as the one best positioned to bring that change.

To that end, the Nipissing First Nation has launched information programs, complete with electronic signboards, to get potential voters out registered in time for the advance polls and the Oct. 19 election day.

Mr. McLeod has gone to Elections Canada and the North Bay Nugget to complain that First Nations voters are finding it difficult to register because when they go online to do so they are often being sent an "error" message – the home address entered not being recognized as being part of a polling division. He says he himself failed on eight attempts. Elections Canada has acknowledged the computer glitch and is working to make registering easier for eligible voters in the Nipissing First Nation.

Another initiative is to encourage young indigenous voters to cast their first ballots. On Thursday morning, Mr. McLeod had made a note to contact his daughter Robin, an 18-year-old taking aboriginal studies at the University of Ottawa, and talk to her about the importance of voting, and voting strategically.

"First, though, I checked her status on Facebook," he says. "And what's the first thing I see? A link to a website telling people how they can work together to vote the Harper government out.

"She was already ahead of me." 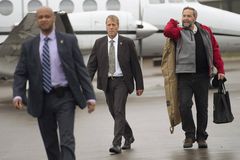