This is where the Republican nomination fight might end, and this is where a little-known, little-understood and little-practised form of American politics will be played out for the first time in almost two-thirds of a century.

For more than a generation, American political parties have gathered in their convention cities – New York, Chicago, San Diego, Dallas and several others – to witness a spectacle that had loads of funny hats, barrels of campaign buttons, ceiling nets full of balloons … but no drama whatsoever. The convention delegates knew before they entered their airport departure lounges that they were going to nominate Lyndon Johnson, or Richard Nixon, or Jimmy Carter, or Bob Dole, or George W. Bush. The party arrived in the convention city for little more than a party.

Maybe not this time. The chances are good that Donald J. Trump will arrive here in late July with a plurality of the convention delegates required for nomination – but not a majority. He will claim he's due the nomination on that basis, but Senator Ted Cruz of Texas and Governor John Kasich of Ohio will bellow that he may be the leader but he hasn't clinched anything.

Then the scrambling will begin.

The truth is that the scrambling has begun already. In places such as South Carolina and Iowa, where the world believes the state Republican nomination fight is over, the battle, in fact, has only just begun.

Mr. Trump won South Carolina decisively, and Mr. Cruz won Iowa narrowly, but that was just the first round. The two states – and many others – still must hold their own local conventions to select the actual delegates for the national convention here. Mr. Trump and Mr. Cruz may have claim on those delegates for the first ballot – but their destiny on the second ballot, and any ballot that follows, is completely unknown. The Democrats required 103 ballots in 1924 to choose their nominee, and in 1952 they required three ballots. No convention in either party has gone beyond a single ballot since.

More than three decades ago, Allan Gotlieb, perhaps the most influential and insightful Canadian ambassador in Washington of the era, identified a great truth of American politics. In American politics, he told me for a 1985 front-page profile in The Wall Street Journal, "it's never over until it's over." And then he added a remark that has unusual bearing on the Republican presidential race 31 years later: "And when it's over, it's still not over."

As a result, the Republican delegate struggle very possibly might not be over when the caucuses and primaries are over, and even the South Carolina Primary and the Iowa Caucuses might not be over now, more than a month after the balloting ended.

Iowa still has to choose 15 statewide delegates plus an additional three delegates designated for party officials; by the time the Iowa process is completed this spring, the profile of the Hawkeye State's delegation almost certainly will be substantially different than it looked late on the evening of Feb. 1, when the caucus results were reported. Just this month, Mr. Cruz lost Louisiana but canny inside moves delivered him more delegates than the television networks and the authoritative newspapers indicated he had captured.

Already the three surviving GOP contenders are preparing subterranean post-campaign campaigns, designed to identify wavering delegates, unpledged delegates, delegates pledged to a candidate who has departed (prime target: delegates pledged to Senator Marco Rubio of Florida), even delegates who are pledged but who might be open to what Mr. Trump called, in the title of his bestselling book, the art of the deal. For Cleveland might be the site of the most significant deal Mr. Trump has ever made – or lost.

Indeed, the very inside game that Mr. Cruz deplores – and that, pointedly, Mr. Cruz never mastered in the Senate chamber – may be the salvation of his candidacy. And the very establishment Republican politicians he has made a career of disparaging – and who revile him personally, almost unanimously – now are gathering at his side in the effort to halt Mr. Trump's nomination. One astonishing example: former governor Jeb Bush of Florida.

This adds a new, unpredictable element to a campaign that has been full of new elements and perhaps unprecedented unpredictability.

The GOP campaign has, as Mr. Trump has claimed repeatedly, brought many new voters into Republican nomination politics. But it also has endangered the GOP establishment, reshaped the character of the party – and embarrassed many party members, according to the latest New York Times/CBS News Poll.

That survey also indicated that about two out of three Republicans believe the notion of a contested GOP convention would be bad for the party.

But party elders, themselves discredited after months of criticism from Mr. Trump, Mr. Cruz and others, have no formal way to prevent a contested convention – and now are in the ironic but uncomfortable position of needing one if they are to stop Mr. Trump. They do not respect Mr. Trump, they do not approve of his language or tactics, they do not believe he can win the election in November, and they fear he may hurt Senate and House candidates running on the Republican ballot line, perhaps even endangering GOP control of the Senate.

That is why it is now in the interest of the party establishment, whose fondest hope ordinarily is to avoid a contested convention, to ensure that the Cleveland conclave is open and the nomination fight unresolved through mid-July.

"Your constitution," Ambassador Gotlieb said three decades ago, "works on the basis of deal making." He might have added that American presidential politics, at least in 2016, may well work that way also.

Don’t be smug, Canada is not insulated from the Donald Trump effect
Subscriber content
March 25, 2016 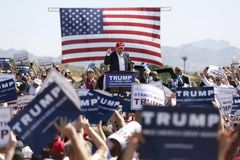