Stephen Harper is washing his hands of the growing Senate expenses scandal as the Auditor-General prepares to unveil a forensic audit flagging hundreds of thousands of dollars in questionable travel and housing claims, saying it's the Red Chamber's problem.

He neglected to mention that it was he who appointed some of the senators who have allegedly fallen afoul of rules, including Mike Duffy and Pierre-Hugues Boisvenu, one of the Conservative Party's top spokesmen on law-and-order issues, whom the Globe and Mail has reported is facing an RCMP investigation over his Senate travel claims.

"Look, obviously we find any abuse of taxpayers' dollars by Parliamentarians … to be unacceptable," the prime minister told reporters during a visit to Kiev where he demonstrated solidarity with Ukrainian President Petro Poroshenko as the conflict with Russian-backed fighters intensifies.

Asked to comment on leaked revelations from Auditor-General Michael Ferguson's report, Mr. Harper said the Senate is a separate entity from the Commons, where he sits, and senators are the ones that called for the watchdog to comb through their expenses.

Now sitting as an independent in the Red Chamber, Mr. Boisvenu is seeking to show that he did not commit a crime in his handling of his Senate expenses. In a statement Friday, he said he will reply to the Auditor-General's findings next week, after the report is officially released to the public.

Mr. Harper once championed reform of the Senate but in recent years alleged wrongdoing by senators -- including several he appointed -- has transformed the Red Chamber into a political albatross for him.

A Senate official told The Globe earlier this week that the Auditor-General raised questions over travel expenses related to Mr. Boisvenu's work with the Murdered or Missing Persons' Families Association, which he founded in 2005. Mr. Boisvenu launched the group three years after his daughter was abducted, raped and murdered by a repeat offender.

Mr. Boisvenu left his position as the association's president when he was appointed to the Senate in 2010, but he stayed on as a special adviser. One of the issues that has been flagged by the Auditor-General, and will now be examined by the RCMP, is whether expenses charged to the Senate should have instead been claimed with the association, the source said.

During his time in the caucus, Mr. Boisvenu was frequently called upon to promote the Conservative government's law-and-order agenda, especially in Quebec where the party has few MPs. Mr. Boisvenu, who is from Sherbrooke, announced Thursday night that he has resigned from the Conservative caucus.

In the report that will be officially tabled on Tuesday, Auditor-General Michael Ferguson is calling for a complete overhaul of the Senate expense system.

The Auditor-General has called for reimbursements from Conservative Speaker Leo Housakos, Conservative Leader in the Senate Claude Carignan and Opposition Leader James Cowan. The three are among the 21 senators who will be asked to reimburse money to taxpayers, if they have not already done so.

As Senate expense scandal grows, why hasn’t Ottawa cut off the money?
June 6, 2015 Stephen Harper’s game of Senate appointment make-believe will end
May 21, 2015 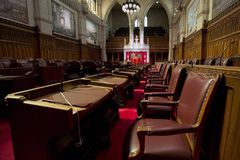