But the Conservative critique of the NDP climate-change plan is evaporating.

"NDP cap-and-trade at $40 per carbon tonne will be a 10 cent hike in gas tax. See Olewiler-Mintz paper on Sustainable Prosperity website," Mr. Mintz tweeted on Thursday, sparking the Tory attack on the surging New Democrats.

Mr. Mintz said his calculations show the NDP's proposal for a cap-and-trade system to restrict greenhouse-gas emissions would add 10 cents a litre to gas prices in the early days and 18 cents a litre by 2014.

There's just one problem: The mini-missive assumed - wrongly - that the NDP would include the fossil fuels that consumers use.

The NDP is actually proposing a system that would encompass about half of the economy's greenhouse-gas emissions, those from very large industrial emitters. Firms that produce oil, natural gas and coal would be part of the system, and would likely face increased costs for the energy they consume, and those expenses could be passed on to consumers.

In an interview, Mr. Mintz said that his assertion of an increase in pump prices was based on the assumption that the NDP plan did encompass fossil fuels used by consumers.

He noted that a cap-and-trade system not including those emissions will be comparatively weak. "You're not dealing with much emissions," Mr. Mintz said.

Mr. Mintz said that a more limited cap-and-trade plan would be unlikely to generate the size of revenues that the NDP is projecting.

Mr. Mintz sits as an independent director on the board of Imperial Oil. However, he has been a vocal advocate for a wide-ranging carbon tax as the best solution for reducing greenhouse-gas emissions.

Economic theory holds that the costs of any cap-and-trade system will eventually filter through to consumers, so it is accurate to say that any increase in costs for energy companies will flow through to consumers. However, without a simultaneous move to increase the cost of imported energy, domestic companies would not have much latitude to boost prices.

At the same time, Mr. Layton is raising the prospect that an NDP government would seek to regulate gas prices if his plan to appoint an ombudsman to investigate pump charges doesn't work.

Mr. Layton said Mr. Harper hasn't wanted to take on oil companies who, he said, seem to be colluding to raise prices.

Mr. Layton has already promised that if his party comes to power he would appoint an ombudsman to investigate whether gas retailers are colluding to "gouge" consumers - but he said Thursday that if that fails he will consider regulating the price that can be charged at the pump.

"This is the kind of option that we have discussed in the House of Commons before," Mr. Layton told reporters at a press conference in Yellowknife.

"Our first step would be to establish the ombudsman and use the competition laws to go after collusion in the industry. If that doesn't work, then we're clearly going to have to look at further measures."

The statement is likely to fuel debate about whose policies will make life more affordable, or more costly, for consumers. Mr. Layton proposed an ombudsman to appeal to those calling for the government to provide relief from price hikes at the pumps - but free-market critics will likely argue gas-price regulation is a heavy-handed intervention that won't help consumers.

Nova Scotia's former Conservative government adopted gas-price regulation in 2006, which keeps prices within a narrow band across the province. But there are mixed opinions about whether it lowers costs to consumers.

And Mr. Harper is trying to convince those consumers that Mr. Layton's policies - cutting $2-billion in oil-industry subsidies and creating a cap-and-trade system that would add costs for large emitters of carbon gases - would hit them in the pocketbook, to the tune of 10 cents every time they buy a litre of gas.

Mr. Layton shot back that the real increase in gas taxes has come from what he called "Mr. Harper's Harmonized Sales Tax" in British Columbia and Ontario - taxes that were imposed by Liberal provincial governments, but encouraged by hefty financial compensation from Mr. Harper's federal government.

"We want to get tough … using competition laws and a new office of an ombudsman to have somebody standing on the side of the consumers," Mr. Layton said. "And I don't accept this analysis that's being offered, that the big polluters should suddenly be justified to raise prices as we're going to have to deal with the costs of pollution."

Mr. Layton's cap-and-trade system is booked in the NDP platform as one of the major sources of revenue that the NDP would use to fund spending promises for green initiatives. Under fire from critics, they have conceded that some spending would have to be delayed if the system could not be set up quickly enough to generate the projected revenues.

But Mr. Harper, now warning of the costs of cap-and-trade, proposed the same thing just after U.S. President Barack Obama took power, when he suggested Canada and the U.S. work on a continental plan to regulate carbon emissions.

"The NDP has been Canada's most consistent, most vociferous and most aggressive opponent of a strong trading relationship with the United States," Mr. Harper warned during a campaign stop in Niagara Falls Thursday morning.

"The NDP approach to issues like trade has not changed since the Cold War. It is an ideological throwback."

The Tories are struggling to confront the rise in the polls for Mr. Layton and Mr. Harper only began sharpening his attack on the New Democrats Wednesday evening.

Speaking in Niagara Falls Thursday morning, Mr. Harper said he hopes Canadians think carefully about how Layton's policies would affect their tax burden and for the economy. 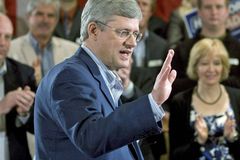 Why did The Globe endorse the Conservatives?
April 28, 2011 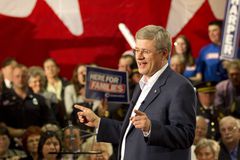 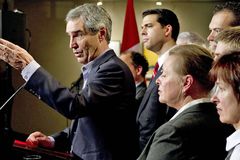 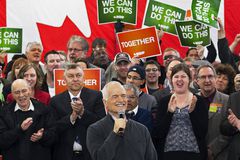 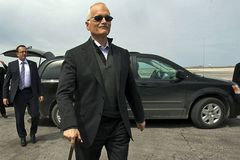 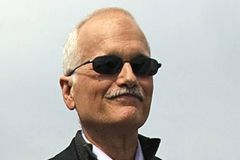 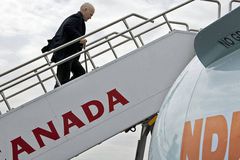 Follow Steven Chase, Campbell Clark on Twitter @stevenchase @camrclark
Report an error Editorial code of conduct
Due to technical reasons, we have temporarily removed commenting from our articles. We hope to have this fixed soon. Thank you for your patience. If you are looking to give feedback on our new site, please send it along to feedback@globeandmail.com. If you want to write a letter to the editor, please forward to letters@globeandmail.com.
Comments