Fifty years ago today, the Progressive Conservative government of John George Diefenbaker was defeated by the Liberal Party, the "natural governing party" of the last century. The party was led by Lester B. Pearson and assisted by U.S. president John F. Kennedy of the United States. In no other election in Canadian history has the United States administration been so activist in its attempt to oust a Canadian government.

Mr. Kennedy and Mr. Diefenbaker had a difficult relationship, and much has been made of the difference in image and style of the two. The picture of a young and "modern" president contrasted with a frumpy prairie populist has been the go-to description of historians and journalists. Time has, however, severely discounted all things Camelot. The squalor of Mr. Kennedy's personal life is well known, and his foreign policy fixations and insecurities have shown him to be not a particularly able president and possibly a dangerous one. Thus, it is perhaps time to recast Mr. Diefenbaker's personal dislike for president Kennedy as prescience rather than petty envy.

Private feelings aside, much of the friction between the leaders rested in policy. For example, Mr. Diefenbaker's government took a different attitude toward Cuba and China, believing that trade was still an important avenue through which to engage these governments, rather than taking the Kennedy approach of isolation, embargo and assassination in the case of Cuba.

But the real schism in the relationship occurred during the Cuban Missile Crisis, when Mr. Diefenbaker refused to put the Canadian military on a war footing at the behest of the American government without first consulting his cabinet. The Department of Defence essentially mutinied and mobilized anyway. The opposition parties and media were outraged at the perception that Canada had not supported the United States at a moment's notice, notwithstanding the fact that Canada was the only American ally to mobilize its NATO forces, a move that the other NATO members refused to do for fear of a "guns of August" scenario leading to total war.

Other allies had little interest in subordinating their foreign policy to the Americans. French President Charles de Gaulle warned that being allied with the United States during the crisis was tantamount to "annihilation without representation." British prime minister Harold Macmillan shared these concerns and while offering political support of the United States, refused to put British forces on alert.

The final straw came when Mr. Diefenbaker was seen by the Americans to be equivocating on the policy of arming Bomarc missiles in Canada with nuclear warheads as well as similarly arming Canadian fighter squadrons in Europe. Hereafter, the Americans actively targeted Mr. Diefenbaker. In January of 1963, the retiring NATO supreme commander and American general gave a press conference in Ottawa where he made it know that Canada had not met its commitment to the alliance. Days later, the U.S. State Department responded to a speech Mr. Diefenbaker made in the House of Commons by issuing a press release essentially calling Mr. Diefenbaker a liar: "[the Canadian government] has not yet proposed any arrangement sufficiently practical to contribute effectively to North American defence."

Within days of the American intervention, Lester Pearson, the Nobel Peace Prize winning leader of the Liberal opposition, switched from opposing nuclear warheads to supporting them, much to the discomfort of many in the Liberal Party. Mr. Diefenbaker, faced with caucus revolts and a media maelstrom, sought an election.

Lester Pearson and the Liberals believed they were on the way to a majority. Mr. Pearson's campaign received advice from Kennedy advertising gurus, and the U.S. Ambassador to Canada gave anti-Diefenbaker media briefings in the basement of the U.S. Embassy. Despite these efforts, Mr. Diefenbaker's gifts as a campaigner held the Liberals to a minority government.

Nonetheless, the Americans were pleased. The U.S. Ambassador commented that " …the outcome holds salutary lessons which will not be overlooked by future aspirants to [Canadian] political office." The American intervention would not go unnoticed internationally. The German Chancellor Adenauer expressed alarm at the American "hatchet job" against Mr. Diefenbaker.

And what happened to the Bomarc nuclear missile? Once the Pearson Liberals were in power, the nuclear warheads were indeed delivered. However, within 10 years, Pierre Trudeau would remove them.

The 1963 election marked the end of the Diefenbaker experiment and the start of Mike Pearson's government. It also represented the low point in post-world-war U.S.-Canada relations.

J.C. Bourque is a business strategy consultant in Toronto. He has worked on several campaigns for the Progressive Conservative Party of Ontario. Joe Martin is the Director of the Canadian Business History Program at the Rotman School of Management.

Basil Robinson was an effective aide to Diefenbaker
February 10, 2013 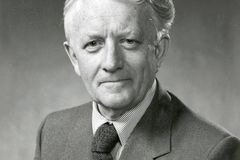