Jim Flaherty's latest budget is as much about what little it contained as what was absent from it – a feared kick against Quebec.

If it is remembered at all, Tuesday's budget will be known as the one before the election-year bang that set off fireworks for the Conservatives' re-election bid.

In a budget that held the line on balancing the books by 2015, Mr. Flaherty essentially rejigged numbers while hitting smokers, established wireless operators and retailers that charge suspiciously more to Canadian shoppers than American ones.

It is no secret the Conservatives are keeping all their ammunition for the next budget, with the noteworthy exception of the $500-million allocated to Ontario's automotive industry. But this budget is very much an electoral budget – albeit from a Quebec standpoint.

As election talk has hit a fever pitch in the province, with rampant speculation Premier Pauline Marois will kick off a campaign in March, Mr. Flaherty has refrained from provoking Quebec with a restraint that stands in contrast to last year's budget.

A year ago, Ottawa announced it would reclaim a sizable chunk of the job-training money from the provinces, pressed on with a national securities regulator and determined it would wean labour funds – the two biggest are based in Quebec – from their federal tax breaks. Mr. Flaherty's budget came across as an attack on the province – Quebec Finance Minister Nicolas Marceau called it an "exercise in economic sabotage."

Ottawa hasn't budged on those issues, notably on job-training funds. Mr. Flaherty even set an April 1 deadline for the start of the Canada Job Grant program, stating the federal government will bypass the provinces that fail to agree with Ottawa on how the program should be tailored.

But on other issues, such as the national securities regulator, Mr. Flaherty has toned down the rhetoric. "Along with British Columbia and Ontario, the government continues to invite all other provinces and territories to participate in the implementation of the co-operative system." While aggressively pursuing its agenda to establish the regulator, the federal government is speaking softly. Disguised as the grandmother, the big bad wolf in Little Red Riding Hood would speak no differently.

Moreover, the federal Finance Minister has not opened a new front with Quebec. Recent comments by Denis Lebel about how uncomfortable the Intergovernmental Affairs Minister was about Quebec's high equalization payments raised concerns that Ottawa would revise the complex formula by which money is redistributed in Canada. On Monday, at a cocktail organized by Montreal's financial community, Mr. Marceau said he feared "nasty surprises." They didn't come.

Mr. Flaherty's budget was also deliberately short on details on the Champlain Bridge's controversial replacement. Recent cracks in the federally owned structure spooked commuters and forced emergency repairs that created nightmarish traffic jams on one of the country's busiest spans. Ottawa will commit $378-million to repair federal bridges around Montreal – with Champlain likely taking the lion's share. Ottawa will also spend $165-million to lay the groundwork for the construction of the new bridge by 2018.

But as Montreal anxiously awaits details on what the new bridge will look like, how much it will cost and on how it will be financed, the Conservatives were careful to steer away from this hot-button issue. While the Parti Québécois is about to rev up its buses and hit the campaign trail, the last thing Ottawa wants is to fuel its re-election campaign. 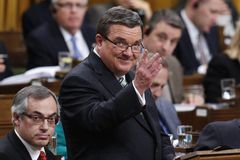