Parti Québécois Premier Pauline Marois is preparing to call an election on Wednesday for an April 7 vote, convinced the popularity of the secular values charter has given her the edge she needs to win a majority government.

On Wednesday, Ms. Marois will hold a cabinet meeting, and shortly afterward she is expected to call on Lieutenant-Governor Pierre Duchesne to dissolve the National Assembly and launch her campaign. PQ strategists met in Montreal on Monday.

Early last week, pressure from ministers, caucus members and advisers eager to start the fight persuaded Ms. Marois to call an election earlier, rather than wait an extra week as she had originally planned. According to sources, Ms. Marois had nothing to gain from the additional week and believed it was best to take immediate advantage of the momentum gained from recent public opinion polls. One showed the PQ at 40 per cent, and another showed a majority of Quebeckers support Ms. Marois's proposal to adopt a secular charter that calls for a ban on the wearing of overt religious symbols, including hijabs, kippas, turbans and large crosses, in the public sector.

The election call comes only 18 months after the PQ won a minority government in September, 2012.

In the past few weeks, the PQ has unveiled several job-creation initiatives. It has also courted the business community with a number of actions, including exploration of the Anticosti Island oil reserves; financing of a controversial cement plant in the Gaspe region; arriving at a deal with Alcoa Inc. to allocate preferential hydro rates to aluminum smelters; and a budgetary measure aimed at protecting Quebec businesses from foreign takeovers. Ms. Marois appealed to female voters with the announcement of several prominent female candidates.

And on Monday, in what may be a sign the PQ will attempt to boost support for its sovereignty option, Ms. Marois released a government report that concluded federal government intrusions into the provincial realm of health care led to disrupted services and costly overlaps and duplications, and that Ottawa had failed to pay Quebec its adequate share of health-care funds.

"The gap between what it [Quebec] received and what it should have received given its demographics is $830-million for the 2002-2013 period," the report concluded.

Health care is certain to emerge as a key issue in the campaign, with the Liberals also planning to make gains on this front.

Liberal Party Leader Philippe Couillard shocked observers by announcing Gaétan Barrette – the former head of Quebec's federation of specialist physicians and a Coalition Avenir Québec candidate in 2012 – will be running as a Liberal in the Montreal south shore riding of La Pinière, held by former Liberal MNA Fatima Houda-Pepin, who left the caucus over a dispute over the party's position on the secular charter.

As a CAQ candidate, Mr. Barrette called the Liberals "incompetent" and accused former health minister Yves Bolduc of being too passive. On Monday, both sides buried the hatchet.

"We now have the best health team ever," Mr. Couillard boasted at a news conference. Mr. Bolduc, who in 2012 had accused Mr. Barrette of being a "radical," said it was time to move on. "You know what kind of relations Dr. Barrette and I had in the past. All of that is forgotten. Welcome to the Liberal Party, Gaétan," Mr. Bolduc said.

In another surprise move, Mr. Couillard recruited Hélène David to run in the safe Liberal riding of Outremont. She is the sister of Françoise David, co-leader of the left-wing pro-sovereignty party Quebec Solidaire.

CAQ Leader François Legault was visibly upset over Mr. Barrette's decision to run as a Liberal, accusing him of being an opportunist. Mr. Legault recently lost anti-corruption crusader Jacques Duchesneau, who resigned his seat, and Dr. Barrette's move is another major blow to the CAQ Leader who has failed to attract prominent candidates for the upcoming election. 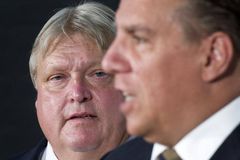 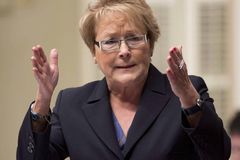