"What they were trying to do was put people in the Senate who would, in effect, provide third-party validation of Stephen Harper as someone Canadians can trust," Mr. Duffy told Ontario Justice Charles Vaillancourt, noting that in 2008, many voters were still unsure about Mr. Harper.

It was the first time Mr. Duffy has spoken publicly since he stood briefly to plead "not guilty" to the 31 charges of fraud, breach of trust and bribery back when the trial started in April.

The 69-year-old is much thinner now and so is the crowd in the courtroom, much of the excitement around the affair having evaporated with the October electoral defeat of the Conservative government.

Mr. Duffy has long waited to tell his side of the story on his contested living and office expenses and the clandestine $90,000 he received from Mr. Harper's chief of staff Nigel Wright to repay some of those claims.

Mr. Duffy has maintained that he was railroaded by Mr. Harper's staff into repaying the claims, when he never thought he had done anything wrong.

"Nothing in my life … has been simple or straightforward," Mr. Duffy told his defence lawyer, Donald Bayne, at one point.

That Mr. Harper saw Mr. Duffy as a political tool is central to one aspect of the defence's case. A large portion of the charges relate to travel expenses that involved political fundraisers and other partisan activities, and the defence argues Mr. Duffy was expected by the prime minister to do that work.

Earlier in the trial, a photo was entered into evidence with Mr. Harper's inscription: "One of my best, hardest-working appointments ever."

Mr. Duffy recounted a meeting with Mr. Harper in December, 2008, when the prime minister asked him if he would sit in the Senate for Prince Edward Island.

Mr. Duffy suggested he represent Ontario instead, because that's where he lived most of the time.

But Mr. Duffy said Mr. Harper "was bound and determined it was going to be P.E.I.," and was satisfied that the cottage the TV host owned in the province made him qualified to represent the island in the Senate.

When an academic began suggesting in the media that Mr. Duffy was not qualified because he wasn't actually "resident" in the province, Mr. Duffy said the PMO and the Senate leadership assured him he had nothing to worry about.

That constitutional qualification is not being challenged at the trial, but Mr. Duffy has hinted that he was told he might lose his seat if he didn't go along with the PMO's face-saving plan to have Mr. Wright repay his expenses.

In other words, he was not bribing anyone to pay back his expenses, as the Crown suggests, but the operatives were threatening him.

The defence strategy on the first day of testimony was to build a portrait of a man with: solid ties to Prince Edward Island; a long, successful journalism career with no experience running an office; chronic health problems that made him vulnerable to pressure.

Mr. Bayne began by taking his client painstakingly through his family ties to The Island. Mr. Duffy's grandfather Charles Gavan Duffy, for example, was the Speaker of the provincial legislature. His parents spent their lives there and his siblings are still there.

Mr. Duffy outlined how he parlayed a TV gig as a teenager into a newspaper job at the age of 17. He then moved into radio and wangled his way to Ottawa and eventually a job with the CBC.

Along the way, he became captivated by politics, calling it: "A fascination and what I committed my life to."

By 1978, he was working as a national CBC reporter and travelling the world.

That's when his first marriage began to fall apart, which he blamed on overwork. He lost his children. He slept poorly, started to drink too much, piled on pounds.

"I was pretty depressed," Mr. Duffy said in response to a question about his mental health.

Still, Mr. Duffy's career continued upward. He was eventually hired away from the CBC to host a CTV show called Sunday Edition. He met his current wife Heather while working there.

He spent 20 years with the network before receiving the invitation from Mr. Harper to sit in the Senate in late 2008.

Mr. Duffy is expected to testify for at least the next few days.

Duffy pal back in court to testify over Senate contracts
May 15, 2018 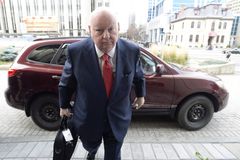 Duffy defence plays up credentials of consultant friend Donohue
May 15, 2018 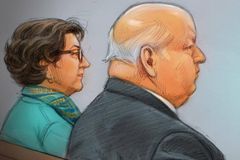 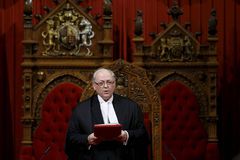