A gathering of Nova Scotia NDP supporters ended Saturday with the faint sounds of a protest over how the province's justice system has handled the Rehtaeh Parsons case.

About 20 protesters could barely be heard chanting and drumming outside the hall in Halifax where federal NDP Leader Tom Mulcair delivered a speech to a provincial party preparing for an election.

Mulcair and Marilyn More, Nova Scotia's minister responsible for the status of women, met with some of the protesters privately following his speech.

Mulcair said he would listen to their concerns and identify whether there are other legislative approaches that can be taken in the case.

"(I will) try and listen to see if there are some aspects of the legal side and parliamentary side that we hadn't thought of," said Mulcair, accusing the Conservatives of dragging their feet in changing the Criminal Code to include laws against cyberbullying.

More, who was appointed to oversee the province's response to Rehtaeh's case, said she agreed to meet with the group in a month to discuss the progress of an independent review of how the Halifax Regional School Board responded.

There will also be a review of the RCMP's original investigation once the current probe concludes.

Earlier in the day, Nova Scotia Premier Darrell Dexter highlighted his government's successes over the past four years at what will likely be the party's last annual general meeting before an election.

Dexter said his party helped bring multibillion dollar projects to the province, like a $25-billion federal shipbuilding contract and the Maritime Link portion of the Muskrat Falls hydroelectric project.

He also noted more recent initiatives such as extending dental care for younger children and providing funding for insulin pumps for youth.

Dexter slammed the Liberals for their plan to dismantle district health authorities and create one large board.

"They would strip local communities of having a voice," said Dexter.

He also took a jab at Stephen McNeil, showing a short video clip of the Liberal leader and criticizing the party's track record.

"We want to give those communities the ability to make decisions and not have it dictated by these large district health authorities," said McNeil from Weymouth, N.S.

The NDP government's five-year mandate runs out in June, 2014, but it is expected to call an election sometime this year. 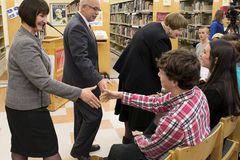 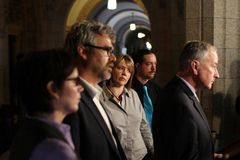 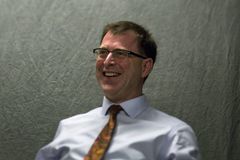 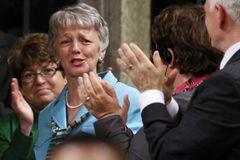