With one decisive wave, Quebeckers have flooded their federal electoral map with orange and drowned the sovereigntist protest party they created 20 years ago.

A stunning New Democrat surge was matched by the utter collapse of the Bloc Québécois, with the NDP winning 58 of Quebec's 75 seats. The Bloc was left holding four ridings - not enough for official party status.

Even Gilles Duceppe lost his seat and resigned as Bloc leader.

The Liberal Party, for more than a century the dominant federalist option in Quebec, was also reduced to a rump of seven seats. Vast sections of the formerly safe West Island went New Democrat. Conservatives also took a hit, losing almost half of their seats. Cabinet ministers Josée Verner, Lawrence Cannon and Jean-Pierre Blackburn all lost.

The NDP went from never having more than one seat in Quebec to one of the biggest federal election wins in the history of the province. The Orange Wave of 2011 will be remembered with the massive wins of Pierre Trudeau in 1980 and Brian Mulroney in 1984.

"We worked hard for this. We earned this," said Thomas Mulcair, the NDP MP who had spent two years as a one-man Quebec caucus before Monday night.

Provincewide, the NDP had 43 per cent of the popular vote, a 20-point lead on the Bloc that was beyond even optimistic polls. The Conservatives had 16 per cent and the Liberals were at 14 per cent support.

Quebec turned toward the federalist option and away from the Bloc for the first time since the Meech Lake constitutional accord was defeated more than 20 years ago - an event many francophone Quebeckers considered a humiliation.

The overwhelming result had Quebec news readers stuttering at the sight of a crushingly orange electoral map.

Even if federalists won the day, the news may not all be good for national unity. More than 82 per cent of Quebeckers opted for centre- and left-leaning parties and the Conservatives lost or were losing in five of the 11 seats it held going into the campaign.

The Conservatives may have won the election nationally, but their rejection in Quebec was firm and the province will have scant representation in government for the next four years.

With the Bloc wiped out, sovereigntist energies will now be concentrated on the provincial Parti Québécois.

"It seems people have turned to a new kind of hope. People made that choice and we have to respect their choice. That is democracy," said Mr. Blackburn, the defeated minister of veterans affairs.

The news was hardly better for Liberals, who lost much of their own stronghold in western Montreal. Seats once thought Liberal, or at least contests between Grit and Bloquiste, suddenly became three-way contests.

Prominent Liberal MPs such as Justin Trudeau, Stéphane Dion, Denis Coderre and Irwin Cotler were among the handful of survivors. Marlene Jennings, Pablo Rodriguez and Alexandra Mendès were defeated.

There was no celebrating at Mr. Cotler's campaign headquarters as he appeared to slowly pull away.

"I'm getting hit from the left and the right," said Mr. Cotler, reflecting a problem that turned several West Island ridings from red to orange.

"This was the hardest campaign because it was the meanest. I have had to fight off lies every day."

By midnight, among the few safe MPs in the tiny Quebec government caucus was Mr. Harper's Quebec lieutenant, Christian Paradis and Denis Lebel in the Saguenay-Lac-St-Jean region.

Conservative Maxime Bernier was one of the few incumbent MPs easily re-elected.

With a report from Julian Sher in Montreal 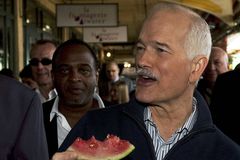 Quebec braces for a shift in the political landscape
April 30, 2018 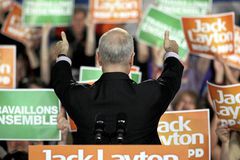 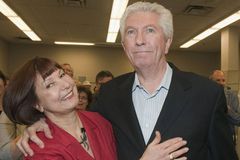