The NDP is stepping up its aggressive targeting of Justin Trudeau and his Liberals through a new postcard campaign warning voters that the Grit plan will cut $6.5-billion from services, including health care.

Party volunteers are poised to go door-to-door to distribute the "This isn't real change" postcards in key ridings in the Greater Toronto Area and Ottawa, where strategists believe people are more sensitive to Liberal cuts, says an NDP official. There are some high-profile and tight NDP/Liberal fights in Toronto. Incumbent Liberal Adam Vaughan is battling former NDP MP Olivia Chow in the downtown riding of Spadina-Fort York, and Trudeau advisor and incumbent Liberal candidate Chrystia Freeland is in a competitive race with NDP candidate Jennifer Hollett in another downtown Toronto riding.

Nationally, it's been a three-way battle so far during this 78-day election campaign. But with fewer than three weeks remaining, the NDP is losing some momentum in the national public opinion polls, dropping after two mediocre performances by leader Thomas Mulcair in the recent French-language debate and the Munk Debate on foreign policy in Toronto Monday night. Mr. Trudeau was judged by many pundits as the leader showing a different way forward, and being the only leader offering change.

Bruce Anderson and David Coletto, pollsters at Abacus Data, released numbers on Tuesday that show Mr. Trudeau represents "ambitious" change to many voters; Mr. Mulcair is seen as the leader representing "moderate" change and that puts him at a disadvantage among Liberal-NDP swing voters as they want change sooner rather than later.

The NDP needs to change the narrative. Its postcard campaign will build on this perception that Mr. Mulcair, not Mr. Trudeau, is the trusted agent of change. The top half of the card features a large picture of the Liberal leader on a red background and the words, "Justin Trudeau will cut $6.5-billion from the services your family relies on." It also includes a quote from Toronto-area Liberal candidate and MP John McCallum, one of Mr. Trudeau's economic advisors, saying "Nothing is totally off the table." He said that as he was outlining the party's economic platform last Saturday.

The Liberals, if they form government, say they will invest in infrastructure and run three modest deficits; in the fourth year, they would post a small surplus. Their plan outlines $146.5-billion in new spending and tax cuts.

Meanwhile, the words "This isn't real change" are written on an orange-coloured background. The bottom half of the card features a picture of a smiling Mr. Mulcair and the text: "Only Tom Mulcair can repair the damage Stephen Harper's Conservatives have caused." It lists what the NDP says it will do if it forms government, including hiring more family doctors, implementing a universal drug plan and expansion of home care.

This week the NDP is also launching a series of radio ads accusing Mr. Trudeau of having bad judgment, The Globe and Mail's Bill Curry writes in Wednesday's newspaper. There are three new ads featuring narrators who say they were considering voting for Mr. Trudeau but are having second thoughts. The ads end with the line: "Justin Trudeau; he just lost my vote." The party is also running a television ad that goes after the Liberals. 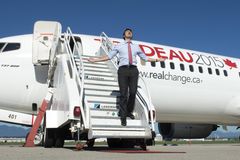 Liberals battle NDP for public service vote ahead of federal election
May 15, 2018 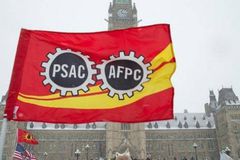 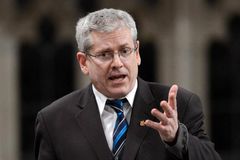