The Harper government appears to be low-balling the cost of its corporate tax cuts, according to a report by Parliamentary Budget Officer Kevin Page.

The PBO released a report Friday in response to a request from the House of Commons finance committee seeking cost estimates related to corporate tax cuts, crime bills and the government's planned purchase of F-35 fighter jets.

On all three issues, the PBO reports that Ottawa would only provide a small amount of the data requested to assess the veracity of the government's own estimates. As a result, the PBO said it cannot price the justice bills. The office will provide its own estimate on the cost of the fighter jets in the next few weeks even without the requested government data.

However, using newly-released information on corporate profits that the government tabled last week, the PBO reports that Finance Canada appears to be taking an overly optimistic view of future corporate profits and tax revenue.

The PBO says it can't explain why there's a $1.5-billion difference between Finance and the PBO in terms of the estimated cost of the cuts. The PBO has asked Finance to provide more detail as to its assumptions and cost estimates.

Meanwhile, Finance Minister Jim Flaherty addressed a business audience in Halifax Friday and Liberal finance critic Scott Brison delivered a speech of his own in Moncton.

Following Mr. Flaherty's speech, Mr. Flaherty commented on corporate tax cuts but was not asked directly about the PBO report.

He said the government would be going ahead with its corporate tax cut plan and called on the private sector to do more to encourage growth in the Canadian economy. He repeated his view that next month's budget will not announce large new programs.

"We need to have a reasonable budget for Canadians," he said. "We want to maintain social transfers in Canada. That's clear. We don't want to repeat the actions of the Liberal government in Canada 15 years ago when they reduced transfers."

Annette Robertson, a spokesperson for Mr. Flaherty, said the difference in projections is because Finance uses "detailed tax data that allows the Department of Finance to better account for the realities of the income tax system."

Ms. Robertson pointed out that both Finance and PBO project higher business tax revenues in the coming years.

"It should be noted, if the Liberals were to hike taxes on businesses that would clearly slow economic growth," she said in an e-mail.

In recent days, NDP Leader Jack Layton has said Mr. Flaherty's budget next month will have to include substantial action on NDP priorities or his party will not support the budget.

The Conservative government needs the support - or abstentions - of at least one of the three opposition parties in order to survive the string of confidence votes that follow the tabling of a federal budget.

Meanwhile in Moncton, Mr. Brison challenged the Conservative claims that they are good economic managers by focusing on the size of the current deficit and expanding debt load.

Mr. Brison argues that Canada's relatively strong performance during the recession is due to decisions by Liberal governments to balance the books and tighten banking rules, rather than any measures taken by Conservatives since 2006.

In an interview, Mr. Brison linked his party's opposition to further corporate tax cuts to the negotiations over the renewal of federal health transfers. He noted that the Liberals increased transfers dramatically in government once the books were balanced. Ottawa is committed to increasing health transfers by six per cent a year through to 2013-14, but negotiations are just beginning as to what those transfers will look like after that.

"Health-care costs have gone up in every province and will continue to rise even more rapidly with the aging demographic. So this is going to be a very important, and potentially a very difficult, negotiation with the provinces," Mr. Brison said. "So it is not just economically irresponsible to gut Canada's fiscal capacity with a further corporate tax cut on the eve of these discussions, but it's also socially irresponsible, because the health-care system that all Canadians depend on requires a federal government that protects the fiscal capacity of the federal government to invest in that health care system."

The Liberals promise they will erase Canada's deficit by 2015-16, which is the same as Mr. Flaherty's target.

"The Conservatives have no plan to do it," said Mr. Brison. "And that's not just me saying it. That's what the [International Monetary Fund]says and that's what the [Parliamentary Budget Officer]says. We've got to get the books balanced and we've got to restrain spending and not spend money on untendered fighter jets and U.S.-style mega prisons and we can't cut corporate taxes further right now on the eve of these negotiations. It's a choice."

Earlier Friday, Finance released its monthly Fiscal Monitor, updating the government's revenues and expenses up to and including December 2010. For those first nine months of the fiscal year, Canada's deficit was $27.4-billion. That's down from a deficit of $39.4-billion during the same nine months the year before thanks to higher revenues and lower expenses.

These figures strongly suggest Mr. Flaherty will be able to announce in next month's budget that the current year's deficit will be lower than the $45.4-billion deficit estimated in October. 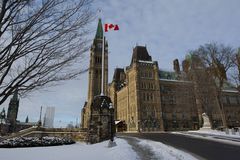 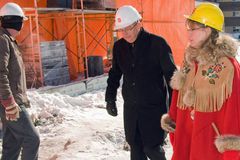 Liberals focus on finances, but offer no details
February 23, 2011
Follow Bill Curry on Twitter @curryb
Report an error Editorial code of conduct
Due to technical reasons, we have temporarily removed commenting from our articles. We hope to have this fixed soon. Thank you for your patience. If you are looking to give feedback on our new site, please send it along to feedback@globeandmail.com. If you want to write a letter to the editor, please forward to letters@globeandmail.com.
Comments