Pat Martin says Commons Speaker Andrew Scheer "did himself proud yesterday" by instantly cutting off a Conservative colleague who referred to the New Democrat as a "fool."

"I think it's great," the Winnipeg MP told The Globe Wednesday morning. "He definitely passed his first test and raised the bar significantly."

There has been an attempt to raise the level of decorum in the Commons in this new Parliament. But Mr. Martin, who like his NDP colleagues has taken a no-heckling vow, was the victim of some rude language by Tory MP David Anderson.

In answering Mr. Martin's question about the wheat board, Mr. Anderson suggested his opposition rival had "made a fool of himself" in the past for asking about the government's plan to dismantle the board.

The Speaker stood up and cut off Mr. Anderson - to the delight of Mr. Martin.

"I did go up to and speak to him afterwards," Mr. Martin said. "I told him I appreciated his bold move."

Mr. Martin also asked Mr. Scheer about wearing his "Opto Civiltas" button in the Commons. Political buttons are usually prohibited, but Mr. Martin had these printed to encourage civility and decorum in the chamber.

Mr. Scheer told him it was fine but took Mr. Martin to task for his Latin. "He claims it should say 'Opto Civiltatem,'" the New Democrat said.

"So the message he's sending is, you can still play a physical game, just no head shots," Mr. Martin concluded. "You can still go hard into the corners, just keep your elbows down."

John Baird is absent from the contentious debate over where his government will find $4 billion annually in cuts - and David McGuinty believes it's on purpose.

The Ottawa Liberal MP suggested Mr. Baird, the Foreign Affairs Minister who also represents an Ottawa riding chock-full of public servants and businesses that buy and sell to government, is being protected from blowback over the government's cost-cutting exercise.

More than that, he said, there are no ministers from Ottawa on the cabinet committee trying to identify the cuts who will defend public servants. The exception is Senator Marjory LeBreton, who comes from the area but who Mr. McGuinty said does not have a mandate because she is not elected.

"None of the MPs elected in this National Capital Region will dare speak about this issue whatsoever except to rear up and deny that anything of any consequence will happen here," Mr. McGuinty said.

Public-service unions are concerned about how deep the cuts will be. The Prime Minister said in Question Period Tuesday his government will find billions of dollars in "fat" to cut. And a report in the Sun newspapers notes there could be as many as 40,000 jobs cut from the public service - in addition to 40,000 from attrition - if Stephen Harper wants to balance his books by 2014-2015.

The problem, Mr. McGuinty said, is that the government has yet to reveal its plan or blueprint. "Where are you taking us? What does it look like? What will be the effects? To deny that there won't be any affect on public services as well as public servants is not honest."

He believes there should be someone from the Ottawa area providing input and explaining the net economic effects of these potential cuts. "Nobody seems in this team to be speaking for a strong and important public service without which politicians, frankly, can't do their work," Mr. McGuinty said. 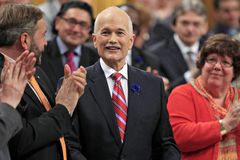 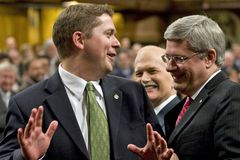 Young father to bring 'friendly' manner to Speaker's chair
June 2, 2011
Follow Jane Taber on Twitter @janetaber1
Report an error Editorial code of conduct
Due to technical reasons, we have temporarily removed commenting from our articles. We hope to have this fixed soon. Thank you for your patience. If you are looking to give feedback on our new site, please send it along to feedback@globeandmail.com. If you want to write a letter to the editor, please forward to letters@globeandmail.com.
Comments