The federal government and the centre created to preserve the memory of Canada's residential schools are asking the Supreme Court to rule that the intimate and heart-wrenching tales of abuse recounted by survivors in closed-door compensation hearings should be preserved in national archives.

They urged the top court on Thursday to overturn the Ontario Court of Appeal ruling that documents related to the hearings held under the Independent Assessment Process (IAP) should be maintained for 15 years and then destroyed unless the claimants explicitly agree that the National Centre for Truth and Reconciliation (NCTR) in Winnipeg should have them.

And a lawyer for the NCTR told the court that reconciliation requires knowledge, not the destruction of the past. The documents of the IAP "provide a unique window into the horrors of the residential schools and Canada's efforts to come to grips with those horrors," Joanna Birenbaum said.

The IAP was created as part of the Indian Residential Schools Settlement Agreement, the largest class action in Canadian history, as a non-adversarial and private way to determine how much compensation claimants should be given for the physical and sexual abuses they suffered at the church-run schools. Claimants were told by their lawyers, the adjudicators and lawyers for the federal government that the testimony they provided would remain confidential.

As a result, Ms. Birenbaum said, the court is now being asked how to respect and honour promises that were made to survivors in the hearing rooms but, at the same time, meet what the NCTR believes "is the undeniable state duty to preserve records of mass atrocity."

Destruction of the documents would be irreversible, she said, and it is impossible to know whether there will be valid reasons to access them in the future, perhaps even to assess the work of the IAP.

The centre says redaction of names and other identifying markers from the records would preserve claimants' privacy.

But lawyers for the Indian Residential Schools Secretariat, which administers the IAP, for the legal counsellors who represented claimants at the hearings, for the Assembly of First Nations and for the Inuit say preserving the documents mean they could be read and survivors' secrets would be divulged.

"The issue today is whether it's the claimants who have control over the most intimate, private and painful stories of their lives, or is it Canada, the government that was largely responsible for those stories in the first place?" Joseph Arvay, the lawyer for the IAP, told the court.

The court withheld judgment until a future date.

Among the things the justices will decide is whether the documents created during the IAP hearings belong to the government, as the Justice department argues, or if they are part of the judicial process, which is the position taken by the Ontario court. The government's argument hinges, in large part, on them being government documents.

Although survivors can opt to have their documents preserved at the NTRC, Ms. Birenbaum pointed out that many have died since they testified at an IAP hearing.

"One of the survivors said, 'I don't want my grandchildren's grandchildren to know about the story.' That's how secret this is," Mr. Arvay said. "What is it about the granular details of the abuse that will do anything to make Canada a better place if they are disclosed?"

As to the argument that the records must be kept to preserve the horrible legacy of the schools, he pointed out that the Truth and Reconciliation Commission, which was also part of the settlement agreement, wrote a massive report after a multiyear study of the abuse that contains the testimony of thousands of survivors.

"No one," Mr. Arvay said, "is ever going to forget about what happened."

Trudeau to ask Pope to apologize over residential schools
May 19, 2017
Student-on-student abuse in residential schools an ‘unspoken truth’: Sinclair
May 2, 2017
How a Sixties Scoop survivor fought for justice and found her family again
February 17, 2017 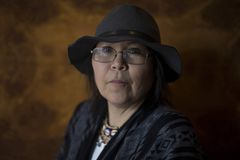