The Quebec National Assembly's ethics watchdog has launched an investigation into whether former media tycoon Pierre-Karl Péladeau broke any rules when he urged the government to intervene in a business deal involving his family business.

Ethics Commissioner Jacques Saint-Laurent confirmed his decision Friday afternoon, hours after Mr. Péladeau apologized for engaging in what appeared to be lobbying on behalf of his company in the sale of a Montreal movie production company.

Mr. Péladeau, who is now an MNA, posted an open letter on his Facebook page on Friday morning to defend his actions, saying he was trying to make sure the company remained under the control of Quebeckers.

Though a rookie politician, Mr. Péladeau is the front-runner in the race for the leadership of the Parti Québécois. He was reacting to a La Presse article revealing that he had twice asked the Quebec government to thwart the potential sale of the Montreal company Vision Globale to an American fund.

"My actions were solely motivated by my belief in the importance of keeping a company under the control of Quebec interests, especially since Mel's studios benefited in the past from public financing," Mr. Péladeau said in his letter. "I never intended to favour Quebecor."

The Cité du Cinéma is one of Canada's leading film facilities and the only studios in Montreal that can host major Hollywood productions. A post-production company, Vision Globale, purchased the studios in 2012 with the help of $4-million from the province's venture capital fund, Investissement Québec, and $23-million from a tax-advantaged Desjardins venture fund.

Vision Globale has since been beset by financial problems and is reportedly looking at offers from two bidders, Quebécor and Clearlake Capital Group, a Los Angeles private investment firm.

"Here's a company that created value, that is being lost to American hands ... Isn't it the role of Investissement Québec to find alternate solutions so that our companies remain in the hands of Quebeckers and continue to enrich the collectivity?" Mr. Péladeau asked.

Mr. Daoust replied that he didn't want to give details about the two bidders because negotiations were still ongoing. However, the minister suggested it wasn't simply a matter of choosing between similar bids because the two offers "are far from being equivalent."

In his Facebook letter, Mr. Péladeau said he intervened in the case only as a result of his work as a legislature member.

He said he was concerned about the planned demolition of the unused Mirabel airport terminal, which is located in his riding of Saint-Jérôme. He said he thought the airport complex could be turned into a sound stage so he contacted Mel's Studios and learned that it was up for sale.

It was at the prompting of the management of the studio that he asked Quebécor and Investissement Québec to get involved, he said in the letter.

In addition to his remarks at the July 2 committee hearing, La Presse reported that Mr. Péladeau made a phone call on May 13 to an Investissement Québec official to promote the Quebecor bid. A spokesman for Mr. Péladeau confirmed to the paper that the call took place.

"If I placed myself in an apparent situation of conflict of interest in regards to the Code of Ethics of members of the National Assembly, I apologize," Mr. Péladeau said in his letter.

Mr. Péladeau's tangled political and business interests have been in the news all week.

He stepped down as Québecor CEO last year and was elected to the National Assembly in April, though he remains the company's controlling shareholder.

The legislature's code of ethics only requires that cabinet ministers divest their shares, not opposition members. However, Mr. Péladeau's case has raised concerns because Québecor is the province's largest media conglomerate, operating newspapers, magazines and a television network.

Mr. Péladeau says he hasn't decided whether to seek the PQ leadership but he pledged Wednesday to place his Québecor stake in a blind trust should he become the head of the PQ.

His blind-trust offer came just before the National Assembly passed a motion to ban members from holding a controlling stake in a media company. The proposal is now before a legislature committee that will report Nov. 19.

The controversy has also hurt Jean-François Lisée, another PQ member with leadership ambitions. Mr. Lisée was vocal in criticizing Mr. Péladeau's decision to hold on to his shares but found himself isolated. Former PQ minister Louise Beaudoin told Radio-Canada Thursday that Mr. Lisée likely has no future anymore in the PQ.

"He's done in the Parti Québécois ... knowing this party as I do, they are hating him," she said.

Opinion
A short Quebec honeymoon for Couillard
May 12, 2018

Parizeau says Quebec sovereigntists ‘stand before a field of ruin’
May 12, 2018 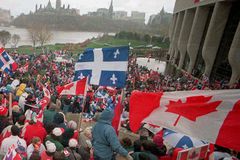 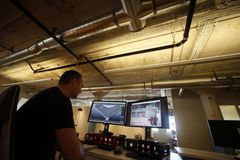 Péladeau to put Quebecor shares in blind trust if he becomes PQ leader
May 12, 2018 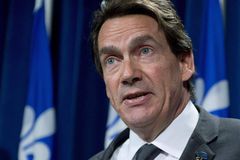