The old adage that "a customer comes first" applies to pretty much any successful business in any free market. But in a federally regulated industry like Canada's railroads, there have been moments in times past when customers wondered if they were the last thing on the railroads' minds. This is especially true in situations where a monopoly exists, and shippers have few if any options except railroads to get their product to market. If the railroad isn't there for them, they're done. It is understandable then that stakeholders – including shareholders, shippers, and the federal government – have a keen interest in the future leadership and direction of Canadian Pacific Railway, because operating a railroad safely, profitably and efficiently ultimately requires both good management and good stakeholder relations.

I was (at different times) both the minister of agriculture and transport minister in the Conservative government, and it's been my experience that the government places great importance on meeting railway safety and service requirements. In fact, concern about these two issues was the catalyst behind the federal railway service review launched in 2007. The review was to examine the effectiveness of the supply chain, which is critical to meeting the government's objectives related to strategic gateways and trade corridors. Importantly, it was also put in place to make sure shippers had an effective, efficient, consistent, and reliable rail transportation system in order to remain competitive and to prosper in those same domestic, continental, and international markets. And it was really the shippers' concerns that forced the government's hand and started the review process. Why did they push so hard to have this review?

The answer is straightforward. While railroaders today generally understand that their long-term success is in large part related to how effectively they respond to their stakeholders' interests, it was a different world only a few years ago. Key players – customers, regulators, provincial and federal legislators, safety boards and shippers – were often presented with take-it-or-leave-it options by the railroads. That attitude harkens back to a different era, and shippers were understandably furious.

I'm more or less outside the political arena these days, but I find it fascinating to watch the current struggle for control of CP. What seems absent in the "struggle" is a thorough critique of what went on in that different era, and whether it is possible or even desirable to try to go back to the future. Customers have been coming out of the woodwork, expressing satisfaction with the direction that CP is going. It is a completely different atmosphere than when I was agriculture minister, where we heard a constant stream of complaints from farmers, shippers, provincial governments and members of Parliament related to railroads operating practices.

Things were pretty heated back then. At one point, in an effort to get Canadian National Railway's perspective and work towards some solutions – or at least understanding – I reached out directly to Hunter Harrison, then CEO of CN and now a potential candidate to be CEO of CP. That call remains unreturned to this day. While a minister not getting his call returned no doubt puts the smile on the face of some, it speaks to a single-minded approach in an environment where collaboration is essential for success. No railroad or chief executive would – or should – get away with thumbing his nose at key stakeholders nowadays.

In fact, after Mr. Harrison left CN that company changed the way it did business. As Keith Creel, the chief operating officer, said in a November 17, 2011 interview: "The whole service review happened to occur when we had a leadership transition. As that report transpired, we started to deal with the questions that came up (via the service review) and started talking to our customers and reflecting. It became apparent for us to adapt and change. Whether or not the government would have ultimately done that or compelled us to do that – we hope we've given them proof they don't need to." In other words, they knew they either changed the way they did business, or the government would be forced to make the changes for them.

Personally, I own no shares in either railroad, do no business with them, and don't know many of the players who will be in attendance when CP shareholders meet and vote on May 17, 2012. My interest is in seeing a strong railroad business in Canada where companies, customers and the regulator work together to achieve their required outcomes. However, my fear is that a debate focused primarily on operating ratios, while failing to consider the impact of management style, will inevitably lead us back to more acrimony, more regulations, and eventually more burdens, less profit and less service.

In today's marketplace, it is critically important to remember what was heard and learned during the railroad review, and it is essential for any railroad to have a leadership group that responds to the Main Street needs of its stakeholders. Meeting those diverse needs is in the interest of the Canadian economy, but ultimately, it is also in the interest of the CP shareholders.

First elected as a Reform Party MP in 1993, Chuck Strahl served in three cabinet posts in Stephen Harper's Conservative government before his retirement from politics in 2011 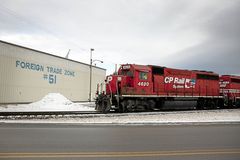