Ottawa has ordered the departure of a Russian diplomat to "send a message" to Moscow as relations between the two countries increasingly fray over Vladimir Putin's efforts to destabilize Ukraine, sources say.

The tensions that led to Canada's asking Russian military attaché Lieutenant-Colonel Yury Bezler to leave within two weeks stem from a standoff between Ottawa and Moscow over recognizing diplomats.

Sources say Canada's move is in response to the Russian government's recent decision to remove a Canadian diplomat from his post in Russia.

And the trigger for this ongoing back-and-forth conflict was an attempt by Russia to add diplomats to its Canadian mission that Ottawa strongly suspected would not be employed as envoys.

Sources familiar with the matter declined to say whether Canada suspected the would-be Russian envoys were spies.

It all began recently when Ottawa denied visa applications for some Russian diplomatic staff. Sources say the Canadian government decided those seeking accreditation as representatives of Moscow "were not who they claimed to be."

Canada felt that Russia wanted to place these employees at its Canadian mission for reasons other than diplomatic representation, sources say.

In retaliation for the spurned visas, Moscow ordered a "relatively low-level" Canadian diplomat in Russia to leave that country.

And Canada in turn responded by asking Lt.-Col. Bezler to pack his bags.

Lt.-Col. Bezler, reached Tuesday night outside an Ottawa bar, would only say "ask your government" when asked why he's leaving. "I like Canada," he said.

It's not the first time the Conservative government has kicked out Russian diplomats.

In 2012, Ottawa sent more than one Russian envoy packing after a Canadian naval intelligence officer confessed to spying for Moscow.

The departure of Lt.-Col. Bezler comes as tensions with Moscow mount over what Ottawa calls "agent provocateurs" fomenting unrest in eastern Ukraine‎.

It follows tough words that Foreign Affairs Minister John Baird directed at Moscow Monday evening on unrest in regions of eastern Ukraine. There are fears of a repeat of Moscow's seizure of Crimea now that pro-Russian activists have seized government buildings in Donetsk and declared the area independent and vowed to hold a referendum on the region's status.

The Department of Foreign Affairs refused to offer any explanation on whether the departure is related to Ukraine.

"We do not comment on the status of diplomatic personnel," department spokeswoman Beatrice Fenelon said.

"Canada strongly condemns the agents provocateurs that are fomenting unrest in the three Ukrainian oblasts of Kharkiv, Donetsk and Luhansk," the Foreign Affairs Minister said in a statement.

"Canada calls for calm and for Ukraine's territorial integrity to be respected. Russia must not interfere in the affairs of a sovereign state," he continued.

"If this pattern persists, Russia will continue to face increased isolation from the international community and suffer further serious consequences as a result of its actions."

Relations between Russia and Canada have become increasingly strained, as Canada emerged as a particularly vocal opponent of Russia's actions in Ukraine. Last month, Alexander Romanovich, the deputy chairman of the foreign affairs committee in Russia's parliament said he believes Canada has no legitimate reason to get involved in Ukraine's affairs because it's so far away from the region, and argued that Ottawa was being unnecessarily provocative in its conduct on the file.

Since early March, Canada has recalled its ambassador to Russia and placed economic sanctions and travel bans on a number of Russian officials and one Russian bank. Russia, in turn, has banned 13 Canadians from travelling to Russia, including politicians, civil servants and the head of the Ukrainian-Canadian Congress. Ottawa also cancelled government representation at the Paralympic Games in Sochi, halted bilateral activities between the Canadian and Russian armed forces, suspended its participation in the Canada-Russia Intergovernmental Economic Commission, and joined other G7 nations in refusing to participate in the planned G8 summit in Sochi.

"Our relations with Canada are not just unconstructive, they're poor… Canada stopped military relations with Russia, and so one or two people who were over there teaching got sent home. It's ridiculous," Mr. Romanovich told The Globe and Mail in late March. "These sanctions are a way of waging war without weapons. To use sanctions is to be belligerent." 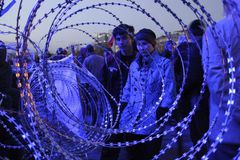