Some years ago, I accompanied then-Saskatchewan premier Roy Romanow on a round of meetings with analysts from bond rating companies. It was early in his term. The toughest decisions to deal with the financial wreckage left by the previous "conservative" government had been made by Romanow, finance minister Ed Tchorzowski and a deeply-involved and empowered cabinet and caucus, who had been brought in on a line-by-line discussion about budgets (very unusual, alas, in these days of hyper-centralized government).

The job now was to see the plan through, keep the people of the province onside, and have nothing else go wrong. One of the things that could go wrong was adverse judgments by bond rating companies. If they didn't believe our plan was going to work, they could vote on it by downgrading our credit rating. This was not a small thing in the early years of the Romanow government. The province of Saskatchewan had already been the object of multiple credit downgrades, to the point where a distressingly declining number of pension funds and other large-scale lenders were even allowed to consider buying our bonds.

So it was important to make sure the bond rating companies liked us. Which required a very credible and carefully-presented series of briefings by our premier. Which he handled with his usual aplomb.

In the event, the Saskatchewan NDP's fiscal policies worked; the finances of the province healed; our government earned a string of credit upgrades; in due course the budget went into surplus. The last time I attended a bond meeting, some of the people involved in our debt issues complained that we weren't borrowing enough - "there isn't enough product." Excellent!

But back to that first meeting. We found ourselves in a slightly shabby boardroom in an office tower in Toronto. Romanow made his pitch to an audience composed mostly of young men - bond rating analysts, may the good lord bless them all, or so we were thinking at the time. They listened silently to our premier and senior finance officials. And then one put up his hand, rubbed his chin, and got to the first question: "Aren't you people spending way too much on health care?"

And furthermore, with all due respect to early-career bond analysts, may the good lord bless them all, that was a question that properly belonged to the government of Saskatchewan, to its legislature, and to the people of the province voting in an election. Which is why I have never met anyone involved in any detail in the financial work-out of the province of Saskatchewan in the 1990s who did not become a "budget hawk." What we lived through for most the term of that government was the reality that beyond a certain threshold, every dollar borrowed from the markets to finance day-to-day spending by a provincial government is a step towards the disempowerment of the public and its legislature. Over-dependence on debt hands the keys of public policy to lenders and to their advisers.

Small wonder then that the press in Ireland is full of lament for the loss of that country's independence - so expensively won after so many centuries of oppression and struggle.

Ireland is negotiating a potential €80-billion bailout that will socialize a decade of reckless irresponsibility in its private-sector banking and real-estate markets. Ireland's public sector - its social services, education, health care and infrastructure - is therefore going into trusteeship to pay for the incompetence and greed of its private sector. A key trustee will be the former colonial oppressor, Britain. Another will be Germany. So there will be King and Kaiser in Ireland's future after all.

This is what happens when a nation takes the advice to "run like a business" a little too exuberantly. It is what the conservative agenda looks like, played out to its end.

These are the real stakes between those who work for moderate, prudent, incremental progressive government, moving forward within its means in the public interest, and the other side - the mouthpieces for greed and reckless irresponsibility. The shills and charlatans of the populist right, and those who fund them.

Ireland gave itself to them and is paying the price - another chapter in its national tragedy. The rest of us would do well to learn from this. It's a lesson we have danced close to in a number of Canadian jurisdictions already.

Irish PM is forced to agree to dissolve government
November 22, 2010 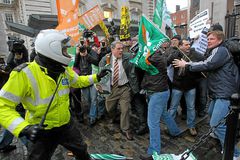 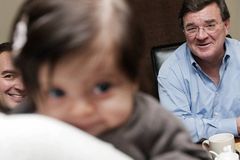 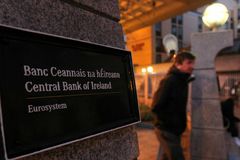 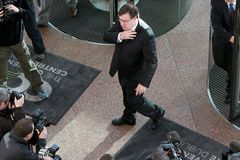 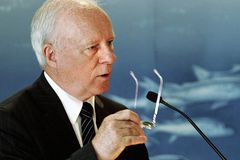 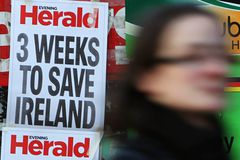 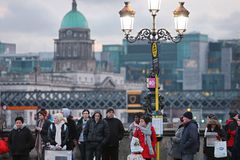