A federal minister paying top dollar for a glass of nutritious orange juice at a luxe hotel she moved to so she could smoke is not only great irony. It may have briefly been the most hazardous episode yet to the political health of the Conservatives.

The London smoking spree was so hard to defend the Tories tossed the "brazen it out" playbook with haste. Now of course, the story will exit the news, and likely pass from memory. But sloppy accounting, Muskoka patronage, and holiday helicopter rides blur the image of a government you thought was different. As determined as Stephen Harper is to avoid it, his government is accumulating scar tissue from self-inflicted wounds. He knows from his own happy experience that too many of these stories and voters start to shift their gaze, and look for an alternative. Maybe even consider choices one never thought they would.

The Prime Minister is shoulder-to-the-wheel on some big policy changes, as Saturday's analysis by John Ibbitson chronicled. He faces plenty of resistance on the substance. For some he is too timid, for others his direction is a disaster. But hardly anyone sees him as a man just lazing about, or living high on the public's dime. He's got enough reason to be awake at night, without having to worry about ministers making the kind of decisions that Bev Oda did. The Tories only good moments with the Oda story came when it was obscured by even more outrageous sounding spending by the head of the Old Port of Montreal.

As beset all governments, there've been a string of problems over the years Harper has been in office, but generally with little effect. This was because people wanted to give the new government a chance to prove itself, because the Liberal brand still made many see red – and because Stéphane Dion and Michael Ignatieff were unconvincing understudies.

The selection of Tom Mulcair has reset the clock. His lead in Quebec is huge, and plausibly durable. He's a known entity, leading a party that many Quebeckers think shares their social values and economic orientation. He's like the Bloc Québécois without separatism, something lots of Quebeckers have been yearning for.

If his numbers hold in Quebec, the problem faced by the Liberal Party goes from bad to dire. And not only because of the seats they would otherwise hope to win in Quebec.

The bigger challenge will be to find a place for themselves in the conversation that happens in the rest of the country. Some die-hard Liberal partisans believe the vast majority of Canadians would never consider voting NDP. This is, to put it kindly, irrational exuberance.

If people get fed up with incumbents, they do things you wouldn't expect to make a change happen. Moreover, the conservatively-dressed, cabinet-experienced, lectern-using Mulcair is wearing a big "I'm a centrist" badge everywhere he goes. He's campaigning like a man who knows his base has nowhere else to go – and that most of the new votes available have to come from the Liberal Party. Sort of like Stephen Harper does.

For several elections, scaring progressive voters into line has been a pretty key part of Liberal Party strategy. In so doing, the party drifted away from the centre and saw blue Liberals drift to a less threatening Harper. Now an NDP with more money, more seats, a bigger share of voice, and higher standing in the polls threatens to beat the Grits at their own game. More voters are now looking about, which has upped the stakes: The choices the Liberals make over the next few months may alter the course of Canadian politics, for decades to come. 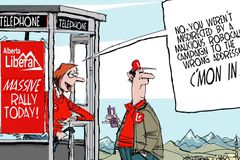 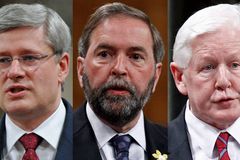 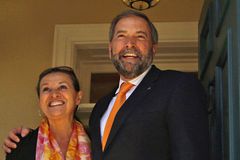 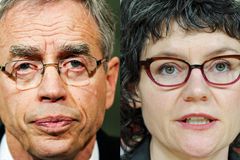