A subsidiary of a Chinese state-owned company currently seeking the Trudeau government's approval to buy Canada's third-largest construction firm has been blacklisted in Bangladesh for allegedly offering bribes to government officials.

It is the latest in a string of corruption and bribery allegations made against companies operated by China Communications Construction Co. (CCCC), which recently bid $1.5-billion to buy 100 per cent of Toronto-based Aecon Group.

The controversial transaction – opposed by most players in the Canadian construction industry – is going through an Investment Canada "net-benefit test" to determine if the takeover would be detrimental to this country's national interest. China Communications Construction Co. is 63 per cent owned by the Chinese government.

In January, CCCC subsidiary China Harbour Engineering Company, was banned from government contracts in Bangladesh after officials in Dhaka discovered it had allegedly offered bribes to officials.

Bangladeshi Finance Minister Abul Maal Abdul Muhith announced the ban when speaking to reporters and said this would prevent the firm from getting work in his country. China Harbour had been in negotiations to expand a major highway. "The Chinese company openly offered the bribe," Mr. Muhith said, according to the Bangladesh Daily Star.

The construction industry is regularly ranked among the globe's worst industries for corruption. Transparency International, the world's most prominent anti-corruption organization, has ranked public works contracts and construction as the most likely out of 19 industry sectors to find bribes being paid. It has also said that Chinese firms are among those most likely to pay bribes.

Aecon, the construction company currently led by founder and CEO John Beck, said the takeover by a Chinese state-owned firm will not affect the firm's conduct.

"Aecon's unblemished record of adhering to industry best practices, and Canadian law, will not change," the company said in a statement.

CCCC, in particular, has accumulated a lengthy record of accusations.

In 2015, two staff from its China Roads and Bridge Corp. subsidiary were arrested for alleged corruption in Kenya, the country's Daily Nation newspaper reported. Also in 2015, China Harbour Engineering was accused of bribing a former Sri Lankan president.

In 2012, China's Hebei Port Group chairman Huang Jianhua was sentenced to death for taking bribes and helping China Communications Construction Co. win a bid for a construction project at Huanghua Port Wharf in China. According to Caijing, an independent Beijing magazine, CCCC is alleged to have given Mr. Huang a house.

In 2011, the Associated Press reported that a Bangladeshi court sentenced the son of a former prime minister to six years in jail for laundering money taken as bribes from companies including China Harbour Engineering.

The Chinese construction giant was banned from building any projects for the World Bank for eight years – ending in 2017 – after one of its two founding companies was found to have engaged in bid-rigging and collusion.

In all these incidents, CCCC or its subsidiaries have denied the allegations.

Transparency International concluded in a 2016 study of emerging-market companies by saying that Chinese firms were among the least transparent when it came to policies that helped fight corruption.

"The very weak Chinese results stem from weak or non-existent anti-corruption policies and procedures, or a clear failure to disclose them in line with international practice," the watchdog said. It awarded China Communications Construction Co. a mark of 3.3 out of 10 after surveying its anti-corruption programs, its organizational transparency and the extent to which it disclosed country-by-country reporting on its operations.

Thompson University Professor Robert Hanlon, an expert at Transparency International's anti-corruption research network, said CCCC does have a bad record of corruption and bribery with its infrastructure projects in the developing world, but he does not believe it would try to bribe anyone in Canada.

"Chinese firms that come into Canada are very good at learning Canadian laws and adapting very quickly. This is part of their strategy of being competitive locally," He told The Globe and Mail on Tuesday.

However, Prof. Hanlon said the "red flag" for Canada is that CCCC has easy access to Chinese government money at below market rates, which would help them underprice Canadian construction rivals.

"It is similar to a Crown corporation, where you have a large state-backed enterprise … and they can outcompete Canadian firms just on price points," he said.

Conservative MP Tony Clement, a former industry minister who once oversaw the Investment Review Process, said he has deep reservations about turning over Aecon to a Chinese state-owned enterprise that has such a long record of corruption. 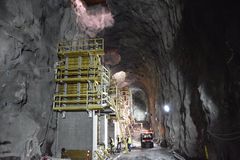