When the waters of Lake Ontario began to rise around Toronto Islands in May, Julian Ganton wasn't worried.

"At first, I was very hopeful, because every season the water does go up and down. It's the natural cycle," he said.

"But once it started flooding almost close to the road, the hope starts to fade a little bit."

Mr. Ganton, a lifelong islander who owns a paddle-boarding business there, has never seen the water this high.

He isn't the only one who has begun to worry. When the islands were closed to visitors at the beginning of May, businesses such as Mr. Ganton's were left without the thousands of tourists who would normally begin visiting the islands. The ferries are providing passage to anyone who has a reservation with an island business, but not many people knew this, he said.

"When I realized that it was more serious, near the end of May, I upped my marketing like crazy because I somehow had to get the word out there that people were allowed to come over," he said. "And it worked, to an extent."

During June of any other year, Mr. Ganton said he would have up to 100 groups of people coming to his business every week, whether for a paddle-boarding tour or to rent equipment. This season, he said, that number is closer to 10.

"I've been sort of shifting my tours to talking about the flood and its natural cycles and bringing people to some of the flooded areas," Mr. Ganton said. "It's not a good thing, but it's quite a unique thing that is interesting, especially if you're not familiar with the island or the Great Lakes."

Shawnda Walker, director of marketing for Centreville Amusement Park, said the numbers aren't clear yet on how much the park has lost.

"We've definitely lost a lot of money. It's already been one third of our season, and we're only open for a very short time," Ms. Walker said. In June, the park might see up to 10,000 people on a weekday.

Centreville found out about the closing of the islands three days before its opening date, which was the first Saturday in May.

While the water is nowhere near as high as it was in May, sandbags still line the roads and shores of Ward's Island, and at the amusement park, a portion of the train tracks, as well as several benches and a bridge, are still underwater.

Ms. Walker said they had hoped to be able to announce the reopening on June 20, but the water was still too high.

"We'd like to be able to announce something soon … but until it hits that level, we can't," she said. "Once the city says 'go,' we can open it within 48 hours."

Ralph McQuinn, the owner and operator of Toronto Harbour Water Taxi, would be ready to go even sooner than that. He has two brand-new boats sitting in the docks that have yet to see the traffic June normally brings for his business.

"I've got everything in place. I'm ready," Mr. McQuinn said. He has four people working for him now, when normally he would have 10. But the other six would come back to work at a moment's notice.

Mr. McQuinn said that, although his business has lost a lot from the islands' closing, he remains optimistic about the rest of the season. He knows his isn't the only business that is waiting for good news once the water is low enough.

"We're all gonna get together and get things going," he said. "That island will open up, then we're going to get back to work, and I still think this summer is going to be a great summer."

Luc Cote of Tiki Taxi, another water-taxi company, said he is cautiously optimistic that the islands could be open soon.

"We've noticed a lot of activity," Mr. Cote said of Centre Island, where the amusement park is. He's seen washrooms being cleaned, grass being cut, and other signs that, just like the taxi companies, the park is getting ready for business. "You don't clean a bathroom now for July 31st," he said.

Mr. Cote's business normally picks up around the May long weekend, when it got a notice from the city about the closing. "They cashed our cheque for the permits, and then told us the next day that permits were suspended," he said.

His first thought was of his staff. He told his employees he would do his best to keep them busy part-time. Mr. Cote wanted to keep as many of them on as possible so that if the islands are opened up, Tiki Taxi would be ready.

Like Mr. McQuinn, Mr. Cote has two brand-new boats for the summer. He estimates that, so far, his business has lost around $70,000. But he thinks this year's flooding may have a positive effect on islands' businesses after all the media attention the flooding has received.

"It's incredible how many people don't even know that there's an island," he said. "So now that people's curiosity is piqued … I think it may end up having a good effect in the long term." 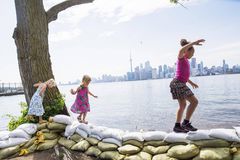 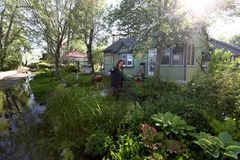 Flooding threatens more than half of buildings on Toronto Islands
May 19, 2017
Follow us on Twitter @globeandmail Opens in a new window
Report an error Editorial code of conduct
Due to technical reasons, we have temporarily removed commenting from our articles. We hope to have this fixed soon. Thank you for your patience. If you are looking to give feedback on our new site, please send it along to feedback@globeandmail.com. If you want to write a letter to the editor, please forward to letters@globeandmail.com.
Comments