The 135th Canadian National Exhibition opens next week bringing with it a rush of memories for Canadians of all ages. The Ex has more than a century of history behind it, so there are plenty of nostalgic highs and cringe-worthy lows to reminisce over. Here are some of the moments we love to remember – and a few we'd rather forget – from the history of the CNE. 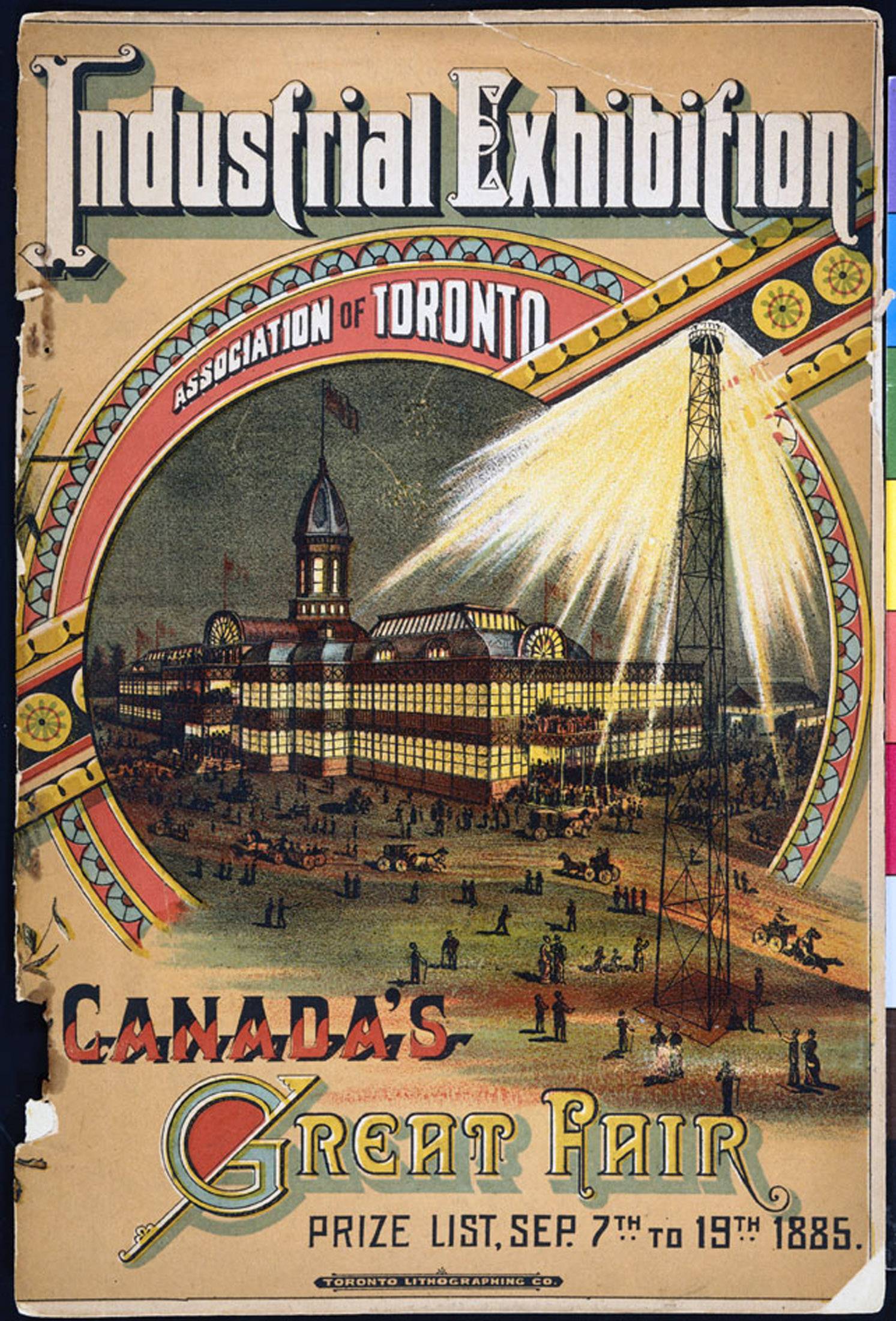 Let there be light!

The first exhibition was held in 1879, then called the Toronto Industrial Exhibition, as a way to encourage and celebrate innovation in agriculture, technology, manufacturing and the arts. Although the new inventions at the modern day iteration seems to take place exclusively in the food building, once upon a time the Ex was a bastion of innovation. In 1882, the CNE became the first permanent fairground in the world to be lit using electricity, and in 1884 the nation’s first electric train – the second in the world – was unveiled at the Ex. 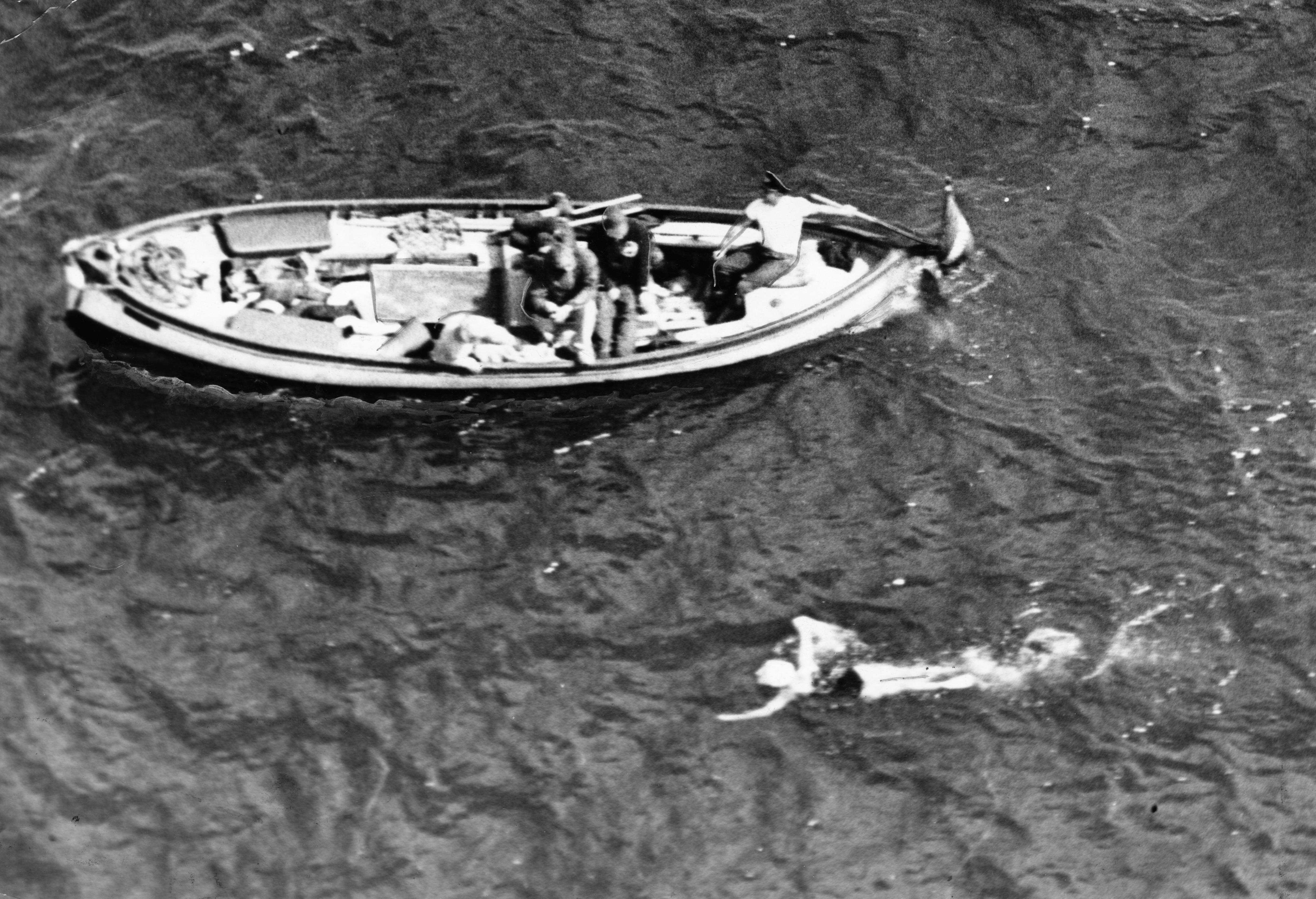 The Bell of the ball

In 1954, the CNE offered an American long distance swimmer $10,000 if he could swim across Lake Ontario – a feat never before achieved. To the surprise of many, the American swimmer failed, but after nearly 21 hours of straight swimming, 16-year-old Canadian Marilyn Bell became the first person to ever swim across the lake. Ms. Bell had taken on the challenge without any promise of a prize, feeling the Ex should have made the offer to Canadian swimmers. The CNE decided to give the cash to Ms. Bell, to the joy of the Toronto community that had cheered her along in the historic swim. 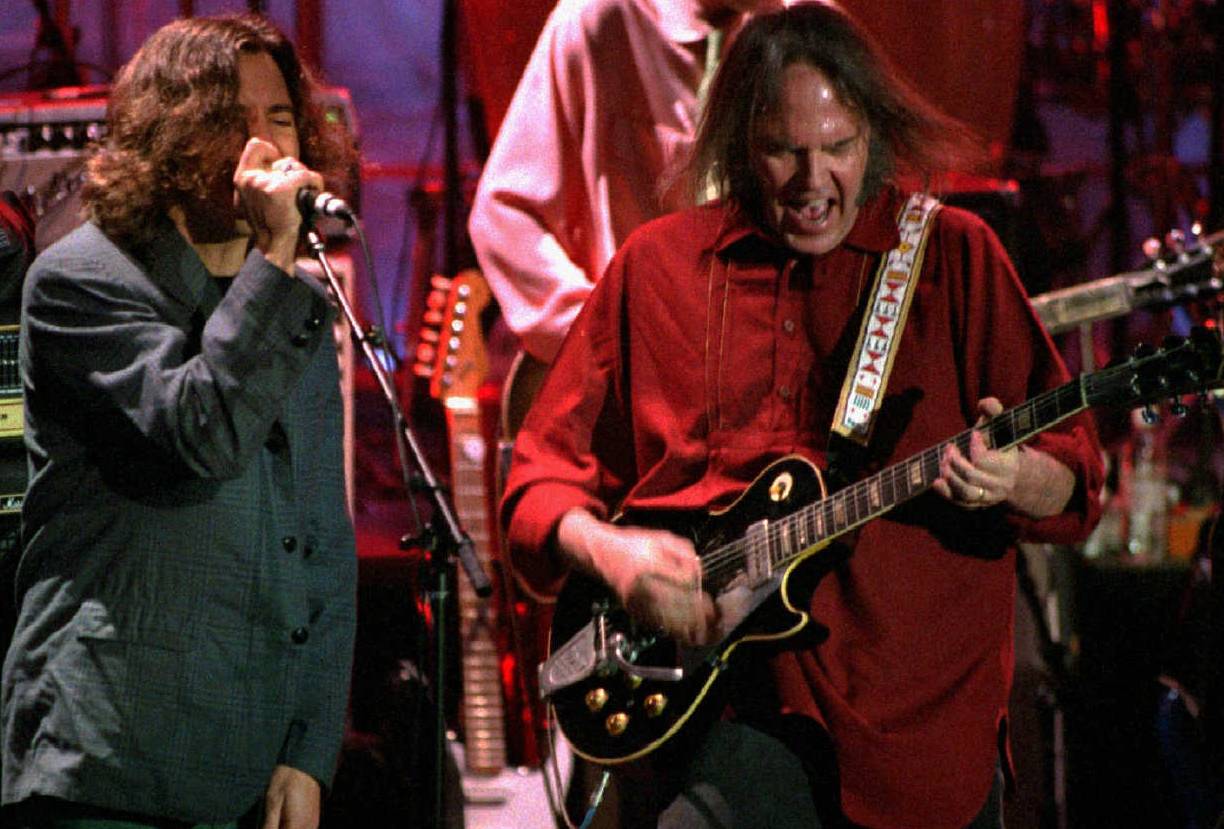 Eddie Vedder and Neil Young at the Rock and Roll Hall of Fame in 1995. (Joe Tabacca/AP)

Pearl Jam frontman Eddie Vedder once shared a ferris wheel ride at the Ex with Canadian rock legend Neil Young. Though the CNE’s grandstand hosted many of the world’s greatest performers before it was demolished in 1999 – ranging from The Beach Boys to Tina Turner to Johnny Cash – there’s something quitessential about the image of Mr. Vedder and Mr. Young taking in the sights of the fairgrounds from atop the big wheel. Pearl Jam opened for Neil Young at the Grandstand on August 18, 1993 but Mr. Vedder didn’t share the story of the ferris wheel ride until 2009, while performing covers of Mr. Young’s songs at a Molson Amphitheatre Concert. 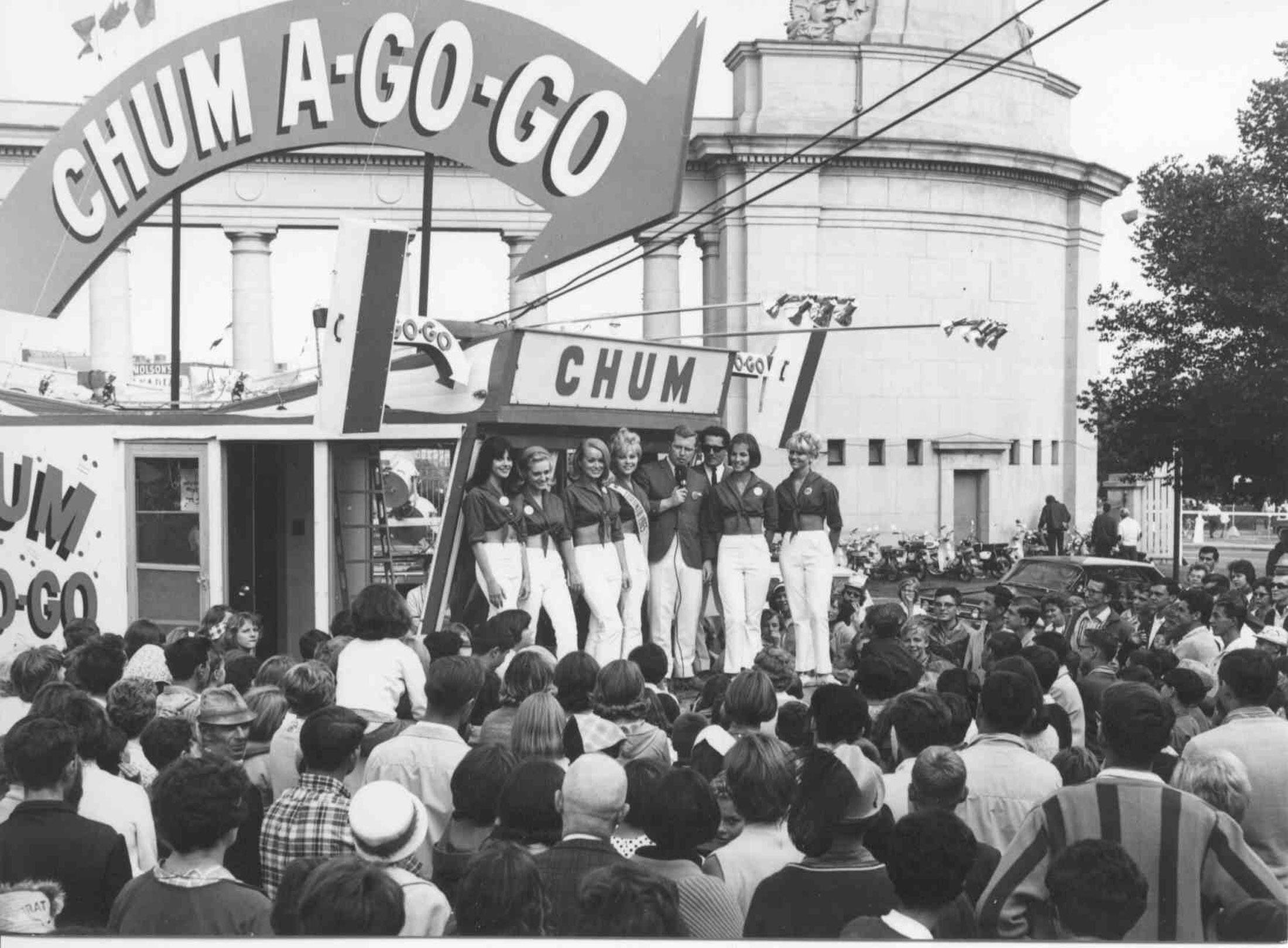 Jay Nelson and the CHUMChicks at the CNE. (Handout)

Although television sets had started to trickle up from the United States in the 30s – and Eaton’s lays claim to the first set available for the public to gander at – many Canadians had their first glimpse of a real, live television set at the CNE in 1939 in a demonstration billed as “science’s most modern miracle.” Along with the TV, many Canadians saw a telephone (in 1888) and a radio (in 1920) for the first time in demonstrations at the Ex. The first example of a radio at the CNE was an exhibit in the Railway Building of a transmitter. Music was played on a phonograph and broadcast over the transmitter to a receiving set in the Horticultural Building. 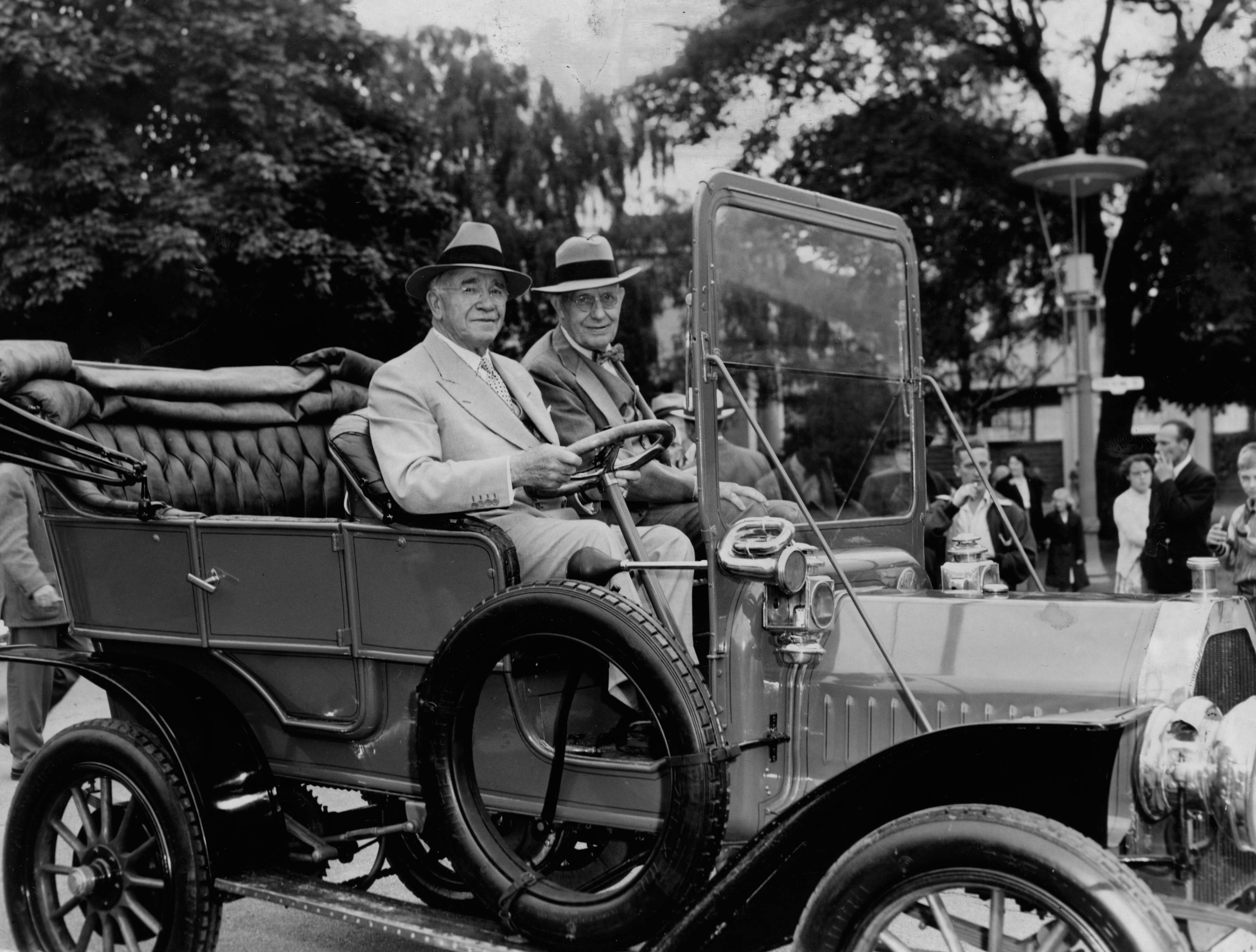 R.S. McLaughlin, chairman of the board of General, and engineer Charles F. Kettering, drive around the CNE in 1954 in a 1908 McLaughlin-Buick. (Turofsky)

It wasn’t just household appliances and communication devices that drew crowds to the Ex over the years; from the early days until just a few decades ago, the CNE was the only place in the country where you could preview the latest in car designs. Automobiles and ‘horseless carriages’ were displayed as early as 1899, the first Volkswagen cars in the country were seen at the CNE in 1952 and 1980 brought fairgoers a glimpse of a Lamborghini – a car that’s still rare sight to this day. 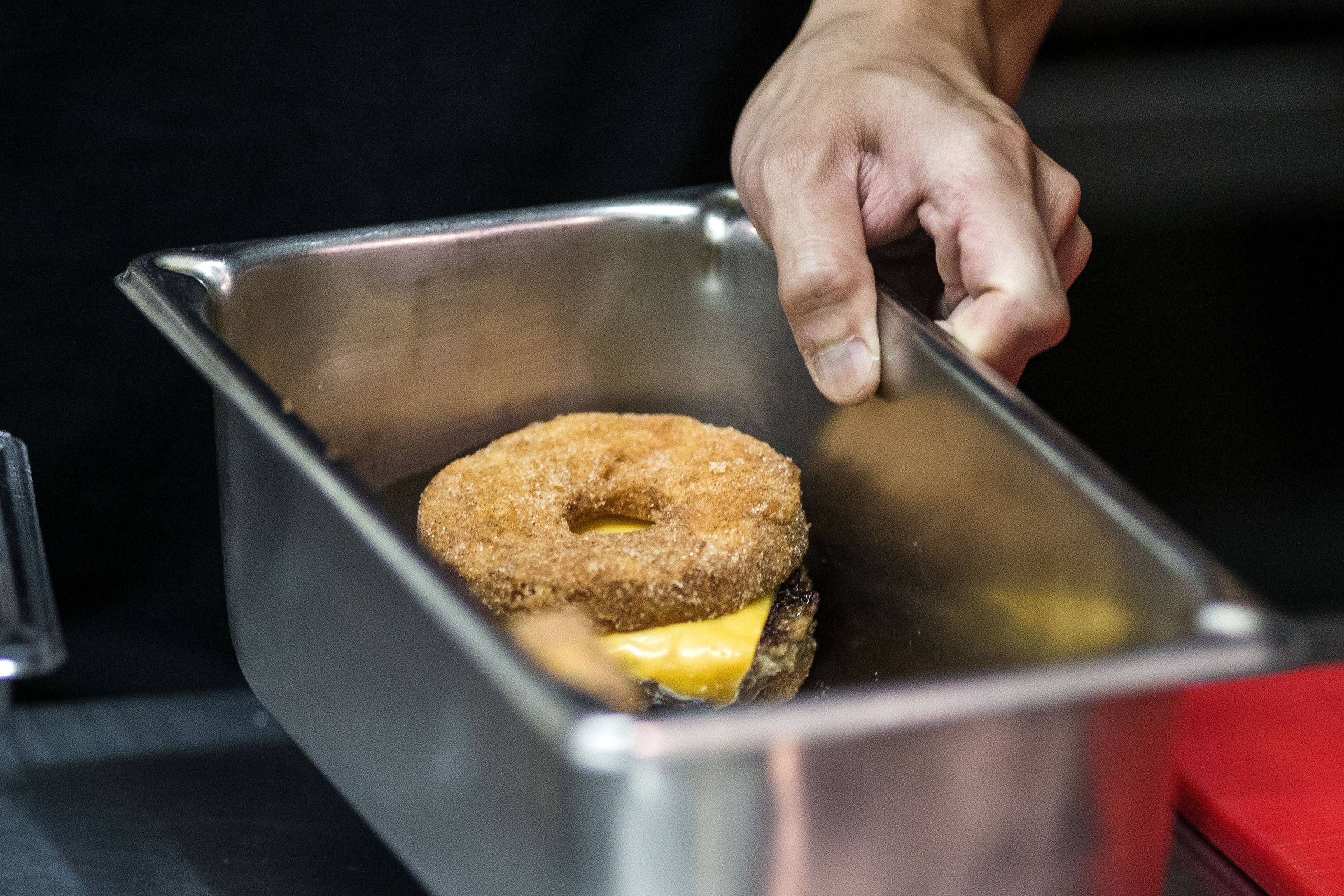 (Chris Young for The Globe and Mail)

If the idea of a cronut burger – a cheeseburger stacked on a hybrid croissant-doughnut bun – wasn’t enough to make you sick, last year’s unfortunate incident of contaminated condiments did. More than 200 fairgoers became ill after eating cronut burgers topped with a dallop of maple bacon jam that public health officials later determined was contaminated with Staphylococcus aureus, a bacterial toxin. All of the patrons recovered after a week or two, but before the end of the exhibition two more food outlets were shut down over food preparation issues. This year, you might want to stick to the more traditional fair fare, like deep-fried butter. 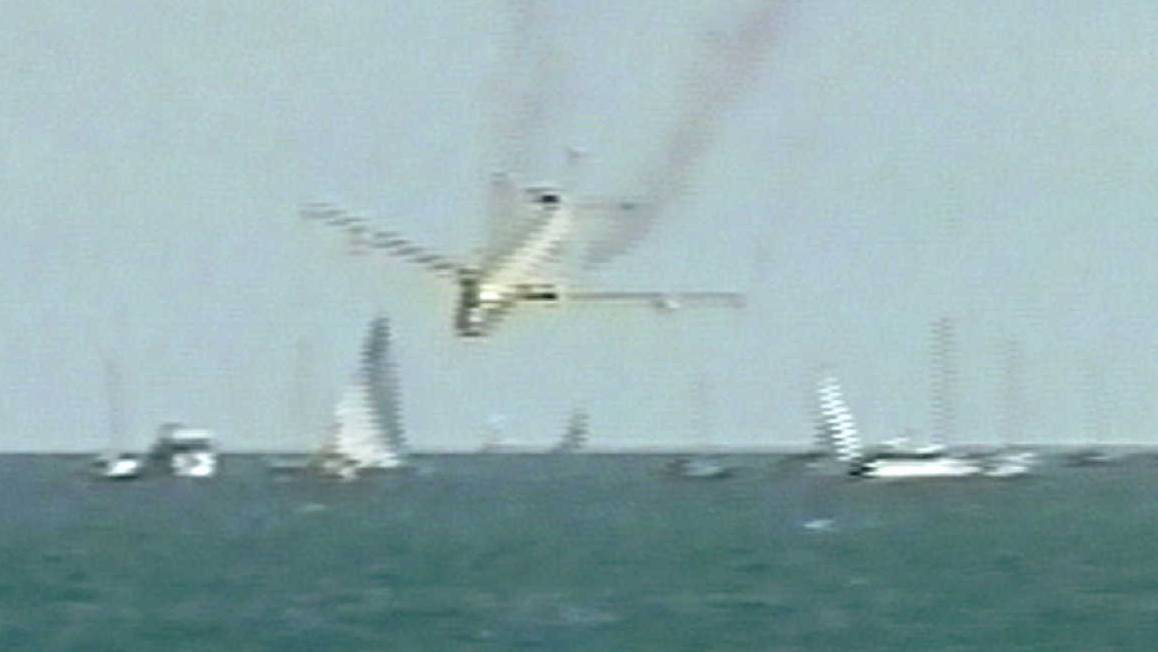 The CNE air show that caps off the end of the fair has long been one of the biggest spectacles on offer at the Ex, first taking off in 1949. But the risk associated with stunt aviation have led to tragedy in the past. In 1989, two Canadian Forces Snowbirds collided in midair, killing one pilot while the other safely ejected from his aircraft. Then in 1995, a Royal Air Force Nimrod stalled during a low altitude turn and crashed into Lake Ontario, killing all seven crew members. 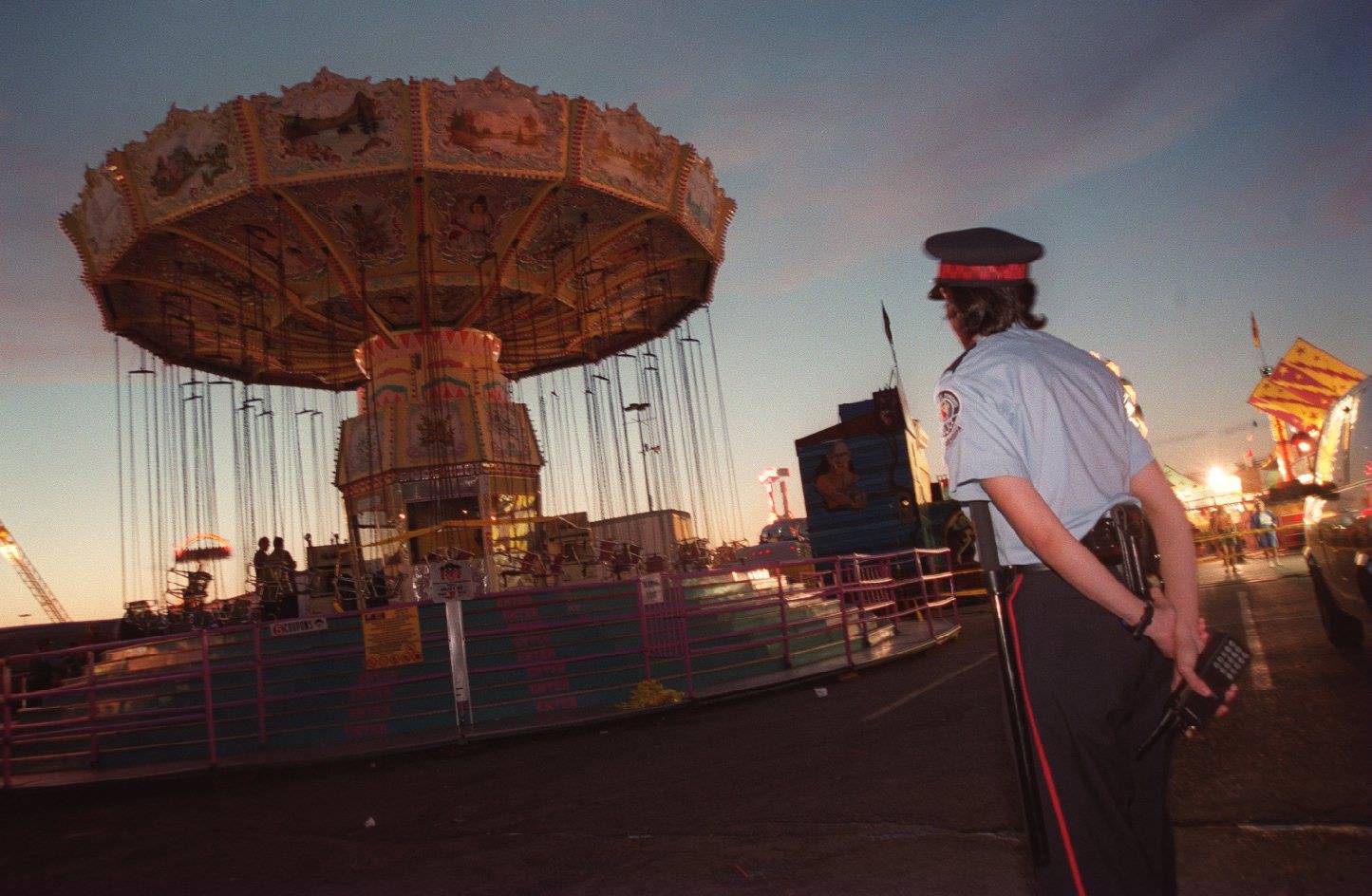 A police officer stands guard beside ride that was shut down after accident at the CNE in 1999. (Peter Tym/The Globe and Mail)

The midway is traditionally the place for family fun at the Ex, with classic rides like the ferris wheel, the zipper and the scrambler offering thrills to patrons of all ages. But over the years it hasn’t always been a smooth ride. In 1999, more than two dozen children were hurt – with ailments ranging from cuts and bruises to head and neck injuries – after the seats on the Wave Swinger ride suddenly dropped two and a half metres, landing on the platform below. In 2004, the Zipper ride closed overnight after an 11-year-old boy tumbled out of the ride into the arms of safety attendants. The door on his compartment had not been properly secured, but luckily the lad escaped with just a chipped tooth and a scratched chin. Then in 2004, more than 20 riders were rattled but largely uninjured when the G-Force ride suddenly stopped midair and jolted downward. 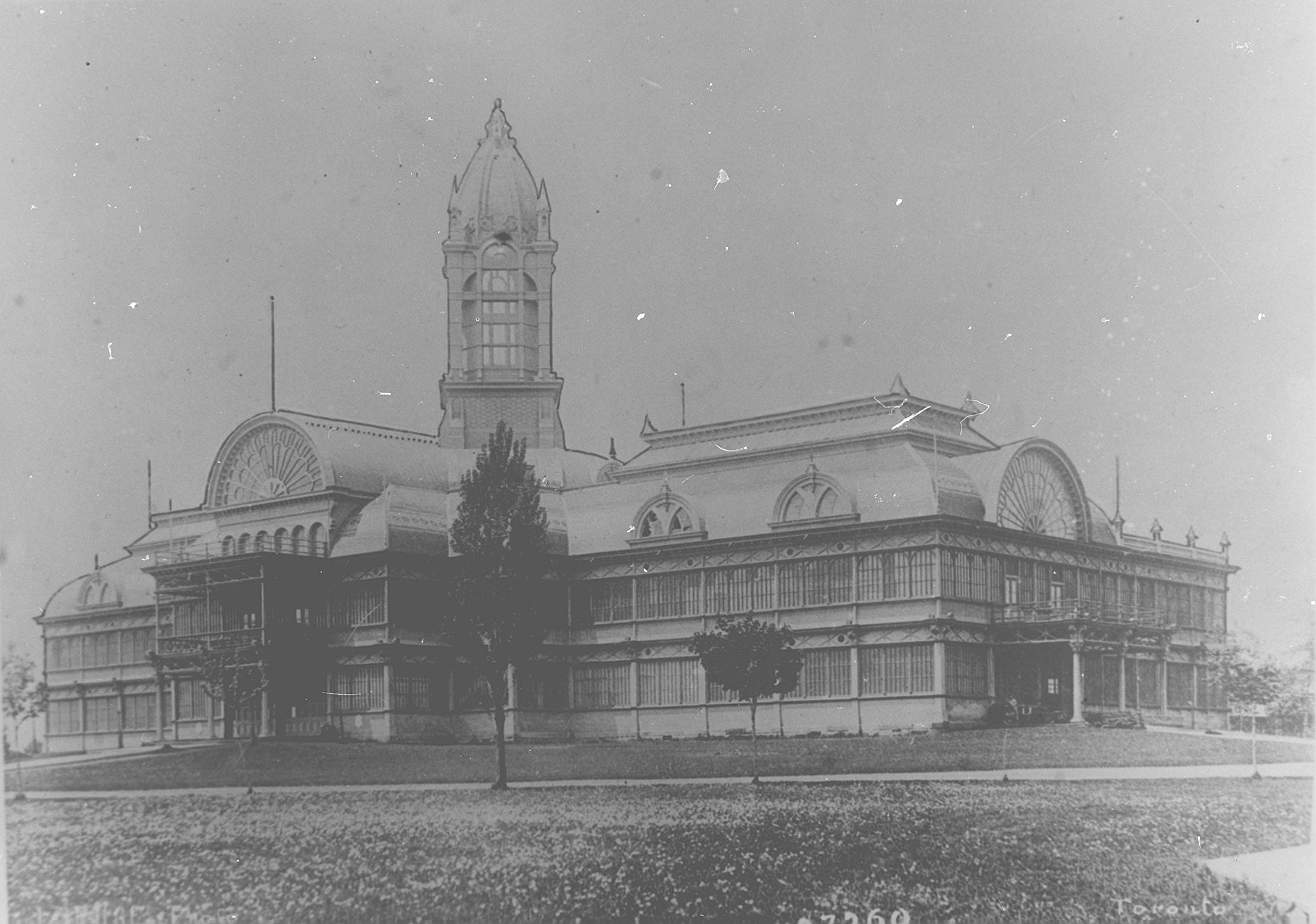 The Crystal Palace at the Ex before the 1906 fire.

The Crystal Palace in flames

The Crystal Palace – a replica of the building originally built for London, England’s 1851 Exhibition – was long the icon of the CNE. The stunning iron and glass building housed new products and its image was used on promotional material for the exhibition. But in October, 1906, it burned to the ground overnight. It was replaced by the Horticulture Building, which now houses the controversial Muzik nightclub. When the Crystal Palace went up in flames, a piece of Canadian and fair history was lost forever. 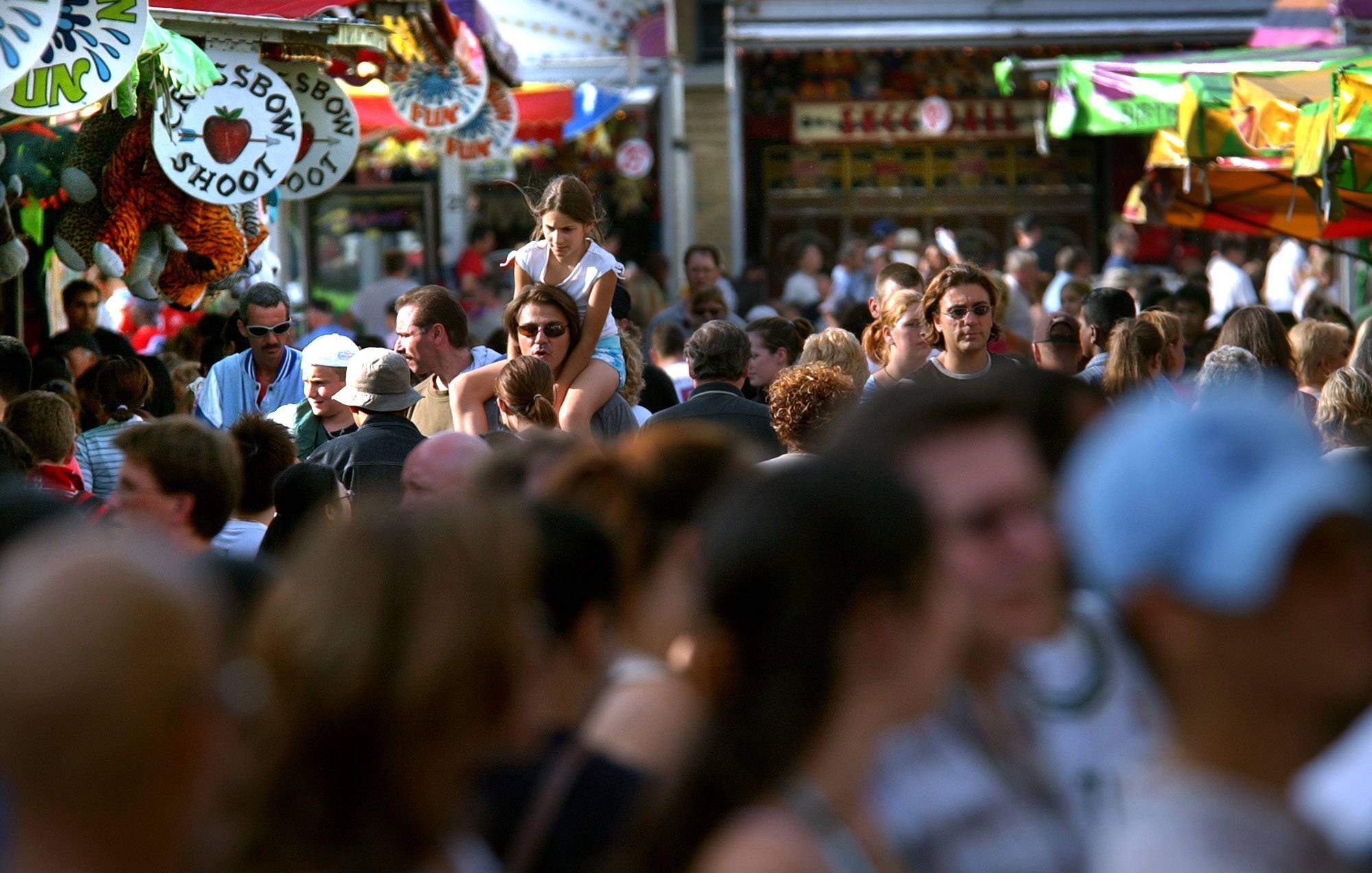 Blackout puts Ex in the red

Most Ontarians will remember the massive blackout the covered much of the province in August, 2003, but many might have forgotten the blow the lack of power took to the CNE’s finances. No power means no rides, no food, no CNE - so the exhibition had to delay its opening by four days. Despite higher than normal attendance once the fun started, the CNE had to swallow a $1.2-million revenue shortfall as a result of the delay.