It's dark, it's cramped, it's suffocating and it's not usually the best place to hold a theatre production.

But for one playwright, a shipping container was the ideal stage for her play exploring the challenges and determination of refugees who make terrifying journeys in search of a better life.

Clare Bayley's The Container, performed inside a 20-foot shipping container that can seat less than two dozen people, aims to force the audience to confront the human stories behind statistics about refugees and human smuggling by squeezing them right into actors' space.

The play follows five illegal migrants on the last leg of a strenuous journey to England and their dealings with a mysterious Agent they've paid to smuggle them across Europe. It was first presented at the 2007 Edinburgh Festival Fringe and went on to win several awards.

"The audience (is)…not sitting on the outside and looking at the characters and judging them. They're really going on that journey with them," said Ms. Bayley, a U.K. playwright whose provocative play made its Canadian premiere last week in Toronto at SummerWorks Performance Festival. Directed by Zachary Florence (Gwen Powers) and starring Bola Aiyeola ('Da Kink in My Hair) and Lara Arabian (Hallaj), the play runs until Aug. 17.

When she saw the debate surrounding an influx of refugees playing out in England several years ago, Ms. Bayley felt there was too much emphasis on numbers: how many were coming in, how much it cost the country, how many entered illegally. She wrote The Container in an attempt to balance the conversation.

Sabrina Bandali, a lawyer and producer of the play's SummerWorks production, felt the same disconnect from human realities with Canada's responses to refugees entering the country, such as the health-care cuts for failed claimants and refugees from countries deemed safe by the government. A federal court ruled last month that policy was unconstitutional and a form of "cruel and unusual treatment."

"We tend to wring our hands and worry about what happens when people get here," Ms. Bandali said. "We don't spend a lot of time thinking about the experience of making the journey."

She said the play doesn't aim to sway people to a particular side of the debate, but present the audience a complex depiction of real refugees and what motivates them to leave their homes.

"The characters are strong, resilient, clever people faced with impossible odds," Ms. Bandali said. "(They) are not angels, but they're not necessarily villains either."

A few weeks ahead of opening night, The Container's cast and crew met with refugees at Romero House, an organization that offers housing and support to refugees in Toronto, to get a better sense of their experiences and emotions.

They heard from Ilamaran Nagarasa, a journalist who arrived in Canada from Sri Lanka on a boat with 75 other asylum seekers in 2009 after facing death threats for reporting on the country's deadly civil war. The incident made headlines at the time.

"While the storm was happening, the Hindus and the Christians, we were praying together," he said. "That kind of real human spirit is needed in the world."

Ms. Arabian, who plays an Afghan girls' teacher on the run for her life, said her own Armenian grandparents fled to Syria and Lebanon to escape persecution in Turkey.

"We don't hear these stories enough and yet in Toronto they are everywhere," she said.

Theatre Review
Antigone and the elusive ghosts of justice
August 11, 2014 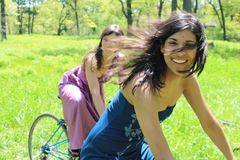