While sitting in a circle around a bonfire in Peterhead Inlet, Nunavut resident Phyllis Martee, 17, said it was the first time she heard about reconciliation. Immediately, after returning home to Baker Lake – a small northern community located west of Hudson Bay – she told her younger brother about the word and its meaning.

"He was surprised when I told them what I learned," she said.

Ms. Martee was part of a group of 30 teens from Nunavut and Ontario who spent eight days, half in Iqaluit and half in Toronto having both formal and informal teachings about reconciliation as part of the Junior Economic Club of Canada's North-South exchange.

These experiences were used to help develop business ideas that tackled three issues affecting Indigenous communities: food security, reconciliation and mental health. Then in small teams, the students pitched their ideas in a Dragons' Den-style competition, where they were judged by business and community leaders and government officials, including Nunavut Premier Peter Taptuna, Inuit leader Natan Obed and Mitzie Hunter, Ontario's Minister of Education.

"The main goal of the program was to allow these students to meet one another and learn from one another but also to create and innovate together," said Economic Club president and CEO Rhiannon Traill. "They are creating and thinking about these problems and really feeling empowered to come up with their own ideas as to how their generation would tackle these things going forward."

The students pitched their business idea for a chance at winning a grand prize of $13,000.

As part of the exchange, the students were taught about Canada's colonial history and the different cultures in the North and South, as well as business and personal finance skills.

During the first half of the trip in Nunavut, the youth watched as a seal hunter carefully opened up a seal and pulled out the different parts, explaining the importance of each to the animal and to humans, and saying that every bit would be harvested.

The teens from Nunavut already witnessed the great care and respect shown to seals in Inuit culture, but for many of the youth from Ontario it changed the way they understood the hunt, which had been heavily shaped by an anti-seal hunt campaign. For 17-year-old Ryan Whitcher, the demonstration inspired his business pitch, which would focus on traditional Inuit cooking and food.

Mr. Whitcher met his partner Owen Keenainak, 16, from Taloyoak, Nunavut while setting up a 10-person tent in Peterhead Inlet.

"We just motioned and understood each other without saying too much," he said. "When the tent was finished, I just knew that he was going to be the right partner for me and so I asked him and he said he had been thinking the exact same thing."

The two won a $7,000 scholarship after placing second in the competition for their Inuit Eats business, which offers cooking classes to tourists and school groups on how to prepare traditional Inuit meals, which includes everything from muskox to Arctic char.

In its 2016 food report card on provincial performance, the Conference Board of Canada graded Nunavut the lowest on Indigenous food security, with 51 per cent of Inuit reporting moderate to severe food insecurity. Because of the high food prices in the North, the profit from the business would help locals in Nunavut access fresh groceries – this was the most important aspect of the pitch to both partners.

Mr. Keenainak said he remembers coming to Ontario a few years ago for the first time and being shocked at the food prices. "When I was young I always thought the prices in Nunavut were like that everywhere, until I went to more southern places and seeing the major differences," he said. "I felt surprised and upset, it took me a while to just understand."

Melanie Qaqqasiq, 14, and her partner Divine Nwaokocha, 17, of Brampton won a third place scholarship of $7,000 for their plan to launch an affordable movie theatre chain called Apex Cinema in Nunavut.

The theatre would offer youth discounted prices and would prioritize films by Inuit directors and those starring local talent.

"Mental health is a challenge we face both in the North and South," Mr. Nwaokocha said. "But there are limited resources in Nunavut, not enough cinemas and so our theatres would aim to provide youth with a healthy avenue for entertainment."

Lizabeth Demavais, Riya Karumanchi and Anjana Somasundaram won the grand prize of $13,000 for their idea: Inuk, an Inuit-inspired bracelet company. The profit from their business would be used to support education, mental health and food security initiatives.

The traditional bracelets would be designed by Inuit artisans in order to inspire people across Canada to respect and appreciate Inuit culture.

Natan Obed, the president of the national Inuit organization, Inuit Tapiriit Kanatami, said he is deeply proud of the youth from Nunavut for sharing their skills, leaving their small communities and coming to a city many of them had never been to.

"You could see that people in the room had a greater understanding of Inuit culture and identity and the resilience and strength of our culture and society," Mr. Obed said. "It gives people deeper perspectives and also a life view that includes Inuit people instead of imaginings that there are Inuit people."

The bond established between the teens was evident during the final business pitching event, which wrapped up the exchange. Like many of the others, Ms. Qaqqasiq, of Naujaat, Nunavut was in tears, saying goodbye to her new friends.

"We shared so much with each other, we spoke about truth and reconciliation," said Ms. Qaqqasiq, whose family was affected by residential schools. "We talked about what happened in the past and that made me feel better. We've promised to keep in touch."

Margaret Wente in Nunavut: The power of resolve and hope in the North
Subscriber content
August 18, 2017 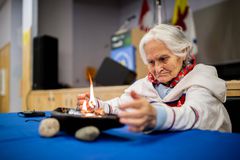 In Nunavut, a record label grows strong and free
May 26, 2017
Teacher turns to crowdfunding to buy greenhouse for Nunavut students
April 30, 2017
Follow us on Twitter @globeandmail Opens in a new window
Report an error Editorial code of conduct
Due to technical reasons, we have temporarily removed commenting from our articles. We hope to have this fixed soon. Thank you for your patience. If you are looking to give feedback on our new site, please send it along to feedback@globeandmail.com. If you want to write a letter to the editor, please forward to letters@globeandmail.com.
Comments