"We met Simon and he signed her on the spot," Monica Cidade Russell, Heather's mother, said from her Toronto home on Thursday.

Heather has been singing and writing music with her father since she was 3. James Russell, a singer/songwriter, has an in-home studio where he would record his young daughter. By the time Heather was 5, her parents knew her talent was out of the ordinary. It wasn't long before Heather was playing piano and writing her own songs - and performing them with a voice that has earned comparisons with Janis Joplin, Mariah Carey and Ronnie Spector.

When she was 8, Heather wrote and recorded a song she called You're Beautiful. Posted on YouTube, the video of the slightly awkward schoolgirl in a purple sundress belting out a big love song went viral.

Last spring, a friend sent it to Rob Fusari, the Grammy-winning New Jersey-based music producer credited with discovering Lady Gaga. (He was an executive producer on Lady Gaga's first album and co-wrote some of the songs, including Paparazzi. He is also partly responsible for Lady Gaga's name.)

It was a Sunday afternoon, and Mr. Fusari - who has also worked with Britney Spears, Destiny's Child and Whitney Houston - gets a lot of online submissions, so he wasn't all that interested. But his girlfriend insisted he have a look.

"Within 10 seconds, I was numb," Mr. Fusari said from New York on Thursday. "I couldn't believe what I was looking at. I asked her to shut it off; I couldn't even make it through the whole performance. I was just so enamoured. My mind was going a mile a minute with ideas."

He was on a plane to Toronto within days. In person, he was gaga again. "She played for me and I was weak. I was weak. I felt like I was watching history happen, music history.

"It's crazy. At nine years old, nobody sings like that. We haven't seen this since Michael Jackson."

They started working together, recording. Mr. Fusari played some tracks for music producer Marvin Howell, who played them for Mr. Cowell, the former American Idol judge who co-owns the Syco label with Sony Music Entertainment. On May 31, Heather met with Mr. Cowell in London.

"Heather performed one song for Simon, and Simon was enamoured like everyone else," said Mr. Fusari. "He really was out of his mind. He couldn't believe what he was seeing. He offered to sign her to a record deal."

The details of the three-country contract were worked out last October, according to Mrs. Cidade Russell. "Simon was wonderful," she said. "He gave her an awesome contract."

Word of the deal leaked out this week. The album is expected to be released later this year.

"There are so many songs to choose from already," Mr. Fusari said. "She's just a machine when it comes to writing."

(Weirdly, in a not-related story, another 10-year-old Canadian, Maria Aragon, has gone viral on YouTube with her interpretation of Lady Gaga's Born This Way, about which Lady Gaga tweeted on Thursday: "Can't stop crying watching this. This is why I make music. She is the future.")

Heather, who turned 10 last August, is still in school, and largely unaffected by her thrust into the spotlight, her mom says. At home, she loves playing the piano, hanging out with her five-year old brother Robin, and eating pizza and chocolate chip cookies.

"She's a breath of fresh air," said Mrs. Cidade Russell. "She's so relaxed, down to earth. This really means nothing until she's on stage. She's just like, 'Yeah, this is all great. But when do I perform?'" 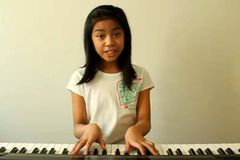