Transit City is back. A year and a half after Mayor Rob Ford killed the massive project, it has returned from the grave to haunt him with an urbanist's vision of sleek mega-streetcars rolling along the centre of suburban avenues.

The provincial transit agency Metrolinx summoned reporters to its 20 Bay St. headquarters on Tuesday to unveil plans for a web of suburban light-rail lines that look remarkably like the project Mr. Ford cancelled on his first day in office.

City council rebelled and voted decisively to revive it in two bitterly contested votes this winter. Now that Metrolinx Chief Bruce McCuaig and his staff have okayed the new/old plan, the Metrolinx board is expected to add its voice on Wednesday. Approval from the provincial cabinet should follow shortly.

That, by rights, should be the end of it. Now that the plan has been approved, killed, then re-approved, it would be absurd to do it in again, wouldn't it? In Rob Ford's Toronto, you can't rule anything out.

The mayor's brother and wing man, Doug Ford, is vowing to keep fighting light-rail all the way to the next election. "The people of Toronto will have to decide this," the Etobicoke councillor told The Globe and Mail's Elizabeth Church. "We are going to run on subways and it will be a clear message to the politicians that don't want to listen ...they are going to be held accountable."

What if the Fords run against light-rail in 2014 and win? Would the mayor try to pull the plug again, with construction perhaps already under way?

Even if he doesn't do that, expect Mr. Ford to work the issue for maximum political advantage. It so happens that work on the Sheppard line will start in an election year, giving him a juicy issue in vote-rich Scarborough. It is not hard to imagine the mayor campaigning next to a messy construction site on Sheppard, claiming that downtown elites thwarted his plan to bring real rapid transit (that is to say, subways) to the suburbs.

What, for that matter, if the minority Liberals lose power and the Conservatives take office under Tim Hudak, who has backed the Fords' unfunded subway dreams? Does that open the whole can of worms once more?

Metrolinx, after all, is a creature of Queen's Park. Its approval of the light-rail transit plan is important, but hardly definitive. Although it was created as an arm's-length agency to give the government impartial advice on transit, it has showed no inclination to go against the political grain. When Premier Dalton McGuinty's Liberals bowed to Mr. Ford in his initial decision to scrap Transit City, Metrolinx went meekly along.

The $8.4-billion plan to build transit lines on Eglinton, Sheppard and Finch seemed as dead as a subway rail even six months ago. Then came the famous city council revolt led by Toronto Transit Commission chair Karen Stintz, whom the mayor made the mistake of crossing.

Now it's back in everything but name. The blueprint produced by Metrolinx shows the same four LRT lines that were in the Transit City plan before Mr. Ford became mayor in December, 2010. Light-rail cars will whoosh along the centre of streets that until now have been the exclusive province of wheeled vehicles. It is David Miller's dream come true, and Mr. Ford's worst nightmare.

But now, Metrolinx says the project is full steam ahead again. Construction on the biggest piece, the Eglinton-Scarborough Crosstown line, never stopped. Work on the new Scarborough RT and the Sheppard East LRT is to start in 2014, and on the Finch West LRT in 2015.

It almost seems as if the bizarre interregnum of the past 18 months had never happened. Mr. McCuaig even argued, a little improbably given how transit expenses tend to soar over time, that the cost of the project would stay the same despite the year and a half of needless delay. All of the transit lines, he said, would be completed by 2020.

Even if that proves right, the hiatus was silly and wasteful. Transit City was approved, funded and about to get under way when Mr. Ford took office. Without even bothering to consult city council, he pronounced it dead. Scores of engineers and planners were hard at work and construction crews were gearing up.

The 18-month pause means the Sheppard line, which was supposed to be complete for the 2015 Pan American Games, will be a work site when the games open. The pause may also mean paying penalty fees to the maker, Bombardier, for delays on the order for 182 light-rail cars. Metrolinx says that will have to be negotiated.

Transit building in Toronto has been a haphazard, on-again-off-again affair for decades. We may see more on-ing and off-ing yet. 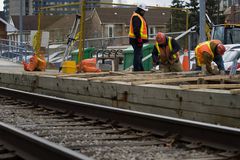 74% in Toronto area support small sales tax hike if money goes to transit: poll
May 8, 2018
L.A. transit advocate has some advice for Toronto politicians
May 8, 2018 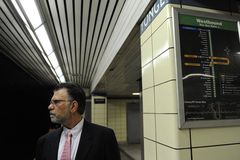 Toronto's Mayor Ford vows to 'lead the charge' in halting light-rail transit
May 3, 2018 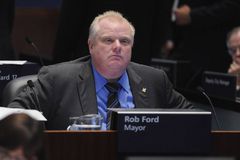