Ali Vahabzadeh often saw two or three buses drive right by stops in his old San Francisco neighbourhood so packed full of people that they could not pause to take on more. Commuters were left fuming on the curb, a rush-hour problem from Tokyo to Toronto.

That got him thinking. In his travels around the world, he had often seen private minibuses and other forms of so-called microtransit take up the slack in overburdened or inadequate public transit systems. If Kathmandu or Rio de Janeiro could do it, why not San Francisco?

Today, he runs Chariot, a microtransit service that operates 70 15-seat Ford vans on a network of eight routes with names such as California Dreamin', Pacific Rush and The Great Haight (after Haight-Ashbury, famous heart of 1960s counterculture). It has grown by leaps since it started up with three vans on one route in April, 2014. Mr. Vahabzadeh, a transplanted New Yorker with a background in finance, drove one of the vans himself.

Calling itself "the world's first crowdfunded network of commuter routes," Chariot asks commuters where they live and where they want to go and uses the data to design and launch new routes. Once enough people sign up for passes, the vans start running. It took all of three hours to get the support for one popular route, the Richmond Racer.

Contrast that with the years of planning and millions in funding it takes to get most new public transit lines up and running and the appeal of microtransit becomes plain.

Mr. Vahabzadeh is not the only one to spot the opening. In several cities across North America, new companies using smartphone apps and complex computer algorithms are stepping forward to fill gaps in crowded, underfunded public transit systems.

The idea came to Canada this month when ride-hailing company Uber launched a new commuting service, UberHop, in downtown Toronto. It offers rush-hour rides to Toronto's financial district from four spots – CityPlace, the Distillery District, Liberty Village and Fort York – and advertises a flat fare ranging from $3.50 to $4.50.

After UberHop started running, the official reaction was defensive. Authorities said they were exploring whether the service was legal. The head of the transit workers' union, Bob Kinnear, said "the last thing we need is a gaggle of unlicensed, unregulated and uninsured gypsy drivers further clogging our roads during rush hour for a few extra bucks."

But there is another way to look at UberHop and services like it – not as a threat but as an opportunity. Combined with other new services such as app-accessed ride hailing, car sharing, bike sharing and car pooling, microtransit could help change how people move around cities, using private services that mine rich veins of data to get them where they need to go.

Two modes of travel have dominated commuting in North America for decades: the private car and public transit. The first offers flexibility and convenience at the cost of polluted air and gridlocked roads. The second offers greener collective travel at the cost of convenience and flexibility. Microtransit attempts to bridge the two, combining the economy of travelling together with some of the flexibility of driving alone.

The idea is not new. Even in the developed world, dollar vans, jitneys and company shuttle buses have plugged holes in the commuting network for years. What has changed is the technology. With the spread of GPS-enabled smartphones, riders can be linked and transported together in smaller vehicles, sometimes travelling on changing, flexible routes according to demand.

In New York and, since last month, Chicago, commuters who sign up for the Via service can book from their phones, get picked up on a nearby street corner and share a ride with others going the same way. In Boston and, since August, Washington, Bridj picks up riders in shuttle buses for $3 (U.S.) to $5. The Bridj algorithm sorts pickup requests and sets a central meeting spot. Passengers go to the spot, get on the bus and travel with others heading for a similar destination.

A new research paper found that microtransit and other forms of "shared mobility" had the potential to reduce the number of cars on the road, cut the distance driven and fill gaps in public-transit networks. They could also help solve the so-called first-mile, last-mile problem. Commuters might want to, say, ride the subway to work but cannot figure out how to make the trip quickly or easily to the first subway stop or from the final subway stop to work. The idea has special promise in the suburbs, where commuters often face a long journey between a transit hub and home.

"There is an awful lot of change coming online very fast that absolutely could be transformative," says Susan Shaheen, a professor at the University of California, Berkeley, who was one of the authors of the research paper. "It presents an opportunity to rethink public transit."

Not everyone sees it that way. Some transit advocates fear private services will draw away the riders and revenue transit networks need to keep the trains and buses running. Toronto transit writer Steve Munro says services such as UberHop are not doing the city any favours.

"They are cherry-picking an area where there's lots of people who have disposable income, the transit service is crap and there is such a huge demand between those areas and downtown. They take a little tiny sliver of it and they're ahead of the game." He doubts the entire UberHop fleet will carry more than a couple of streetcars worth of morning commuters.

And what if your local microtransit provider goes bust? That happened to Leap, a San Francisco service that offered free WiFi, iced coffee and "cold-pressed juices." Quickly dubbed the "hipster bus," it filed for bankruptcy this year after hitting regulatory hurdles. Critics of microtransit say public transit is the more stable option. Better to support it, they say, than open the door to unreliable rivals and risk creating a two-tier transit system.

Microtransit companies counter that, in fact, they can help public transit systems by making it easier for passengers to get to and from mass-transit stations; filling service gaps in bus or subway systems without the huge expense of new infrastructure; and saving the cost of running big half-empty buses along transit routes or through lightly populated suburbs. They can even offer an alternative to the expensive "paratransit" systems for disabled passengers that many cities have.

"Via's mission is to complement, not compete with, public transit," Zachary Wasserman, vice-president for strategy at the New York service, said in an e-mail interview. Via and Mercedes-Benz have just launched a microtransit service in Orange County in California that they call "the first instance of a fully on-demand mobility service in a suburban environment in the United States."

Andy Byford, chief executive of the Toronto Transit Commission, is not close-minded about UberHop and other microtransit alternatives. Although the TTC is looking into whether UberHop violates the TTC's official monopoly on providing transit, he says the launch of the competing option shows the TTC has its work cut out to improve service.

That is the right instinct. Rather than trying to suppress this kind of innovation, cities should explore how it can help them move people. The world of urban mobility is changing fast. One San Francisco-area service, Lift Hero, offers to connect older or disabled adults with friendly, helpful drivers who use their own cars. Another, Shuddle, lets parents book rides for their children to and from school or after-school programs.

At Chariot, Mr. Vahabzadeh hopes to roll out several new routes in the coming months, some of them going beyond downtown and linking central San Francisco to the suburbs. He has 80 drivers and 13 office workers. Ridership is up to 12,000 a week. The way he sees it, that is pulling people out of their cars, easing pressure on the roads and the environment.

When he hears people argue that services such as his are a threat to public transit, he thinks back to those people standing at the bus stop as the jammed buses rolled by.

Those people "were trying to do the right thing by taking mass transit, but mass transit was failing them." 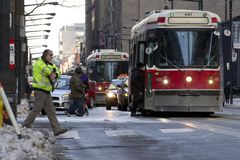