Impresario David Mirvish is about to launch one of the largest productions Canada has ever seen, but rather than outfitting a theatre with fresh sets in anticipation of a new show he'll be tearing down one of country's most iconic playhouses to make way for three of the largest condo buildings in North America.

The Princess of Wales theatre would be sacrificed as part of Mr. Mirvish's broader plan to transform Toronto's King Street theatre district into an arts hub that would include two large art galleries in addition to the planned 2,600 condo units in three towers with as many as 85 storeys each.

It's an audacious plan that has yet to be brought before city planners, but he's convinced the city would welcome the skyline-altering plan, particularly because he's conscripted world-famous, Toronto-born architect Frank Gehry to design the towers which would rival the downtown's famous bank towers in height.

"My family has been involved in the development for almost 50 years and I am thinking about the legacy we want to establish here," Mr. Mirvish said. "What we're trying to do is identify the centre of the entertainment district and the heart of downtown so we have something iconic on the horizon that says you are in Toronto and it is a distinguished and distinct place. It is a vote of confidence of where the city has got to that I believe it will let me do something like this."

The project is designed to be built in three phases over a decade, and the 19-year-old theatre would be demolished (along with several other buildings along King Street) as construction begins on the third and final tower. The base of each tower would be dedicated to high-end retail outlets and gallery space.

Mr. Mirvish owns a collection of seldom-displayed paintings of global significance – artists in the collection include Jack Bush, Anthony Caro and Helen Frankenthaler – that would anchor a 60,000-square-foot gallery that would be free to the public. OCAD University would also have its own gallery in the towers, and would also become a tenant as it moves several of its programs into the complex.

He also hopes that the neighbouring John Street would transform into a corridor focused on the arts. The Canadian Walk of Fame, which is embedded in the sidewalk in front of the Princess of Wales Theatre, would remain.

"I'm not sure if we'll have a fight with this," said Mr. Mirvish, as he explained how he believed the condos were necessary to finance the rest of the project and expressed hope that residents could look beyond traditional concerns about height and density as they consider the proposal. "I'm hoping that people will recognize that this is a contribution and not something we are taking away from anyone. Although we are losing a theatre, I believe it will not weaken my activity in the theatre world."

He added that he felt the city was "overpopulated" with theatre space, and could easily absorb the loss of the 2,000 seat facility that he opened in 1992. He owns the neighbouring Royal Alexandra Theatre on King Street, and rents the Elgin and Winter Garden Theatre Centre in the city's downtown, and said he had no intention of stepping back from the industry despite launching a project that would instantly transform him into one of the largest developers in North America.

"I've had the experience of building a theatre, so five years from now I can re-examine the situation and if this project is successful and I need another theatre I have the ability to build another theatre," he said "That's not something I'm afraid to do."

Mr. Mirvish collects newspaper clippings on subjects he's interested in, and has extensively chronicled Mr. Gehry's career with more than 40 years-worth of articles. The two friends decided this was a way for both to leave a mark on the city. Mr. Gehry, 83, is recognized around the world for such projects as the Guggenheim Museum in Spain and the Walt Disney Concert Hall in Los Angeles. He also designed the Art Gallery of Ontario, but has wanted to do more work in Canada.

"We've been looking at what's been happening in Toronto with the towers and how none of them seem to have anything to do with the city," Mr. Gehry said, adding he used to walk down to the King Street area to collect wood shavings when he was a child so he could build "little cities" in his grandmother's backyard. "We're looking to do something that looks at the city not in a nostalgic way but in a visceral way."

The Los Angeles-based Mr. Gehry conceded the project faces many challenges – it's in its early days and still requires approval from the city. It also dependent on the city's condo market remaining hot, something that is far from a sure thing as the economy shows signs of strain and the housing market begins to show some cracks.

Matthew Slutsky, president of real estate marketing firm BuzzBuzzHome, said the project would create an "instant landmark on the Toronto skyline" and demonstrates the strength of the city's market.

"This will most likely be the last time that these two cultural icons come together to work on such a city-building project," he said. "It demonstrates the confidence in our real estate market at a time when the general perception is that the market is on shaky ground."

Editor's note: David Mirvish rents the Elgin and Winter Garden Theatre Centre. Incorrect information in an earlier version of this article has been corrected. 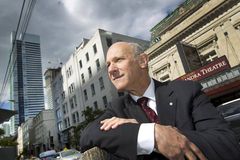 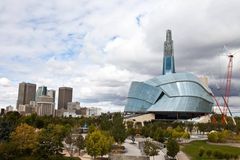 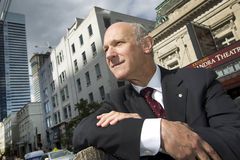