Sometimes the best stories can be found just up the street. A minute's walk from my front doorstep lies Dundas Street West. Until 10 or 15 years ago, it was a drab strip of sports bars, karaoke joints, dollar stores, video outlets and Portuguese groceries. No one ever accused it of being too trendy.

Now it's one of the hottest streets in the city. A new café seems to open every week. The Italian deli on the corner sells prosciutto and fresh baguettes. Restaurants serving a galaxy of cuisines draw diners from around the city. Tiny boutiques offering small collections of rarefied items at a staggering price have appeared out of nowhere. The ancient shoe repair run by an ancient man is now run by earnest young people who consider cobbling a kind of art form. A pop-up store opened selling nothing but hand-crafted money belts.

Dundas West is just one example of a phenomenon seen around the developed world in recent years. Gentrification, the disparaging label attached to it, is transforming cities from London to Philadelphia to Shanghai. Young, creative and entrepreneurial types are invading old, rundown areas of central cities and sprucing them up. Warehouses become artists' lofts, plumbing stores become yoga studios, fixed-gear bicycles proliferate and every young man in sight looks as if he is on shore leave.

Not everyone likes it. Critics say gentrification forces up rents, inflates house prices and pushes out established residents, who can't afford to live in the places they call home.

In fact, the effects of gentrification are mostly positive. Gentrifiers, who like old things, restore century-old houses and classic storefronts to their former glory, bringing new beauty to streets grown shabby with time. The creative businesses they start produce jobs for residents and tax revenue for hard-pressed city governments. Commercial avenues like Dundas teem with new life as people from all around come to shop and eat and work.

Some established residents and businesses sell out and leave, often realizing a real-estate windfall in the process. Others stay. My strip of Dundas still has two thriving Portuguese-run butchers, a Portuguese-run travel agency, a hardware store and two barber shops, all of which have been in business for years.

What is even more important than the wealth and street life that gentrification brings is the new attitude that it represents. Hipsters adore cities. They flock to streets like Dundas West because they are drawn to its gritty authenticity. Gentrification is just a sign of the world's growing love affair with city life.

Young couples who used to dream of a white picket fence and a big lawn now yearn to live near a transit line, a school their kids can reach on foot and the place that makes their favourite grind. Older couples who might once have retired to a spread in the country now move to downtown condos to be close to the museums, galleries, theatres and sports stadiums. Companies that might have put their offices in the suburbs for the cheap space and plentiful parking now locate downtown so they can recruit bright young things who love the buzz of the city.

That is a huge and encouraging change. In the decades after the Second World War, the flight to the suburbs left many North American central cities hollowed out. The inner city became associated with crime, disorder, decline and chaos. New York hit its nadir. Hollywood movies portrayed cities overrun by gangs and strewn with garbage. Even in Canada, which avoided the ghettos and the white flight, the inner city was a place that successful people fled. Now it's where they want to be.

That can't be a bad thing. To the contrary, it's a very good thing. Having lots of people living in the denser city core is better for the environment (fewer cars trips, smaller homes to heat and cool) and better for human health (more walking, less driving). Modern cities where people live and work side by side are beehives of cultural and economic activity. Their ever-growing diversity and vitality exerts a magnetic force on the ambitious and inventive.

The change sweeping those few busy blocks on Dundas is part of something big – a grand rediscovery of the wonders of the city. And to think it is happening just up the street. 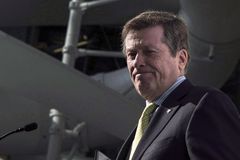 Toronto’s Old City Hall should have a use that fits its grandness
September 30, 2015