An ambitious plan to demolish Toronto's dated west-end Galleria Shopping Centre and replace it with a sleek mix of condos, shops, office space, a new community centre and a large park is expected to get a rough ride as it includes a cluster of towers, one as high as 42 storeys, more than twice the height now allowed on the site.

"I think it is completely out of context and the character of the neighbourhood," Ana Bailao, the local city councillor, said of the proposal from a joint venture of ELAD Canada and Freed Developments, which were to file a master plan with the city on Friday.

Ms. Bailao said the towers could create shadow impacts, and she has concerns about traffic and the strain on public transit that the dense development could create.

Still, she said there were many good things in the plan to rip up and redesign the site near Dupont and Dufferin Streets, a rapidly gentrifying area traditionally home to the city's Portuguese community.

Ms. Bailao praised the developers for launching community consultations over the past year and incorporating that input into their designs, which include a fully funded and expanded community centre to replace the aging existing one.

However, those consultations did not involve discussions of anything 42 storeys tall – a height that even the developers acknowledge will generate some opposition in the community.

The plans for the Galleria site clump the location together with the existing Wallace Emerson Community Centre to the south. The land would be dissected by a new diagonal road, with the area to the south turned into parkland. To the north, two new streets and a pedestrian walkway would be lined with two floors of ground-level retail. The condos, 3,400 units, would then be stacked on top. In all, the site would include 12 towers, most 12 to 22 storeys, but with three along Dupont at 36 storeys, 42 storeys and 34 storeys.

The developers say their consultation process was unprecedented, as they recognized the unique character of the Galleria mall, which opened in 1972 and which the Portuguese community treats as a gathering place. The developers say the consultations prompted them to take the unusual step of trying to incorporate a large park and a new community centre all in the same proposal. They also plan to build more retail space than currently exists in the Galleria into the new development.

An open house is scheduled for Oct. 15 to allow members of the community to see the plans and have their say. The developers also plan to install a storefront in the Galleria to engage the residents and increase awareness around the development's objectives. It could take 10 to 15 years for the project, if it goes ahead, to be completed.

After entering the brown-brick slab that is the Galleria mall on a weekday lunch hour, shoppers pass by several groups of grey-haired men standing around or sitting on the wooden benches, talking animatedly in Portuguese. The yellow-brown floor tiles and the oldies Muzak betray the mall's 1970s roots.

Other than a Rexall, FreshCo grocery store, Dollarama and Fabricland, most of the stores are small brand-name-free operations. One sells soccer jerseys, another Jesus figurines and others knickknacks. It also has the first Canadian location of Planet Fitness, which gained notoriety through the U.S. TV show The Biggest Loser.

One small shop owner, speaking on condition of anonymity, said most of the smaller stores are on month-to-month leases. Some have been in the mall for decades. But he doubts that many will be able to afford rents in the new, gentrified retail space that will replace the mall.

Still, he says, the Galleria has seen much better days. He says few people seem to buy anything any more. "To be honest, nobody is making money," he said. "Just [enough] for living." 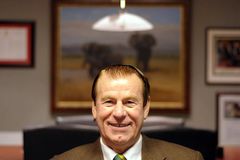 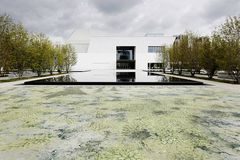