Toronto Mayor Rob Ford is being called homophobic after he took exception to the flying of the rainbow flag at city hall during the Olympics, saying the games are about "being patriotic to your country" and not about "sexual preference."

Toronto's controversial mayor caused a commotion Friday, demanding the flag come down less than an hour after it was raised on the ceremonial flag pole at city hall – a show of support being made by several Canadian cities for the LGBTQ community in light of Russia's anti-gay laws.

Mr. Ford responded to the flag-raising by putting up a large Canadian flag in his office window over the front doors of city hall. On his way outside to inspect his work, he expressed his dismay to reporters.

Mr. Ford said he was asking the city manager to take the flag down, but a spokeswoman for the city said no request was received. The flag was put up following established protocol, a memo from City Manager Joe Pennachetti confirmed.

Despite an attempt at compromise by one councillor, Mr. Ford left his office Friday saying he still wants the flag down.

Councillor Kristyn Wong-Tam, an openly gay member of council, helped to organize the flag raising at the request of PrideHouseTO and a community centre located in the city's gay village.

"I believe Rob Ford is letting it all hang loose," Ms.Wong-Tam said. "I think he is clearly demonstrating that he is homophobic, that he is bigoted."

Ms. Wong-Tam said cities from Vancouver to St. John's are flying the rainbow flag during the Olympics. "It doesn't take anything away from Canada. It dovetails into the Canadian values we already know, which is standing up for human rights," she said. She and Deputy Mayor Norm Kelly issued a joint statement in support of the flag.

A large Canadian flag is a permanent fixture in Nathan Phillips Square, flying near the landmark Henry Moore sculpture. The rainbow flag is flying on a smaller flagpole on the second-floor green roof of city hall, used to mark special occasions.

Earlier this week, Mr. Ford told an all-candidates meeting that he would not attend this year's Pride events when Toronto hosts World Pride Day. He has never attended the city's Pride parade, but has said it is because of family obligations.

At the time, Councillor Shelley Carroll described those remarks as "thinly veiled" homophobia, but Friday she said the mayor "took away all pretenses and all nuance."

"It's kinda not thinly veiled any more. Yes, this stubbornness really speaks to homophobia," she said.

Earlier this week, Councillor Doug Ford said his brother the mayor is not homophobic and that he has gay friends.

Councillor John Parker said "the fact that that flag is flying at this time when the world is outraged at the comments and behaviour of Vladimir Putin suits me just fine. I'm sorry that Rob Ford has decided to align himself with Vladimir Putin."

Councillor Sarah Doucette vowed to fight any attempt by the mayor to take the flag down, saying councillors have told the city manager they want it kept up. "It was asked for in the correct way. It was authorized in the correct way. Should one person – okay, he's the mayor – should he be allowed to dictate what flags fly there? No," she said.

Also on Friday, two uniformed officers visited the mayor's office."The police are here regarding a message we received about a potential threat to the Mayor and his family," the mayor's spokesman wrote in an e-mail. A Toronto police spokesman confirmed that they received "a call for service and we're investigating."

Vancouver, the first Olympic host to include a Pride House, is flying the rainbow flag in support of LGBTQ rights, as well as Vancouver's Host City Pride mission in Sochi. Vancouver Deputy Mayor Tim Stevenson, who is openly gay, is in Sochi to press International Olympic Committee officials to support gay and lesbian athletes, including sexual orientation in the IOC's charter. 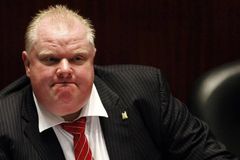 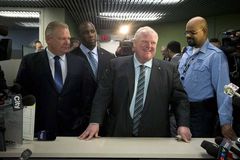 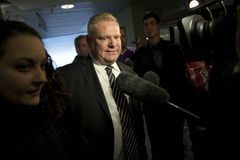 Follow Elizabeth Church, Marcus Gee and Jill Mahoney on Twitter @lizchurchto @marcusbgee @jillsmahoney
Report an error Editorial code of conduct
Due to technical reasons, we have temporarily removed commenting from our articles. We hope to have this fixed soon. Thank you for your patience. If you are looking to give feedback on our new site, please send it along to feedback@globeandmail.com. If you want to write a letter to the editor, please forward to letters@globeandmail.com.
Comments