His personal life has always been an open book, whether he was serving as the right-hand man to Ontario's premier, running for mayor or, in his own words, becoming a "recovering politician."

And now George Smitherman is back in the headlines as Toronto police search for his husband, who has been missing since Monday afternoon.

Christopher Peloso, 39, was last seen at around 4 p.m. in the Davenport Road and Bathurst Street area, according to Toronto Police. They said he may suffer from a medical condition and fear for his safety, but did not elaborate.

Toronto Police said Wednesday morning that they have received some tips – including one that Mr. Peloso may have been spotted Monday evening around 6:30 p.m. near Dupont Street and Lansdowne Avenue – and that they are currently following up on every lead.

During the decade that Mr. Smitherman spent in former premier Dalton McGuinty's cabinet and his unsuccessful run for Toronto mayor, Mr. Peloso was often a very visible member of his support team.

Mr. Smitherman was Ontario's first openly gay cabinet minister. He left provincial politics in 2009, resigning as deputy premier to run in Toronto's mayoralty race. He was defeated by Rob Ford.

Mr. Smitherman released a brief statement on Tuesday, confirming that his husband had been missing for almost 24 hours. "Michael, Kayla and myself, with the support of family and friends, are hopeful that our husband and father will be home safely soon," he wrote.

Liz Pettigrew, who lives in Alberta, is a high-school friend of Mr. Peloso from his hometown of Sudbury in Northern Ontario. She communicated with him last week. "He's just a fantastic human being and I hope somebody hasn't hurt him," she said. "Loves his children, and his family, his husband. He's a great friend."

Mr. Peloso worked as a director of retail operations for chocolatier Lindt Canada until "a few years ago," according to the company's human resources staff. A source close to the family said he left Lindt to stay home to care for Michael, 4, and Kayla, 3.

About a week ago, the couple placed their brick, semi-detached home near Bathurst Street and Davenport Road up for sale for $749,000. They had originally moved to the home about three years ago from a downtown condo so that their children would have more room, realtor Richard Silver said, adding that the couple had renovated a space on the lower level to play in, as well as built a playhouse and sandbox in the backyard. More recently, they were planning on selling the house and moving back to a smaller place in the city.

Mr. Silver, who has known the couple for about 12 years, called Mr. Peloso a "very warm, very level, very good person," and described the disappearance as "totally out of character" for the man.

He added that he has spoken with Mr. Smitherman since the news broke, saying the former politician is going through "absolutely sleepless nights, just on tenterhooks waiting to hear from Christopher."

Mr. Smitherman and Mr. Peloso exchanged vows in 2007 at a wilderness retreat in the former mining community of Elliot Lake – an event attended by 200 family members and friends and widely covered by the media.

Days before their wedding, Mr. Smitherman told The Globe and Mail that Mr. Peloso had helped him find a healthier work-life balance, which included a standing date to watch The Amazing Race every week. In the early 1990s, before he was first elected as a Liberal MPP in the provincial riding of Toronto Centre, Mr. Smitherman said he was very involved in the nightlife scene in the Village in Toronto. He said he had a multiyear addiction to "gay party drugs," though he did not specify which ones.

Mr. Smitherman met Mr. Peloso in 1994, when he was "fresh off the bus from Sudbury." They dated on and off, with long breaks in between.

"I was just slow to mature," Mr. Smitherman told The Globe in 2009, saying Mr. Peloso's "enduring" love helped him get his act together.

In addition to their two children, Mr. Peloso has a 20-year-old daughter, Morgan, who lives in Sudbury.

With reports from Ann Hui 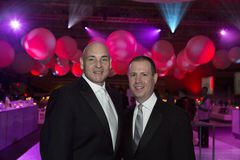 Smitherman bows out of race for Liberal nod in Toronto Centre
July 29, 2013 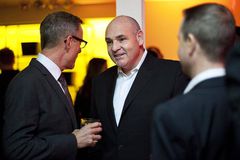 Follow Karen Howlett and Dakshana Bascaramurty,  on Twitter @kahowlett @DakGlobe
Report an error Editorial code of conduct
Due to technical reasons, we have temporarily removed commenting from our articles. We hope to have this fixed soon. Thank you for your patience. If you are looking to give feedback on our new site, please send it along to feedback@globeandmail.com. If you want to write a letter to the editor, please forward to letters@globeandmail.com.
Comments