It was a story that played out almost entirely in pixels, except for a few terrifying minutes in "real life," as teenagers say.

That is why many parents in Pickering, Ont., were likely puzzled on Tuesday night, only hours after a mass stabbing at a local high school, as their children were going to bed.

The students, earlier angry and scared, were full of sympathy for the 14-year-old girl police accused of the crime. Even one of the students slashed at – none of the seven people who were cut were seriously injured – later began changing his tone, said a family friend of his, Zahra Vaid, who texted with him later.

"He started feeling really, really bad for this young girl," said Ms. Vaid, 21, whose sister goes to a school near Pickering's Dunbarton High School, where the stabbings occurred.

What changed? The discovery of the suspect's Tumblr blog, and then an intense debate over its contents among her peers in texts and on Twitter, Facebook and other social media.

It was a whirlwind conversation that many of their elders would barely be able to follow, and a resulting empathy that shows that social media can sometimes help as well as hurt, school psychologists say.

"I think that this generation grew up with a new way of communicating … and the clock cannot turn back," said Maria Kokai, chief psychologist for Toronto's Catholic schools and the president of the Association of Chief Psychologists with Ontario School Boards. "We may not entirely understand or appreciate its impact."

The suspect, who cannot be named under the Youth Criminal Justice Act, faces seven charges of assault with a weapon and six of assault causing bodily harm. She is also charged with possessing a dangerous weapon and assault.

For months, a 14-year-old author had recounted her feelings of isolation and suicide attempts in prose and poetry on a blog, writing since mid-January about her growing urge to commit a mass stabbing.

"I'm kinda shaking and freaking out right now because I really want to go to school tomorrow with knives and just hurt and kill as many people as I can," she wrote in January. "I'm pretty panicked. Why can't I just be normal?"

In a later post, she wrote that her mom thought calling police was too "over the top" for her fantasies. "I'll never be ok, I'm too far gone," she wrote. "I've tried to kill myself in the past to prevent this."

After the 8:30 a.m. stabbing, which ended when a teacher tackled the suspect, Ms. Vaid, her 16-year-old sister and many of their friends joined a group chat on texting service WhatsApp.

Students were furious at the suspect, who was known at school as quiet, calling her "crazy," Ms. Vaid said.

"The fact that there was a lack of response to her cry for attention … I think that kind of resonated with people," she told The Globe and Mail.

"Young kids, I think, know that people use their blogs as a diary," she said. "So obviously, these issues are so serious if she's expressing them here. … Most of their lives are spent living behind a screen and I think they know [that] it was easier for her to express these things online."

Hundreds of students weighed in on Twitter, where one student shared the Tumblr posts at about 5:30 p.m. with the comment that they made her "sick to my stomach."

That post was shared more than 600 times, and other students argued back, saying maybe the suspect had been mistreated at school and her cries for help ignored.

"It's crazy how she knew she needed help but just didn't know how to get it / ask for it," one boy wrote.

On Wednesday morning, the stabbing-related posts on the Tumblr account had been removed.

The Durham Regional School Board reopened Dunbarton on Wednesday with extra counselling services for students.

A board superintendent, John Bowyer, said the school had not been aware of the suspect's online activity and that it is difficult to monitor what the 1,400 students are doing on social media.

He said he expects staff will receive further training in the next school year on dealing with student violence.

For Jack Kamrad, chief school psychologist at the Peel Regional School Board, the students' empathy for the mental-health struggles is not surprising.

"My perception of the students is that they're often at a higher level of awareness than their parents and their teachers," he said.

But intense online discussions among teens can have drawbacks, too, he said.

"What we're finding is that teenagers especially are turning towards each other, whether it's face-to-face or on social media, rather than turning to adults," he said.

"It sounds great that they're talking to each other and developing some empathy for this perpetrator, but there's often more to [actions like the stabbings]. … Kids' social perceptions often need to be mediated, not necessarily by a therapist, but by somebody who has a broader perspective." 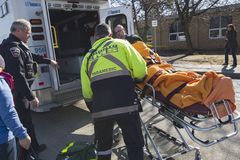