Thousands of e-mails have been released that provide a rare window into how Toronto Mayor Rob Ford's office handled revelations of the crack cocaine video scandal last spring. Here are some of the more intriguing e-mails.

In the e-mail that changes everything, Gawker reporter John Cook contacts Mayor Ford’s press secretary George Christopoulos at 7:30 p.m. on Thursday, May 16.

After forwarding the Gawker e-mail to his colleagues, Mr. Christopoulos is in close contact with the mayor’s then-chief of staff Mark Towhey. In one exchange, Mr. Christopoulos says he is “begging” Mr. Ford to stay off the radio.

Mr. Christopoulos and Mr. Towhey exchange e-mails with Dennis Morris, the mayor’s long-time family friend and lawyer. However, the content of those e-mails is redacted.

At 8:28 p.m., an hour after Mr. Cook’s initial e-mail, Gawker publishes its article under the headline: “For Sale: A Video of Toronto Mayor Rob Ford Smoking Crack Cocaine.” Not long afterward, the Toronto Star publishes a similar story. In the hours that follow, Mr. Christopoulos receives a flood of e-mails from journalists seeking comment, including this one from a CNN reporter.

Although Mr. Christopoulos’s inbox fills with e-mails immediately after the crack report, the inboxes of his colleagues – normally busy with the mayor’s many meeting requests and scheduling changes – appear to quiet down. However, it didn’t look like the staffers stopped talking to one another. The next day, the mayor’s executive assistant Kia Nejatian circulates a note asking staffers for their contact information. Just a few days later, David Price, the mayor’s family friend and director of operations and logistics, sends BlackBerry Messenger “add requests” to at least two others in the mayor’s office.

In the afternoon of Friday, May 17, Mr. Towhey calls a last-minute staff meeting at City Hall.

Mr. Ford’s staffers appear to ignore most of the dozens of media requests they receive, including this one about a rumour Mr. Ford would go to rehab.

An indication of the difficulty staff had in managing the mayor is seen in an exchange on May 22 about the mayor’s attendance at the funeral of Toronto Sun founding editor Peter Worthington. Later, Earl Provost, then the mayor’s deputy chief of staff, responds: “Who tells him no?” Despite his aides’ concerns, Mr. Ford attends the service. 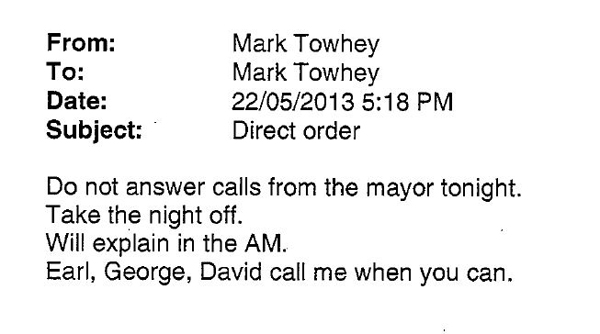 The night before he was fired as Mr. Ford’s chief of staff, Mr. Towhey issues a “direct order” to his employees not to talk to the mayor. Mr. Towhey makes the order after Mr. Ford was told by school board officials that he was banned from his high school coaching duties at Don Bosco Catholic Secondary School. After he got the news, Mr. Ford begins organizing a pizza party for the players at his home, and Mr. Towhey didn’t want staff to be involved in organizing the event, The Globe has reported.

In a June 10 message to a real-estate entrepreneur who was seeking a lunch date with the mayor, Mr. Price indicates that he hopes the crisis is over.