An international competition to revamp the grim ferry terminal that lies at the heart of Toronto’s waterfront has produced five ambitious entries – but money to realize these plans remains to be found.

The current terminal is uninviting, a concrete pen where hundreds of passengers wait in the sun on hot summer days. Elements of the proposals to replace it, and to spruce up the area, include more trees, easier ticket purchase to reduce delays – and a hot tub surrounded by the waters of the lake.

“We’d like to make it a really good experience for people who go there,” said Christopher Glaisek, vice-president of planning and design at Waterfront Toronto.

“It’s not fitting for a waterfront like ours to have such a small, logistically inconvenient and non-commodious facility for something that’s as important as the Toronto islands.”

The designs will be kept on display through this week in the rotunda at City Hall. They will also be available online and public comments submitted by noon Saturday will be considered by the panel making the final selection.

However, there is limited funding currently earmarked. The hope is that making the designs public will start building support that leads to government money being dedicated.

Some highlights of the proposed terminal designs: 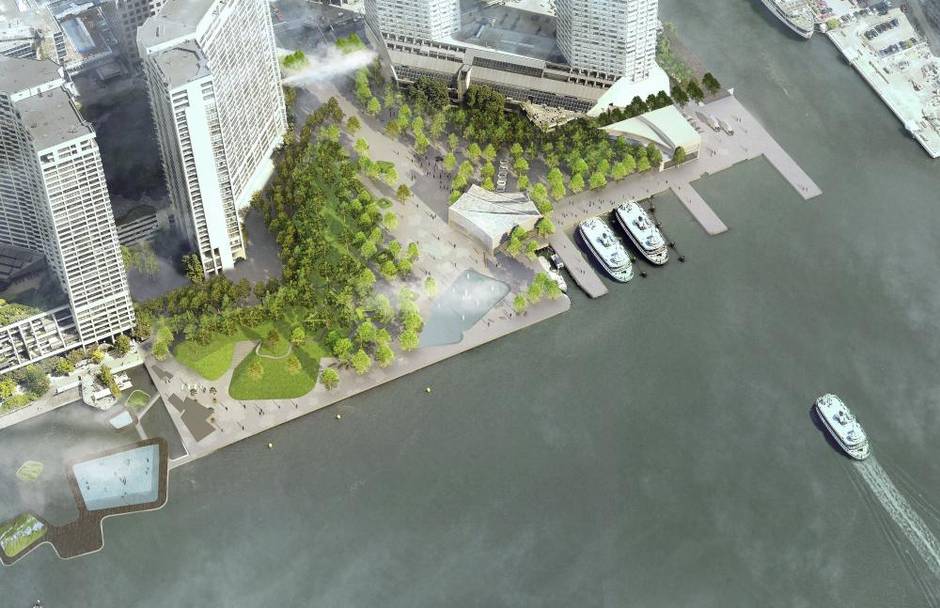 The opening move of this plan would be a literal cloud – mist, to provide a sense “that this is a fantastical place, a place like no other,” Chris Reed said. A series of treed mounds generate a rolling landscape that surrounds a splash pool/skating rink, and a play area. A new terminal building – relatively small in size – would serve as a park pavilion in the cold months. The designers imagine a swimming pool set within the water of the harbour, providing visitors the chance to feel immersed in the lake. The basin to the west would become a site for kayaking, active recreation in the water itself.

The plan’s central element is a long pier-like platform that extends the line of Bay Street up a grand stair (“social carpet”) and reaches out south over the lake; this would meet a belvedere – an open, elevated platform, shaded by trees, that runs east-west across the site. To the east, a new glassed-in terminal building that Blanchet compared to a new Crystal Palace would be brightly illuminated and form “a lighthouse,” a beacon at night. To the west, a new swimming pool (which converts to a skating rink in winter) and playground would help keep the park busy year round. A formal garden that samples the landscapes of the region – orchard, forest, wetlands and sand dunes. 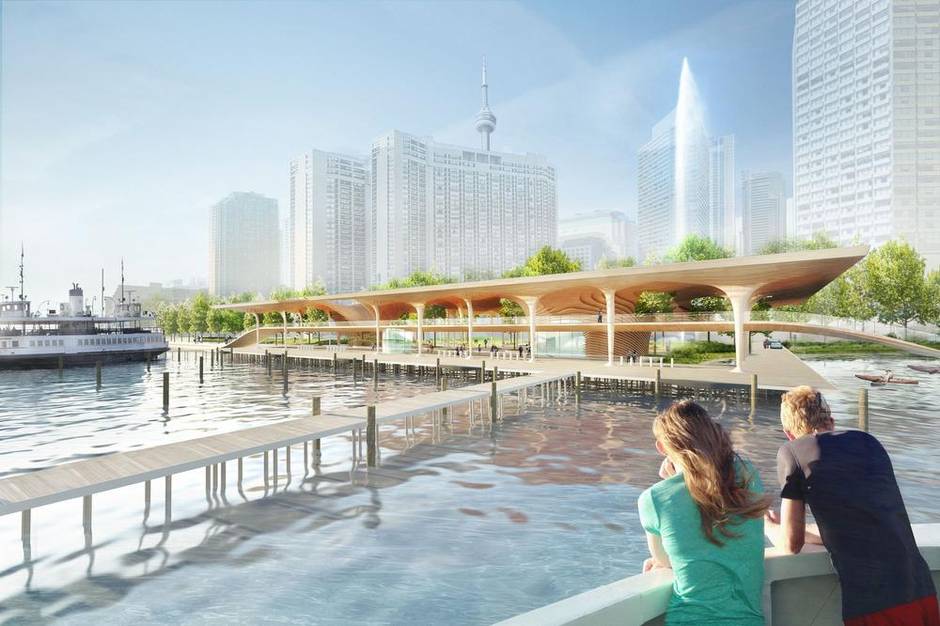 The site, Charles Renfro said, “has an obligation to become Toronto’s new civic icon.” The proposal eliminates the need for a terminal and holding area by wagering on new electronic ticketing technology. Its main element is a soaring wooden structure, “a lifted boardwalk” that will serve as a gateway to the islands and the harbour – and at off-peak times, serve other uses such as markets. Underneath the canopy, a smaller glassed-in “grow house” provides enclosed waiting area. Soft naturalized landscape along the water’s edge, designed by the landscape architect Walter Hood, would also include a large swimmable beach across about half of the site. 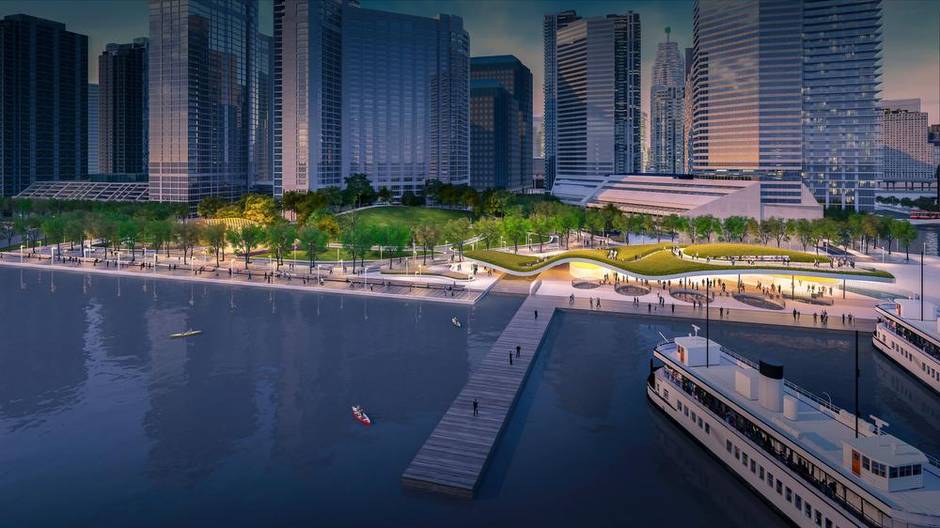 |In this proposal, a new terminal building becomes part of the landscape – its undulating wooden structure topped with a green roof that serves as space for play, recreation and a route for meandering across the site. Underneath this roof would be a glass-walled waiting area. As a quieter counterpoint, the adjacent green space would be planted with a mixture of lawn, glades of trees and flowerbeds, and the main pedestrian route would be a piazza paved in brick. To the west, an enclosed slip would be used for kayaking and, in the winter, converted to a skating rink. The promenade along the lakefront, which was designed by West 8, would be strongly defined here as a treed corridor across the site. 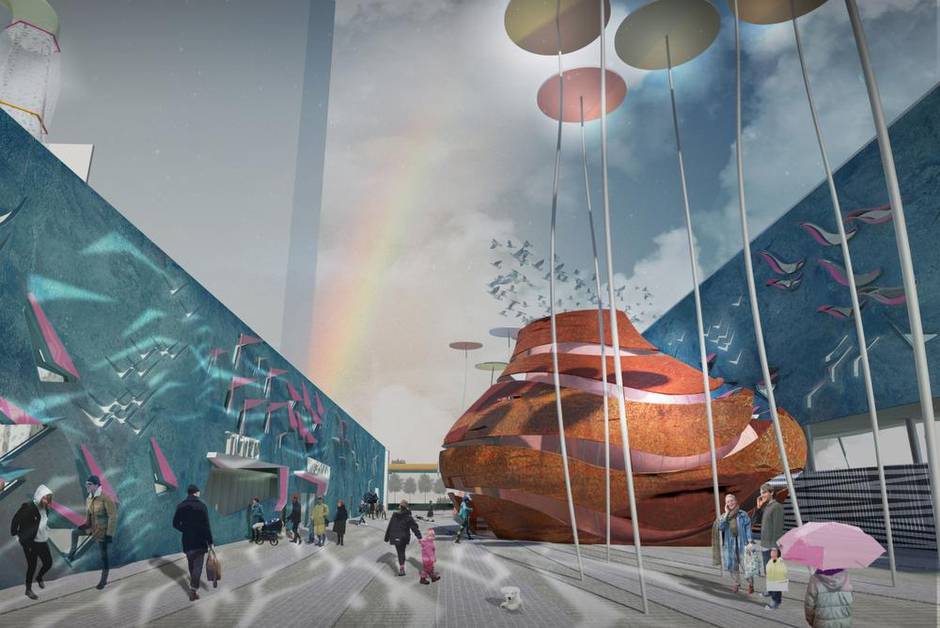 This proposal, led by the English architect Will Alsop, clads fairly straightforward buildings with some wild forms and hot colours. It would create a new terminal building, running east-west along the lake – open at the ground, with a “bar (juice or real)” upstairs, overlooking the harbour and connecting to a long, covered elevated walkway. The terminal building is hot pink, and both the paving of the pedestrian plaza and the roof would feature a bold waveform pattern. And the ground would be spotted with the designers “street creatures,” blobby, vaguely humanoid shapes that enclose waiting areas and ticket booths. The proposal also calls for a wading pool with an “urban beach” that borders a wading pool/skating rink; a swimming pool, at the level of the lake, would occupy the west end of the site.