Torontonians have long been the butt of jokes about calling in the army every time a few snow flurries whip by. But the city can take comfort in knowing that it should be spared the kind of snowmageddon that befell Buffalo.

The massive storm that buried Buffalo and parts of New York State under piles of powder stems from a meteorological phenomenon called lake-effect snow, created when cold wind blows over a warmer water surface – in this case, Lake Erie. 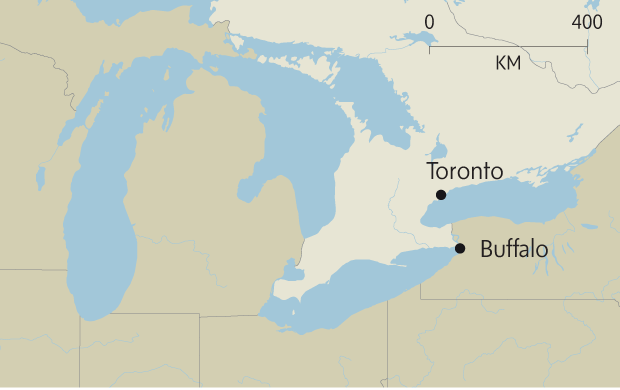 While also sitting near a great body of water, Toronto is rarely struck by lake-effect snow because of its position relative to Lake Ontario.

“The founding fathers of Toronto, whether they realized it or not, did actually pick a location where we don’t get a lot of snowfall. As a matter of fact, of any major city in Ontario, Toronto gets the smallest amount of snow in an average winter,” said Geoff Coulson, an Environment Canada meteorologist.

1. Direction: The cold wind was coming in a direction that was parallel to the long axis of Lake Erie, maximizing the “fetch”, or the time and distance the cold air travels over the body of water. The direction of the low-level wind is the most significant factor in determining who’s going to get hit by these bands of snow,” Mr. Coulson said. For Buffalo, late autumn and early winter brings the most frequent lake-effect snows before Lake Erie, the shallower of the Great Lakes, ices over and reduces the exposed water surface.

Could it happen in Toronto?

Unlikely – and if it did, not as severely as what happened to Buffalo.

The Bruce peninsula and areas east of Georgian Bay are currently facing warnings for snow squalls and lake-effect snows because they are downwind from Lake Huron.

Lake-effect snow is typically carried by band-like streamer clouds and falls in narrow bands of heavy snow. Toronto sometimes gets the tail end of lake-effect snow from Georgian Bay but those are rare and brief occurrences, Mr. Anderson said.

An east wind could also bring lake-effect snow to Toronto and Mississauga but those winds are not common, Mr. Coulson said.